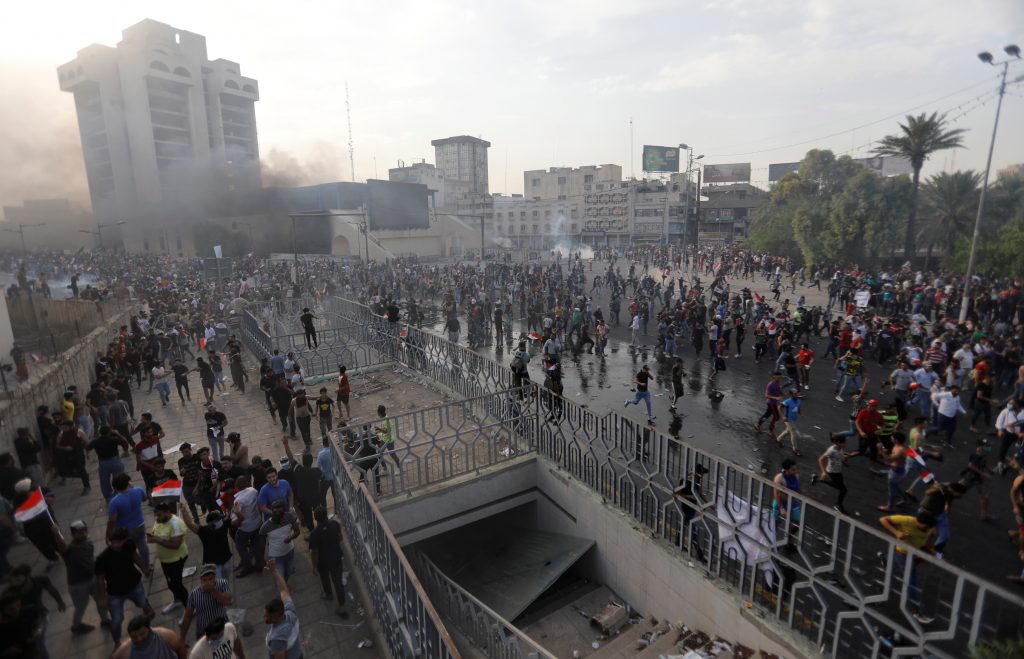 Security forces used live fire and tear gas to disperse demonstrators in renewed protests in Baghdad on Wednesday, a day after at least two Iraqis were killed and 200 wounded in clashes over unemployment, corruption and poor public services.

At least eight protesters were wounded in the Zafaraniya district of southeast Baghdad when police and the army opened fire and launched tear gas canisters to disperse dozens of protesters, police sources said.

In northern Baghdad, about 200 protesters took to the streets of the Shaab district and blocked a key highway linking the capital to the northern cities. Soldiers went into the area to disperse them, police and eyewitnesses said.

The main protest on Tuesday erupted in Baghdad, where one protester was killed, with some demonstrations taking place in other areas, including in the southern city of Nassiriya where a protester was also shot dead, according to police.

A government statement on Tuesday said 40 members of the security forces were among those injured and blamed “groups of inciting riots” for the violence.

The United Nations on Wednesday expressed concern over the violence and urged calm, with the Special Representative of the United Nations Secretary-General for Iraq, Jeanine Hennis-Plasschaert reaffirming in a statement the right to protest.

“Hennis-Plasschaert urges the authorities to exercise restraint in their handling of the protests to ensure the safety of peaceful protesters while upholding law and order and protecting the people, public and private property,” it said.

On Wednesday, security forces blocked several roads in Baghdad, including a bridge that leads to the fortified Green Zone, which houses government buildings and foreign embassies, as part of tightened security measures, a security source said.

“Orders from our commanders are clear and definitive; no protesters are to approach the Green Zone,” said one security official.

In a bid to temper angry protests, Prime Minister Adel Abdul Mahdi on Tuesday issued a statement promising jobs for graduates. He instructed the oil ministry and other government bodies to start including a 50% quota for local workers in subsequent contracts with foreign companies.

Oil-rich Iraq has suffered for decades, from rule by Saddam Hussein including years subject to U.N. sanctions, to the 2003 U.S. invasion and civil war it unleashed, and then the battle against Islamic State, which was declared won in 2017. Graft is widespread and basic services like power and water are lacking.