Car Crashes Into Bus on Ocean Avenue in Midwood

The accident, which occurred shortly after midnight on Friday, September 13, forced the closure of both the northbound lane of Ocean Avenue and the entire Ave J east of Ocean Avenue as police, fire and EMS workers tended to the injured parties and investigated the crash scene.

Motorists are advised to avoid the area for the next few hours until emergency personnel finish clearing the area. 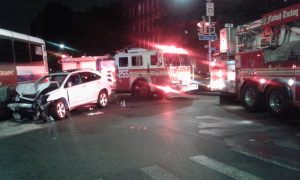