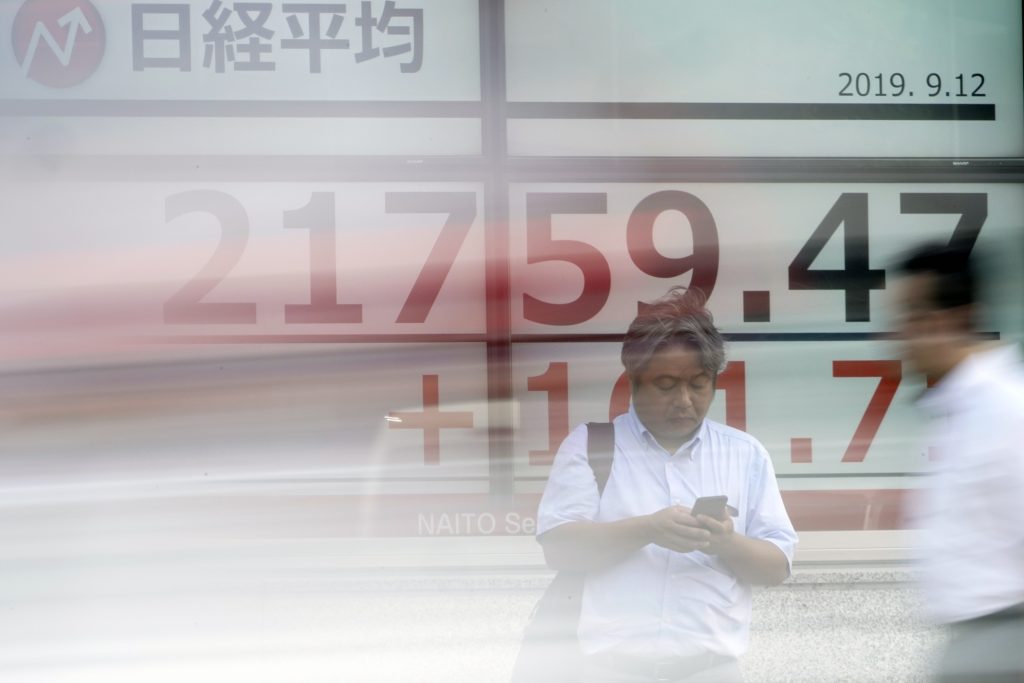 Asian stocks hit a six-week high on Thursday on hopes for a thaw in U.S.-China trade frictions and expectations that the European Central Bank would kick off another wave of monetary easing by global central banks.

MSCI’s broadest index of Asia-Pacific shares outside Japan was up 0.4% and Japan’s Nikkei stock index rose 0.88%. Australian shares were up 0.56%.

Chinese stocks rose and the yuan hit a three-week high after President Donald Trump agreed to delay an additional increase in tariffs on Chinese goods by two weeks at the request of China’s Vice Premier Liu He “as a gesture of goodwill.”

U.S. stock futures jumped 0.42% and safe havens such as the yen, U.S. Treasuries, and gold weakened in a sign of improving appetite for risk.

“Trump’s comments are likely to put a little juice in the market, but it could be gone tomorrow,” said Hugh Dive, chief investment officer at Atlas Funds Management in Sydney.

“Some in the market react to small changes in negotiating positions because Trump is negotiating in the open. I’m more concerned about Brexit, because there is some complacency in the EU about this.”

Oil prices rose in Asia, rebounding from a tumble on Wednesday, on hopes OPEC members will cut output to support prices.

Any easing of concerns about the bruising trade war is likely to help equities extend their rally this month after a tumultuous August.

Investors also await an ECB meeting later on Thursday to see how far policymakers will go to support a flagging economy, given the risks posed by Britain’s divorce from the European Union, commonly referred to as Brexit.

The yield on benchmark 10-year Treasury notes rose to 1.7541%, the highest in more than five weeks, extending a sell-off in government bonds that started on Sept. 4.

Trump’s delay of additional tariffs on Chinese goods comes one day after China said it would exempt 16 types of U.S. products from import tariffs.

The world’s two largest economies have been locked in a year-long battle over Beijing’s trade practices that has threatened to push other economies into recession.

The gestures of goodwill raise hopes both sides can narrow their differences before working-level talks resume in mid-September and high-level trade negotiations that are expected in October.

In offshore trading, the yuan rose to a three-week high of 7.0870 per dollar, while Chinese shares rose 0.35% on renewed optimism about trade talks.

The euro held steady at $1.1013 but traded near a one-week low. The ECB is set to unveil fresh stimulus measures on Thursday but its exact moves are far from certain.

Germany is at risk of falling into recession and inflation expectations sliding, but ECB President Mario Draghi, who hands over the leadership of the central bank to Christine Lagarde at the end of October, will face resistance to aggressive easing from more conservative ECB members.

U.S. crude ticked up 0.77% to $56.18 in Asia on Thursday. Futures tumbled more than 2% on Wednesday following a report that Trump is considering easing sanctions on Iran, which could potentially boost oil supplies.

Asian traders were likely focused on OPEC’s decision on Wednesday to cut its forecast for global oil demand in 2020. OPEC also said all producers have a shared responsibility to support the oil market.

Sterling traded at $1.2328, little changed following a 0.24% decline on Wednesday after a Scottish court ruled that Prime Minister Boris Johnson’s suspension of the British Parliament was unlawful.

Political wrangling over the terms of the U.K.’s exit from the EU has weighed on the outlook for the British pound.