Business How Much Do Trump Tweets Swing the Market? Check ‘Volfefe’
Business 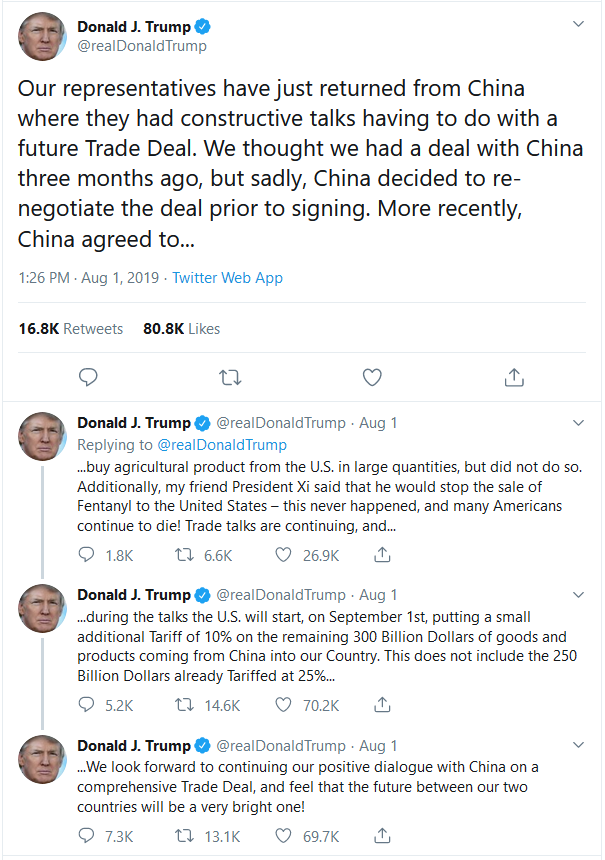 Financial markets have become so in thrall to President Donald Trump’s tweets that J.P. Morgan has created an index to help identify how much volatility they’re creating.

Strategists at the bank developed the “Volfefe” index by measuring which President Trump tweets triggered big movements in Treasury yields, one of the world’s most closely followed markets and one that influences prices for stocks and nearly every other investment. J.P. Morgan said the index, whose name is reminiscent of Trump’s “covfefe” tweet, shows Trump’s tweets explain a “measureable fraction” of volatility, particularly in the market for shorter-term rates.

Trump has gotten more active on Twitter lately, averaging more than 20 tweets and retweets per day, up from five in early 2017. That means more opportunities for tweets that move markets, although only some of them actually do. The ones that have the biggest sway on the market focus on trade and the Federal Reserve, and J.P. Morgan says they often include the words “China,” ”billion” and “great.”

Trump’s tweets often hit the market around lunchtime on the East Coast and can cause a lot of indigestion. Consider Aug. 1, when Trump sent out a tweet at 1:26 p.m., Eastern time, announcing he’d extend tariffs across virtually all Chinese imports.

The tweet shocked markets, and fear climbed that the worsening trade war may knock the economy into another recession. Prices for everything from Treasurys to stocks to gold screeched into a U-turn immediately following the announcement.

Stocks have largely been churning in place since then. Despite several days where the S&P 500 lost more than 2.5%, the index remains only 1.5% below its record set in late July. The S&P 500 also remains well above where it was before Trump’s 2016 election, up nearly 40%.

But the bond market has been knocked further off course. Treasury yields fall when investors are worried about a weak economy and inflation, and the yield on the 10-year Treasury dropped to 1.61% from 1.94% moments before the Aug. 1 tweet.

The yield on the 10-year Treasury sank as low as 1.42% last week, its lowest level since before Trump’s 2016 election jolted yields and stock prices higher.