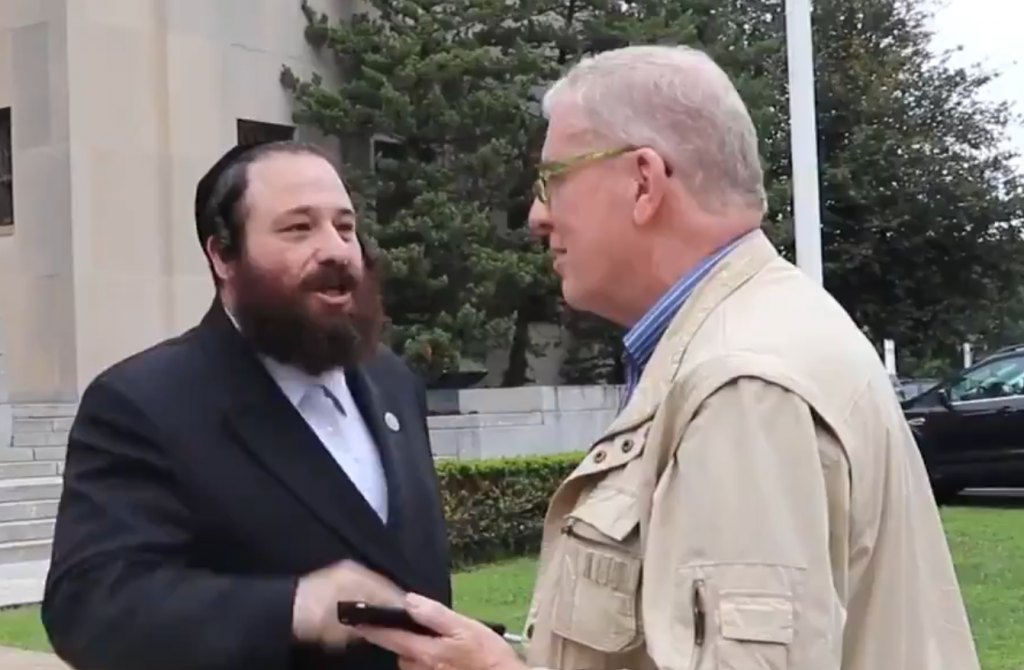 Tuesday night’s meeting of Rockland County’s legislature is expected to be a contentious one, as it is the first meeting following another flare-up in the battle over real-estate development that has been accused of involving thinly veiled anti-Semitism.

A video appeared last week on the social-media page of the Rockland County Republican Party, warning about overdevelopment and threats to the community’s way of life, which was sharply criticized for what many viewed as its anti-Semitic tone. The video was criticized by many prominent officials, including New York Gov. Andrew Cuomo and Attorney General Letitia James, and was eventually removed.

Rockland County Executive Ed Day, who himself has been accused of anti-Semitism, said in a statement that the video “set a troubling tone for a necessary conversation about overdevelopment in our county. While the content of the video is factual, the tone and undercurrent is unacceptable.”

The previous week, Aron Wieder, a Chassidic member of the Rockland County legislature, publicly called Michael Hull, a community activist, “the anti-Semite of Rockland County.” Hull runs a social-media group called “Clarkstown – What They Don’t Want You to Know,” which is critical of the Jewish community.

Lohud.com reports that Hull was just leaving the lawn of the Rockland courthouse, where he had attended a press conference with YAFFED founder Naftuli Moster, when he passed Wieder, who loudly said, “I’ll tell it to your face: you’re the anti-Semite of Rockland County.” Rockland Legislator Laurie Santulli then requested a resolution condemning Wieder’s comments to Hull, as well as Wieder’s criticism of state Assemblywoman Ellen Jaffee at an Aug. 15 Ramapo Town Board public hearing, after Jaffe had opposed a proposed zone-change request for real-estate development.

The tensions continued this week Monday, when anti-Santulli flyers were anonymously left on home lawns. The flyers were placed in bags that included three rusty nails, according to a report on NBC4, and accused Santulli of using “Nazi tropes to describe Rockland’s religious Jews.” Santulli said she also received a private message of a cartoon of Adolf Hitler pointing a gun at himself, with the words, “Follow Your Leader.” Police are investigating.

Shown the flyer by NBC4’s Sarah Wallace and asked for comment, Wieder, who said he had been unaware of the flyers, told Wallace, “It’s terrible what I see here – that is certainly terrible, to anonymously make flyers and put it out on people’s lawn.”

Wieder received criticism from his opponents for these comments on on the broadcast that appeared to condone the flyers as free speech.

Day wrote on social media, “No, Legislator Wieder … it is about a crime of hate and terrorism. It is about a police investigation into an ongoing and concerted course of criminal conduct. This is not about your hurt feelings over words, nuances, dramatic music or imagery. It is about crimes under the New York State Penal Law Articles 240 and 140. Worse still is your inability to recognize civility, decorum or criminal conduct as long as it serves your purpose.”

But Wieder wrote on social media that the NBC4 report had “excessive edits of the words I spoke” and that Wallace “chose to tell a different story and conflated and distorted my response to suit her own narrative.”

In an interview with Hamodia, Wieder elaborated on what he said was a dishonest edit by NBC4.

“Wallace showed me the flyers – not mentioning anything about the nails or that someone had also sent Santulli that Hitler cartoon,” said Wieder. “I repeatedly told her I thought the flyers were terrible. Later, she asked me about Laurie Santulli condemning me for my comments for Michael Hull, and that is when I told Wallace, ‘But we’re talking about the freedom of speech, we’re talking about what makes America great.’ So she asked if that means I condone the flyers, and I told her, ‘You are putting words in my mouth.’ After the segment aired  – with that distorted edit to make it seem that my “freedom of speech” comment was referring to the flyers – I told Wallace she had edited the piece dishonestly, and asked her to release the footage of the full interview. She refused to do so, offering instead that I do another interview with her. I declined that offer, saying, ‘Fool me once, shame on you; fool me twice, shame on me.'”

NBC declined Hamodia’s request for the full interview video, but a spokesman said, “Sarah Wallace is one of the most trusted, accomplished and hardest-working investigative reporters in the Tri-State area. She is also the consummate professional, affirmed by her complete use of Mr. Wieder’s response without edits – and in its entirety. WNBC stands by Sarah and her story.”

In this charged atmosphere, the Rockland Legislature meeting Tuesday night is certain to include passionate debate, as people on both sides have rallied their supporters to attend the meeting, where public comments are allowed.

A spokesman for Day declined to comment before the meeting, but referred Hamodia to Day’s social-media page.

Asked by Hamodia what he expected to occur at the meeting, Wieder said, “We really don’t know what to expect tonight. It’s a regularly scheduled legislative meeting session, and we hope to be able to do the work that the people elected us to do.

Wieder added, “There has been a movement to come voice opposition to the Orthodox Jewish community in Rockland County, but I truly hope that message will not seep into the hearts and minds of Rocklanders.”