Business AUTO REVIEW: All Is Not What It Seems With the 2019 Mazda3
Business 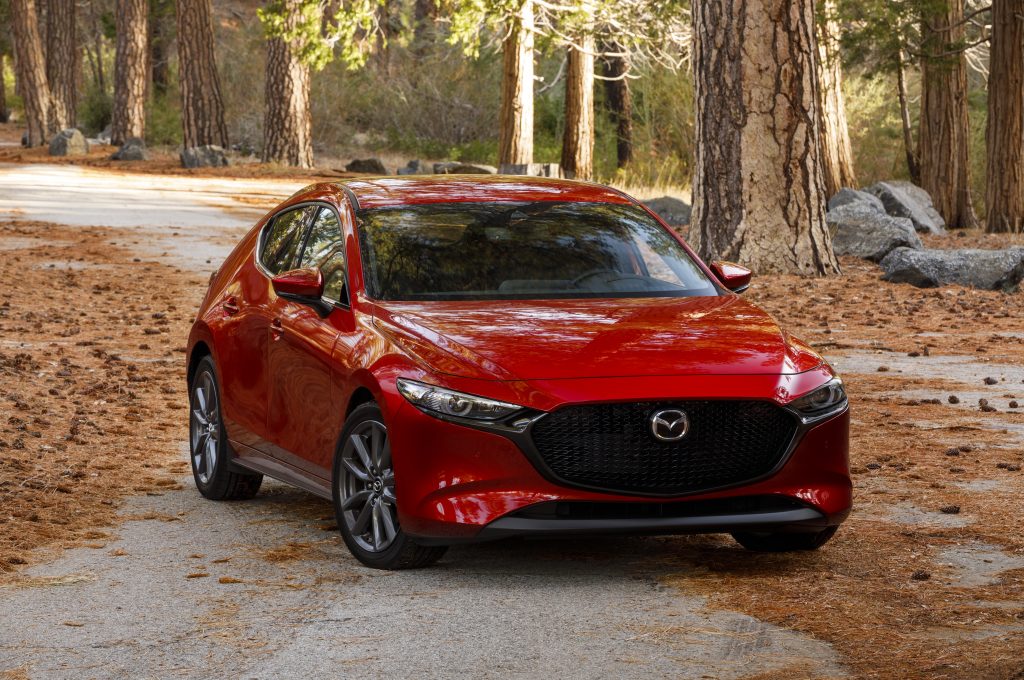 If you asked for some fruit and I handed you a cucumber, you’d probably be unhappy. While it’s technically a fruit, it’s considered a vegetable by most people.

In case you didn’t notice, many things are not always what they seem. Dresden china comes from Meissen, not Dresden. A guinea pig is not a pig from guinea; it’s a South African rodent. Turkish baths originated in Rome, not Turkey. And the redesigned 2019 Mazda3 sedan and hatchback are not luxury cars, but Mazda would like you to think that they are.

That said, you could easily mistake them for higher priced merchandise, as they exude a sophisticated, well-honed élan that expresses an attitude well above their station. It’s a refreshing change for this segment of the market, where some Asian competitors’ designs wear faces that resembles a kabuki mask. While Mazda’s sedan and hatchback boast a far more pleasing expression, each one wears dramatically different attire. Although they sport the same face, the hatchback is positioned as the more upscale model, with a price that starts $2,600 higher than the sedan, despite being 7.9 inches shorter in overall length.

To accentuate its uniqueness, the Mazda3 Hatchback is peculiarly styled behind its rear door, with a shape and angle that’s idiosyncratic, but not necessarily attractive. It could be argued that its thought-provoking form lends it an upscale personality. Certainly it does that. But whether that will drive consumers to buy it is another matter. By contrast, the sedan is far more conventional in appearance, with a flowing belt line and up-to-date looks that will shock no one. But both vehicles have a fluidity to their sheet metal that could be mistaken for something pricier, a feeling that’s certainly true once you climb inside, for its here where Mazda has spent money, and it shows.

Credit should go to its two-tone interior, where pleasing ecru accents offset the mostly black cabin. Soft touch accents abound in all the right places, including an instrument panel wrapped in a pleasing leather-like material.

As with the best new vehicles, a large color 8.8-inch screen sits atop of the instrument panel, where it’s easy to see while driving. A round controller knob flanked by shortcut buttons control it. Apple CarPlay and Android Auto are standard on the hatchback and available on higher sedan trim levels. Bluetooth is standard. A Bose premium 12-speaker audio system with aluminum speaker grilles is optional.

The new infotainment screen is a huge improvement, but the user interface takes far too many steps to accomplish something simple, like changing a radio station from one to another. And, sadly, the interior has other ergonomic issues. The cup holders are placed far forward in the center console, just under the instrument panel, which limits the height of the cup or thermos you can place in it. And while I applaud Mazda for fitting the Mazda3 with a wireless mobile phone charger, it’s located in the center bottom of the console bin. The rubber mat helps prevent your phone from sliding around, but the using the pad means moving or removing everything stored in the bin. Who thought this was a good design?

Quibbles aside, the front seats are comfortably supportive, and there’s generous head and legroom. The same can’t be said of the sedan’s rear seat, where legroom is miserly at best. There was no chance to sample the Hatchback, but one would suppose it’s better to fold down the rear seats than sit in them. If Mazda is serious about being a player in this segment, they need to provide more space than is offered here.

Underpinning this compact sedan with premium aspirations is a new architecture that speaks to this car’s true mission as affordable transportation.

The same Skyactiv-G 2.5-liter four-cylinder engine mated to a six-speed automatic or manual transmission powers all 2019 Mazda3s. Rated to deliver 186 horsepower at 6,000 rpm and 186 pound-feet of torque at 4,000 rpm, front-wheel drive is standard, although all-wheel drive is optional. Last year’s fully independent suspension has been replaced by MacPherson front struts up front and a twist beam in the rear. If this sounds somewhat less than premium, keep in mind this car’s price point, which starts at $21,000.

Nevertheless, once underway, you’ll find the Mazda3’s ride and handling lives up to its aspirations. The sedan delights the driver with a lively demeanor, feeling light on its feet, with quick steering that dials back the assist just enough to make things interesting. Bump absorption is very good, and the cabin remains quiet over all but the roughest road surfaces. Cornering behavior is about what you’d expect, with body lean coming on in extreme maneuvers. Acceleration is fairly good, but far from the overwhelming thrust that would get your blood boiling.

Aiding and abetting the driver are any number of driver-assistance aids, leather seats, seat heating and a head-up display.

Despite some decidedly old fashioned bits, such as its six-speed automatic transmission and twist beam rear axle, the Mazda3 can lull you into believing you’re driving something nicer, even though it’s not caviar on a beer budget.

But it is a very affable small car, one with far more presence than you’d expect for the price.