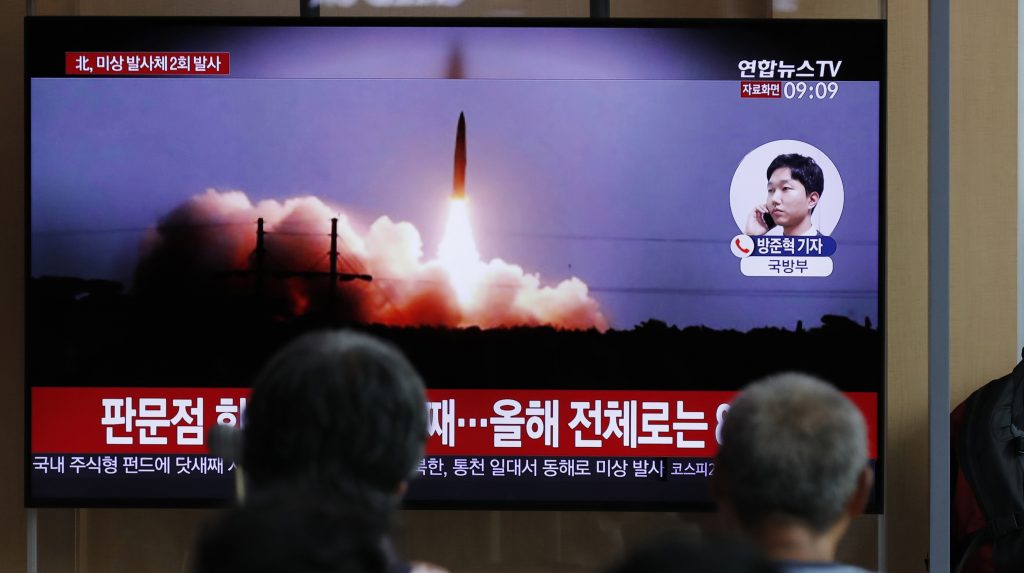 North Korea on Friday bluntly criticized South Korean President Moon Jae-in for continuing to hold military exercises with the U.S. and his rosy comments on inter-Korean diplomacy, and said Pyongyang has no current plans to talk with Seoul.

The statement by an unidentified government spokesman came hours before South Korea’s military detected two projectiles North Korea fired into the sea to extend a torrid streak of weapons display that is apparently aimed at pressuring Washington and Seoul over their joint drills and slow nuclear negotiations.

The North has ignored South Korean calls for dialogue recently and is seen as trying to dial up pressure on Seoul to coax major concessions from Washington on its behalf.

Moon, in a media speech on Thursday, said a momentum for dialogue remains alive despite the series of “worrying actions taken by North Korea recently.” He called for Pyongyang to choose “economic prosperity over its nuclear program.”

The spokesperson of the North’s Committee for the Peaceful Reunification of the Country said Moon’s comments would make a “boiled head of a cow fall into a side-splitting laughter.”

“A sure thing is that the [South] Korean chief executive is [such a] funny man as he just reads what was written by his juniors,” the statement said, while avoiding calling Moon by his name.

The statement also criticized South Korea’s recent acquisition of advanced U.S.-made fighter jets and said it would be “senseless” for Moon to believe that inter-Korean dialogue will automatically begin after the end of the ongoing U.S.-South Korean drills.

“We have nothing to [talk about] any more with [South] Korean authorities nor have any [plans] to sit with them again,” the statement said. The North had recently said it would talk only with Washington and not Seoul, and that inter-Korean dialogue won’t resume unless the South offers a “plausible excuse” on why it keeps hosting military drills with the United States.

South Korea’s Joint Chiefs of Staff said the projectiles launched from the North’s eastern coast flew about 230 kilometers (143 miles) on an apogee of 30 kilometers (18 miles) before landing in waters between the Korean Peninsula and Japan. The U.S. and South Korean militaries were analyzing the launches but didn’t immediately say whether the weapons were ballistic missiles or rocket artillery.

South Korea’s presidential office said National Security Adviser Chung Eui-yong presided over an emergency National Security Council meeting and Moon was briefed on the developments. The Blue House called for the North to stop launches that risk raising military tensions on the peninsula.

Friday’s launches were North Korea’s sixth round of tests since late July, when it stepped up its weapons demonstrations while expressing frustration over stalemated nuclear negotiations with the United States as well as the U.S.-South Korean drills that the North sees as an invasion rehearsal.

The weapons the North tested in recent weeks included a new rocket artillery system and what security analysts say are two new short-range mobile ballistic missile systems that would potentially expand its ability to strike targets throughout South Korea, including U.S. bases there.

Experts say President Donald Trump’s downplaying of the North’s launches allowed the country more room to intensify its testing activity and further modernize its short-range weaponry while it seeks to build leverage ahead of a possible resumption of negotiations, which could happen sometime after the end of the allied drills later this month.

Japan’s Defense Ministry said the North Korean projectiles did not reach the country’s territorial waters or its exclusive economic zone. The White House said it was aware of reports of the launches and was consulting with Seoul and Tokyo.