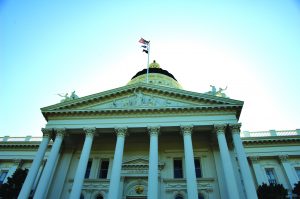 A proposed curriculum for “ethnic studies” in California’s public high schools has set off a wave of broad opposition amidst claims that it promotes anti-Semitism, virulent anti-Israel bias, and an unabashedly far-left agenda.

A law pending in the state’s legislature would require students to take a course designed to sensitize them to the experiences and challenges of various minority groups in America. In anticipation of the law’s enactment, members of California’s Department of Education were asked to design a curriculum that could facilitate those stated outcomes.

Although the bill had enjoyed wide support, the proposed syllabus garnered harsh condemnation once it was introduced.

A letter from the 16-member Jewish caucus of the state legislature summarized what it saw as the most objectionable points:

“The ESMC [Ethnic Studies Model Curriculum] is inaccurate and misleading in several critical respects and is drafted in a manner that reflects an anti-Jewish bias,” says the letter, addressed to a leading member of the Department of Education. “We cannot support a curriculum that erases the American Jewish experience, fails to discuss anti-Semitism, reinforces negative stereotypes about Jews, singles out Israel for criticism, and would institutionalize the teaching of anti-Semitic stereotypes in our public schools.”

Among the signers is Assemblyman Jose Medina, a Democrat who introduced the bill that would mandate the ethnic studies classes.

A joint letter signed by 83 Jewish and pro-Israel groups concurred with the caucus’ points and accused the curriculum’s designers of clear bias.

“Our organizations share all of the serious concerns raised by the Jewish Caucus. We are writing to you, however, because we believe these concerns highlight a much deeper and graver problem, namely, the fact that an educational curriculum can be hijacked by those pushing a political and hateful agenda.”

Dr. Irving Lebovics, Chairman of Agudath Israel of California, who also penned a letter in opposition, said that the issue of favoring a pro-Palestinian narrative of the Israeli-Palestinian conflict has been ongoing in the state educational system, but that this proposed curriculum crossed new lines.

“For a document that’s supposed to speak about ethnic minorities, it’s pretty glaring that there’s mention of every other group and type of bigotry and discrimination imaginable, but no mention of Jews or anti-Semitism,” he said. “It’s quite clear that this was written with an agenda.”

Several California-based Jewish groups mobilized to encourage people to voice their opposition to the proposal during the public comment period, which was scheduled to end on August 14. Some sources reported that in light of the strong opposition, the curriculum will be withdrawn, leaving a question as to whether a new curriculum will be submitted or if the bill requiring it might be scrapped.

The proposed curriculum provides methods of study to familiarize students with a long list of ethnic groups and common stereotypes they identify as discriminatory, yet omits Jews and anti-Semitism from this section.

What drew equal ire from many critics was the curriculum’s embrace of virulently anti-Israel movements such as BDS – which it defines as “a global social movement that currently aims to establish freedom for Palestinians living under apartheid conditions.” The curriculum’s study of social action causes comes complete with a list of figures for students to focus on, including Congressmembers Rashida Tlaib and Ilhan Omar, as well as anti-Israel activist Linda Sarsour.

The curriculum also recommends that teachers introduce students to several songs, some of whose lyrics carry virulently anti-Jewish messages.

A report by the Jewish News Syndicate (JNS) revealed that among the 18 members of the committee charged with designing the proposal are Gaye Theresa Johnson, Theresa Montano and Samia Shoman, educators with a long history of public support for anti-Israel causes and radical groups.

Anti-Israel and anti-Semitic overtones were not the only controversial aspects of the curriculum. In a section that provides recommendations to “explore the African American and African Diaspora experience,” two figures that teachers are encouraged to focus on are Assata Shakur and Mumia Abu-Jamal. Both were convicted of the murder of police officers.

In a glossary of terms, part of the definition of “capitalism” reads that “within Ethnic Studies, scholars are often very critical of the system of capitalism, as research has shown that Native people and people of color are disproportionately exploited within the system.”

Even the Los Angeles Times authored two editorial pieces against the proposal, one focusing on its anti-Semitic aspects and another calling it “jargon-filled and all-too-PC.”

“The proposed ethnic studies curriculum feels like an exercise in groupthink, designed to proselytize and inculcate more than to inform and open minds,” stated that editorial.