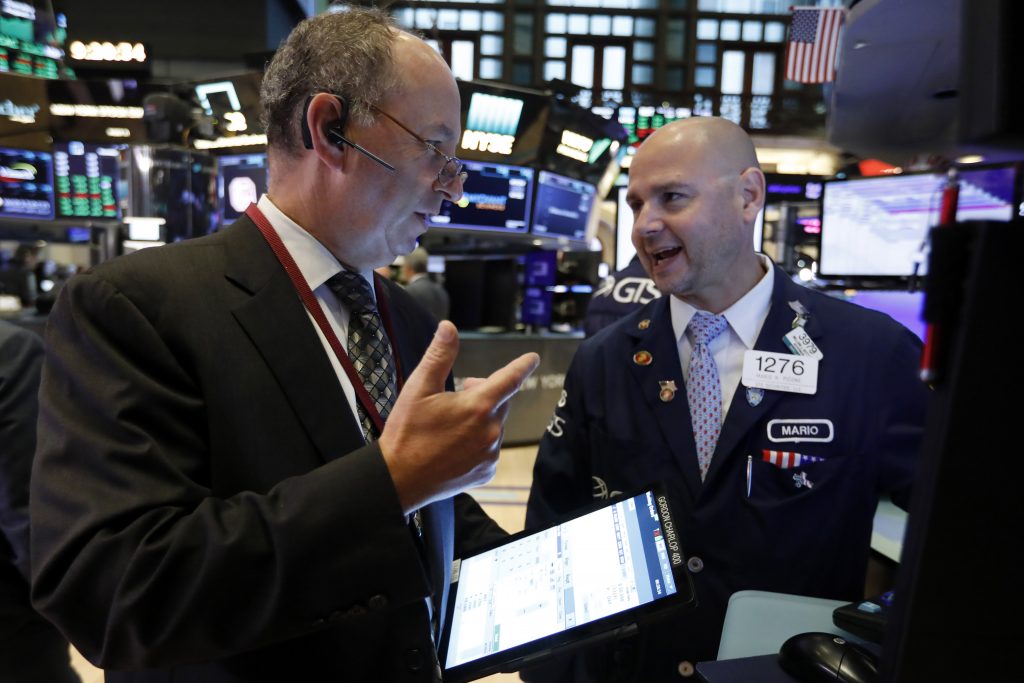 Stocks moved broadly higher on Wall Street Thursday as investors tried to shake off several days of volatile trading brought on by escalations in the U.S.-China trade war.

Investors snapped up technology stocks in a signal that they are more willing to take on risk after several days of fleeing to safer holdings, such as bonds. Microsoft rose 1.6% and Oracle rose 1.9%.

In another sign that investors were feeling more bullish, safe-play sectors like utilities and makers of consumer products like food lagged the market. Investors usually shun those sectors when they want to take on more risk.

Bond prices fell. The yield on the 10-year Treasury rose to 1.75% from 1.72% late Wednesday. The yield rose after a weekly government report on unemployment claims came in better than economists had expected.

A sharp spike in bond prices on Wednesday signaled that investors are growing increasingly nervous about the prospect of the trade dispute between the world’s two largest economies hurting the global economy.

Investors focused on a steady flow of mostly solid corporate earnings on Thursday. Companies were rewarded nicely for beating Wall Street forecasts. Albemarle rose 7.2% and Viacom rose 5%. Companies within the S&P 500 index are nearly done reporting earnings for their most recent quarter and the results have been much better than investors initially predicted.

TRADE WAR RECAP: President Donald Trump spooked the markets last week when he threatened to impose 10% tariffs on all Chinese imports that haven’t already been hit with tariffs of 25%. China retaliated on Monday and allowed its currency, the yuan, to weaken against the U.S. dollar.

China stabilized the yuan on Tuesday and that helped lift U.S. stocks following their worst day of the year. But central banks in New Zealand, India and Thailand cut key interest rates on Wednesday, sending U.S. stocks into an early dive before recovering at the end of the day. Major U.S. indexes are down about 1% for the week.

WHIPPED STOCK: Kraft plunged 14.6% after the maker of Oscar Mayer, Cool Whip and other products revealed a sharp profit plunge in the first half of the year and some hefty charges. The company has been hurting as consumers look for food that they perceive is healthier or fresher. The company had to write down the value of some of its brands and revealed an additional subpoena from the Securities and Exchange Commission as it faces scrutiny over its procurement operations.

REVENUE LYFT: Ride-hailing service Lyft jumped 4.3% after reporting a surge in second quarter profit that propelled it well past Wall Street’s second quarter financial forecasts. The company, which went public in March, reported a far narrower loss than analyst’s expected and raised its revenue forecast for the year.