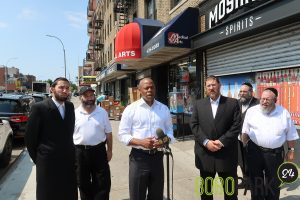 Brooklyn Borough President Eric Adams, Assemblyman Simcha Eichenstein and Community Board 12 District Barry Spitzer appeared together for a news conference on 13th Ave and 55th St, speaking on how the community is in need of a shakeup in how the Sanitation Department approaches cleanliness. 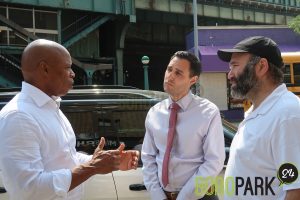 Borough President Eric Adams spoke forcefully of how complaints have been pouring into his office of garbage and filth being left behind in the wake of garbage trucks making the rounds.

Adams mentioned the rodent problem the city is facing, and how it’s crucial that the sanitation department not leave behind refuse that could feed the rodents and exacerbate the problem.

“We need a “broken window” approach to cleaning our city, and right now we don’t have that . . there’s clearly a gap in how we communicate to keep this city clean,” he said.

Adams encouraged city residents to take photos of areas with issues, and send them to his office, to 311, [and] to the Department of Sanitation.

“Something is broken in our current system that we need to correct, and that is why we’re doing these tours, to make sure we can get it right, and we can live in a clean city,” he concluded.

Assemblyman Simcha Eichenstein spoke next, reiterating the message about the sanitation problems the neighborhood is dealing with which is why this event was arranged.

Eichenstein did stress that he commends the Sanitation Department for being accommodating in instances when he and constituents share video evidence of a problem, and he encouraged others to follow this track. He concluded by thanking Adams for coming out to see the streets firsthand.

District Manager Barry Spitzer echoed these remarks, thanking Adams for visiting in person, and describing shortcomings in how sanitation workers are currently approaching garbage collection, such as leaving a maze of overturned garbage cans on the street, or missing pickups.

He concluded with a call to both educate residents on the proper way to dispose of garbage and leave it out, and to help improve how the sanitation department does its part.

Adams then added some final remarks, stressing what the approach of the sanitation workers must be: “It is consciously observing – what is it going to take to make sure that this block is cleaner than when I arrived,” or else the ‘Department of Sanitation’ isn’t worthy of the name.

Following their public statements, Borough President Eric Adams and the others set out on a tour of 13th Ave and other locations to witness matters for themselves.