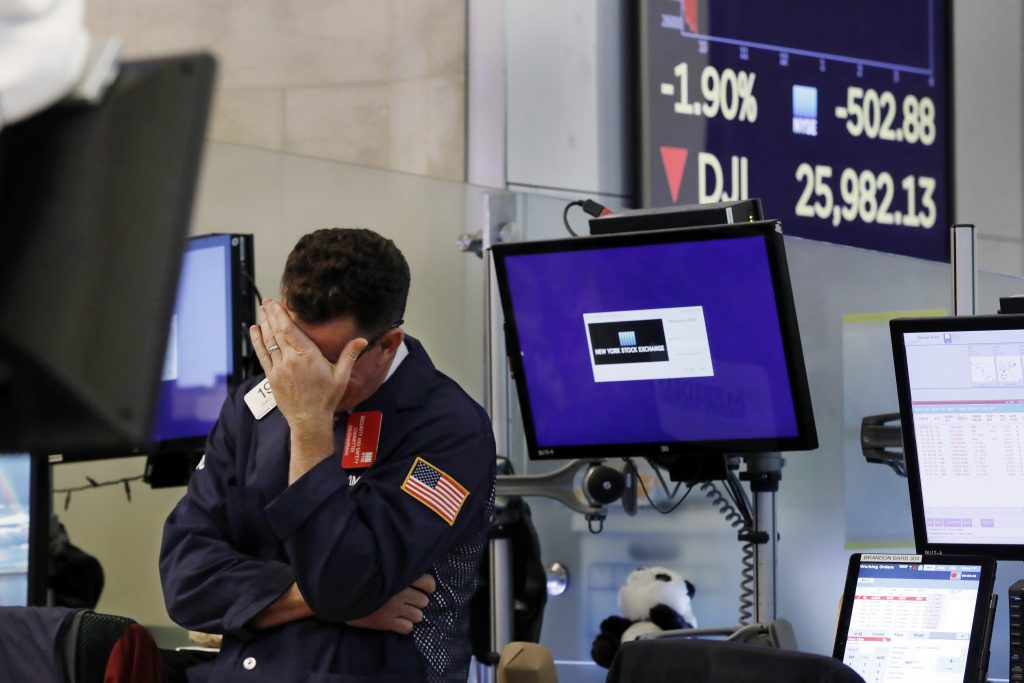 Stocks tanked again Monday on worries about how much President Donald Trump’s worsening trade war will damage the economy, and the S&P 500 was headed for its worst drop since late last year, when the market was wrapped in the throes of recession fears.

China let its currency, the yuan, drop to its lowest level against the dollar in more than a decade, a move that President Trump railed against as “currency manipulation.” It followed his own tweets last week that threatened tariffs on about $300 billion of Chinese goods, which would extend tariffs across almost all Chinese imports.

The escalations in the trade war between the world’s largest economies are rattling investors already unnerved about a slowing global economy, falling U.S. corporate profits and possibly too weak inflation.

“The Great China Trade Deal evaporated before our eyes last week and investors should stop hoping it back into existence,” Christopher Smart, head of the Barings Investments Institute, wrote in a report.

Losses were steep and worldwide as the sell-off that began Monday in Asia swept westward through Europe to the Americas. Investors in search of safety herded into U.S. government bonds, which sent yields plunging lower.

The yield on the 10-year Treasury note, which rises with expectations of stronger economic growth and inflation, fell to its lowest level since Trump’s 2016 election energized markets, down to 1.73% from 1.85% late Friday.

The S&P 500 lost 2.8% as of 2 p.m. Eastern time, and was on track for its worst day since December, when markets tumbled on worries that the economy was headed for a recession because of the trade war and a Federal Reserve that had raised interest rates too quickly. The Dow Jones Industrial Average fell 744 points, or 2.8%, to 25,740, and the Nasdaq composite dropped 3.4%.

Of course, the U.S. economy is still growing, the unemployment rate remains close to its healthiest level in nearly half a century and U.S. stock indexes set record highs just over a week ago. But the escalating trade tensions and disappointment that the Federal Reserve has not committed to a lengthy series of interest-rate cuts have sent the S&P 500 on a losing streak set to hit its sixth day, which would be its longest since October. The S&P 500 is 5.8% below its record.

“A recession is still unlikely, but the probability of it is higher, still at less than 20%,” said Nate Thooft, head of global asset allocation at Manulife Investment Management. The biggest threat coming out of the past week, he said, is that all the uncertainty about trade will scare CEOs and shoppers away from spending. That would threaten the expected ramp-up in growth that economists have been expecting for later this year.

A weaker yuan gives Chinese manufacturers a boost by making their products cheaper on worldwide markets for buyers using dollars or other currencies. That hurts U.S. manufacturers, which have already been hit by the slowing global economy. It also adds more downward pressure on inflation, which some economists worry may be edging toward too weak. In the worst case, falling prices encourage people and companies to hold off on buying things, which starts a vicious cycle of less and less economic activity.

The U.S. has long complained about the weakness of China’s currency, and Monday’s drop brought the yuan past a level that traders saw as an important psychological benchmark, at seven per $1. Analysts were mixed, though, on whether the move was a result of China weaponizing the yuan or merely a reflection of its own slowing economy and the painful effects of tariffs.

In Asia, where tensions between Seoul and Tokyo are worsening in a trade dispute entirely separate from Washington’s and Beijing’s, Japan’s Nikkei 225 index fell 1.7%, and South Korea’s Kospi lost 2.6%. The Hang Seng in Hong Kong dropped 2.9%.