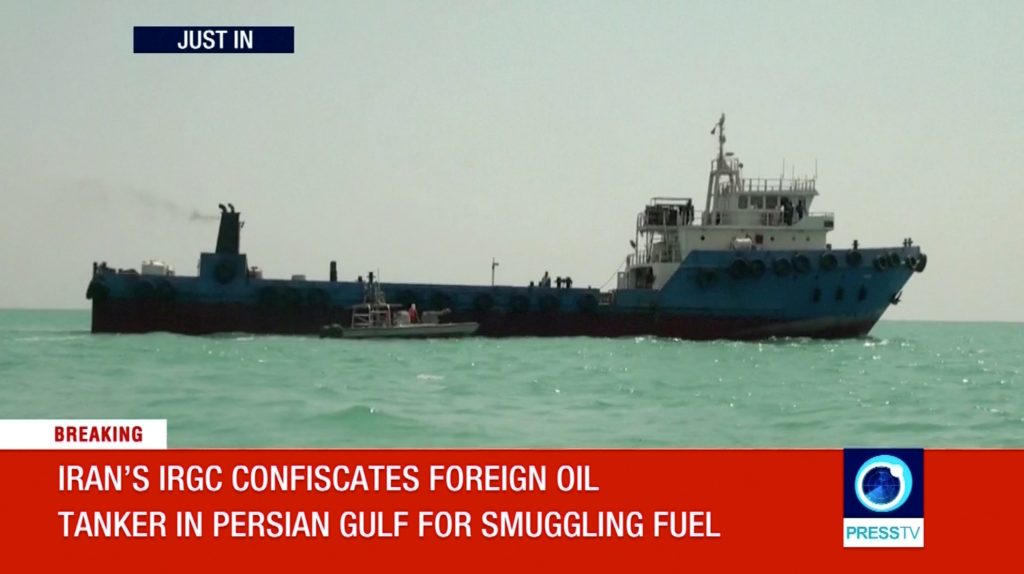 Iranian forces seized a ship in the Persian Gulf suspected of carrying smuggled fuel, state media reported Sunday, marking the Revolutionary Guard’s third seizure of a vessel in recent weeks and the latest show of strength by the paramilitary force amid a spike in regional tensions.

State TV and the semi-official Fars news agency reported that seven crew members were detained when the ship was seized late Wednesday carrying 185,000 gallons of “smuggled fuel” from Iran. The local reports did not provide further details on the vessel or the nationality of the crew.

The news agency reported the ship was seized near Farsi Island, where a Revolutionary Guard naval base is located. The island sits in the Persian Gulf between Saudi Arabia and Iran, north of the Strait of Hormuz.

Guard commander Gen. Ramazan Zirahi was quoted by Iran’s state TV as saying the ship was seized in Iranian territorial waters and had been transporting diesel fuel. State TV and other local media also ran footage of the ship, but did not show any flag or identifying marker for the vessel.

“This foreign vessel had received the fuel from other ships and was transferring it to Persian Gulf Arab states,” Zirahi said in comments carried by Fars new agency.

It was not immediately clear why a ship carrying Iranian fuel would transfer its cargo to energy exporting Gulf states, but smuggling has been a source of concern in Iran. Iranian media reported last month that some 8 million liters of government-subsidized Iranian fuel are smuggled daily to other countries where prices are much higher.

The new claims would make this the third vessel seized by the Guard in the past two weeks, and the second accused of smuggling fuel.

The U.S. Fifth Fleet, based in Bahrain, said it did not have information to confirm the reports. Maritime tracking experts also said they did not have any immediate information about the incident or details on the vessel.

Maritime intelligence firm Dryad Global said that, if confirmed, this is likely to be “another relatively low key interception designed to signal to the West that Iran maintains the capability and intent to exercise its influence” in the Persian Gulf.

Tensions in the Persian Gulf have escalated recently, with the United States boosting its military presence in the region and six oil tankers targeted in the Gulf of Oman in unclaimed acts of sabotage that the U.S. blames on Iran. Iran has denied any involvement in those attacks.

The current tensions stem from President Trump’s decision last year to withdraw the U.S. from Iran’s 2015 nuclear accord with world powers and impose sweeping sanctions on the country that have crippled its economy. In response, Iran began openly breaching limits set by the nuclear agreement to pressure European signatories to provide economic relief to help offset the sanctions.

Maritime security around the Persian Gulf is of international importance. The Strait of Hormuz sits at the mouth of the Persian Gulf, a shipping channel for one-fifth of all global crude exports. Petroleum products from Saudi Arabia, Qatar, Kuwait, the United Arab Emirates, and Bahrain are exported through the strait to countries around the world. Iran also uses the strait for its exports.

Some 67,533 ships sailed through the strait last year, according to data from maritime publication Lloyd’s List sourcing research by Russell Group.

Ranjith Raja, a senior analyst at data firm Refinitiv, said this latest seized ship by Iran could be a barge or supply vessel rather than a commercial merchant tanker based on the amount of fuel it was allegedly transporting. Due to the numerous supply vessels operating in the area, it was not possible to pinpoint which ship had been seized, he said.