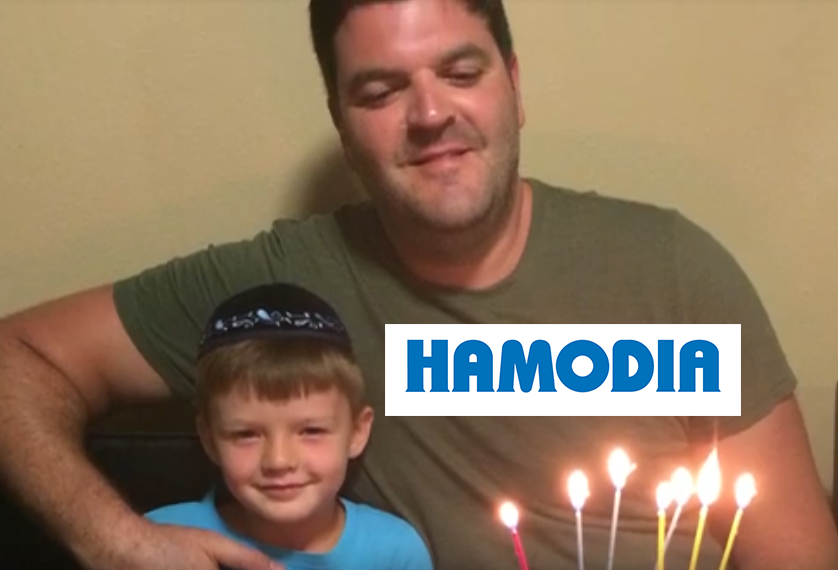 President Donald Trump on Monday commuted the sentence of Boaz (Ronen) Nahmani, husband to a cancer-stricken wife and father of five young children, who in 2015 was given a maximum 20-year term for conspiracy to possess with intent to distribute synthetic marijuana, a sentence decried by many legal experts as wildly disproportionate.

Nahmani was the first person ever convicted in South Florida of a synthetic marijuana case. His attorneys, and an expert chemist they hired, have argued that the prosecution’s case was based on a false assessment of the volume of the drug Nahmani had imported, and that in any event, the 240-month, maximum sentence was extreme.

Nahmani, 45, has five children, the oldest of whom is 13, and a wife, Szylvia, suffering from Stage 4 cancer.

“I’m still trying to catch my breath because I’m so overwhelmed, I can’t believe what happened and I’m so grateful,” Mrs. Nahmani told Hamodia shortly after receiving word of the commutation. “I don’t even have words in the dictionary to describe how grateful I am, how blessed I feel and how overwhelmed I am with the joy in my heart.”

Mrs. Nahmani had just stepped out of a cancer-treatment session Monday morning, when she received a phone call from her husband’s attorney, Gary Apfel, informing her that the president had signed the commutation.

“I couldn’t contain myself, I was screaming so loud,” Mrs. Nahmani said. “All the people outside said, ‘Are you okay?’ I said, ‘Thank you, I am perfectly fine, I’m just so happy.’”

Apfel told Hamodia that in addition to the severity of the sentence, he and others were motivated to free Nahmani so that the husband and father could return to his suffering family.

“Chasdei Hashem, we are living in an age when we see open miracles,” Apfel told Hamodia. “We are so grateful to President Trump for his great compassion in granting clemency to Boaz and relief to his wife and children. In reuniting this family under these tragic circumstances, the President has performed a true act of chessed, loving-kindness, which every Jew should appreciate and applaud.”

Apfel, lead attorney for Shalom Mordechai Rubashkin – the first person to have a sentence commuted by Trump – worked on this case with many of the same players as the Rubashkin case, including legal scholar Alan Dershowitz.

“This is a real case of pikuach nefesh, because there are children here whose mother is seriously ill with cancer and whose father would have been in prison, and in the event the mother were to have passed, would have been all alone,” Dershowitz told Hamodia. “So what President Trump did was the right thing; he ought to be praised for saving lives and doing a mitzvah. This was a team effort involving lots of people, including Gary and many others who acted selflessly to bring about this pidyon shivuyim. And I think it will be an important part of President Trump’s legacy that he did the right thing for the right reasons.”

Feuer, a frum neurologist from Englewood, N.J., who is close with Rep. Meadows and his wife, Debbie, and first brought to the case to their attention two years ago, told Hamodia that Rep. and Debbie Meadows “worked tirelessly on behalf of the Nahmanis despite their never having met them. They interacted with every government official that was somehow involved in this case. The congressman has demonstrated what a firm believer he is in true justice and compassion.”

Rabbi Moshe Margaretten, director of the Tzedek Association, which advocates for prisoners and prison reform, told Hamodia, “It is a glorious day for a democratic society when someone given such a grossly unjust sentence is set free. We thank Hashem for his chassadim, and we thank President Trump for his sense of fairness.”

“This case presents the worst kind of disproportionate sentence for a first-time nonviolent drug offense meted out against a very pious and devoted father of five and husband to an extremely ill wife who desperately needs his return,” wrote the legal officials. “It is an especially compelling case for the use of the President’s executive clemency power. We implore you to correct this injustice and reunite this family.”

In a video message sent by the Nahmani family to Trump pleading for clemency, Boaz’s daughter Daniella said, “If my dad was home right now, I would just hug him so much, I would be crying from happiness for days.”

“If he walked in the door right now,” said a son, Orel, “I would hug him and I would never let go.”

Orel shares a birthday, 14 Av, with his father. “It was always Orel’s dream that he would share this birthday party with his father,” Mrs Nahmani told Hamodia Monday. “And now that will happen!”

“Everybody is crying; they can’t believe it,” she said. “The children are screaming ‘Abba is coming home! Chasdei Hashem! You see Mommy, G-d answers all the tefillot.’ I think they are still in shock. I am in shock.”

“Just the same way I believed with emunah sheleima that this would happen, I believe Hashem is also crying from joy in Shamayim seeing how Am Yisrael got together to help each other, like brothers. Help came from places I never imagined and people that I never met. And today I got phone calls from people I never met, billionaires, politicians.”

Among those who called were Rep. and Debbie Meadows, whom Mrs. Nahmani described as “such amazing people.”

“And President Trump, I have no words to ever describe how grateful we are to him that he made this happen. I always knew, even before he became president, that he does a lot of chessed. We just are forever and ever thankful to him, and to all of Am Yisrael, who came together from all over the world.

“There are people we never met, who accepted mitzvot – like to cover their hair, light candles earlier Friday, to eat kosher, to give tzedakah – as a zechut.”

Mrs. Nahmani had just gotten off the phone with her husband.

“He called me and his voice was shaking,” she said. “He was in shock, too.”