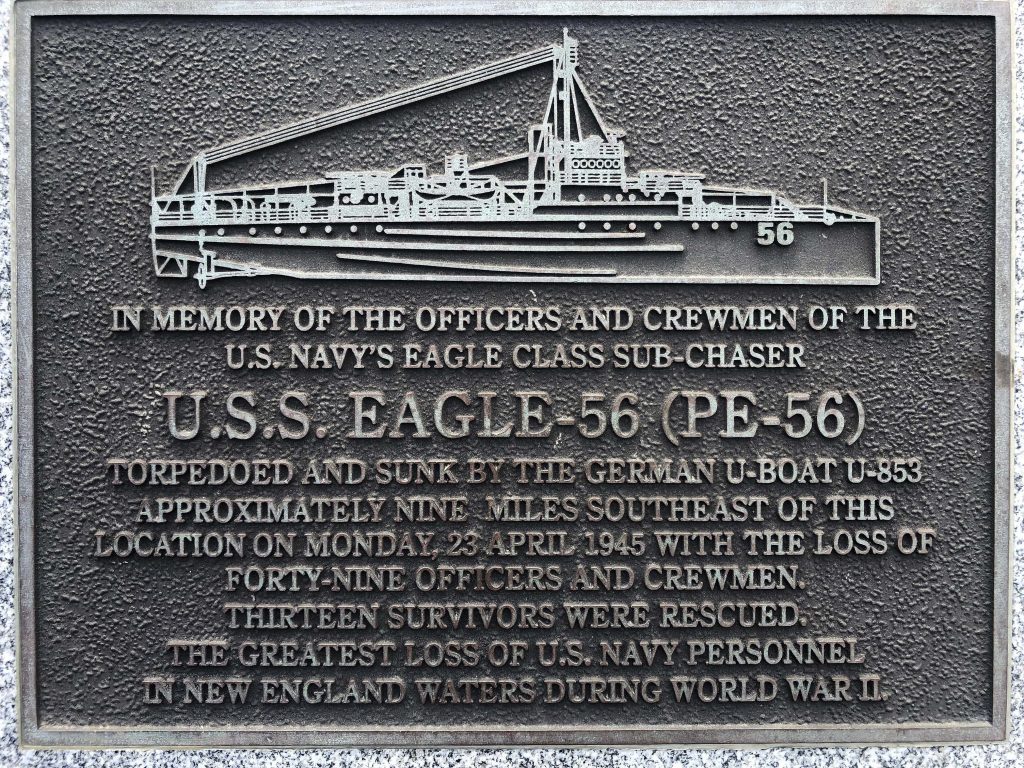 A private dive team has located the last U.S. Navy warship to be sunk by a German submarine in World War II, just a few miles off the coast of Maine.

The sinking of the USS Eagle PE-56 on April 23, 1945, was originally blamed on a boiler explosion. But the Navy determined in 2001 that it had been sunk by a German submarine.

The patrol boat’s precise location remained a mystery — until now.

Garry Kozak, a specialist in undersea searches, announced this week that diver Ryan King, of Brentwood, New Hampshire, confirmed in June 2018 that an object Kozak previously discovered on sonar is the vessel 300 feet down.

King’s team, which later began working with the Smithsonian Channel, extensively explored the ship on the ocean floor, 5 miles off Cape Elizabeth, Maine.

“With the deck guns, there was no mistaking it for what it was,” said Paul Lawton, a Massachusetts attorney whose research helped to convince the Navy how the ship was sunk.

The patrol boat was equipped with depth charges, explosives used to battle enemy submarines. But it was towing a practice target for bombers from a nearby Brunswick Naval Air Station when it sank. Only 13 of the 62 crew members survived; they were plucked from the water by a nearby Navy destroyer.

The underwater video, which will be aired in the fall, backs up the story of sailors who said an explosion broke the ship into two pieces, said Kozak, of Derry, New Hampshire.

The two hull segments, about 350 feet apart, blended with the uneven, craggy ocean floor, making it difficult to locate them with sonar, Kozak said. Underwater video clearly shows the deck gun on the bow; farther away, depth charges are clearly visible on the stern, Kozak.

The divers’ research is expected to offer definitive proof that the sub was indeed destroyed by a German submarine, which itself was sunk days later off Block Island, Rhode Island, Kozak said. The video shows the ship’s boilers are intact, he said.

The Eagle’s sinking was once a mystery.

The World War I-era patrol boat was ripped by a blast, and several survivors reported seeing a submarine conning tower featuring a painted red horse on a yellow shield.

The sinking was ruled a boiler explosion at the time, but Lawton helped connect the dots to show it was sunk by a German submarine with the same markings.

The day before Germany signed a surrender on May 7, 1945, U.S. Navy destroyers sank the submarine, U-853, south of New London, Connecticut, after it attacked a cargo ship.

The submarine is a popular attraction for divers because it’s accessible in 130 feet of water.

But the Eagle sits 300 feet down, far beyond the reach of recreational divers.

The Navy is convinced that the vessel located by the divers is the Eagle and is appreciative of dive team’s respectful research of the site, said Robert Neyland, who leads the underwater archaeology branch of the Naval History and Heritage Command.

Both sunken vessels are considered war graves, and federal law prevents divers from tampering with them. The remains of one of the German sailors were retrieved by a diver in 1960, sparking outrage; the sailor was buried with military honors in Newport, Rhode Island.