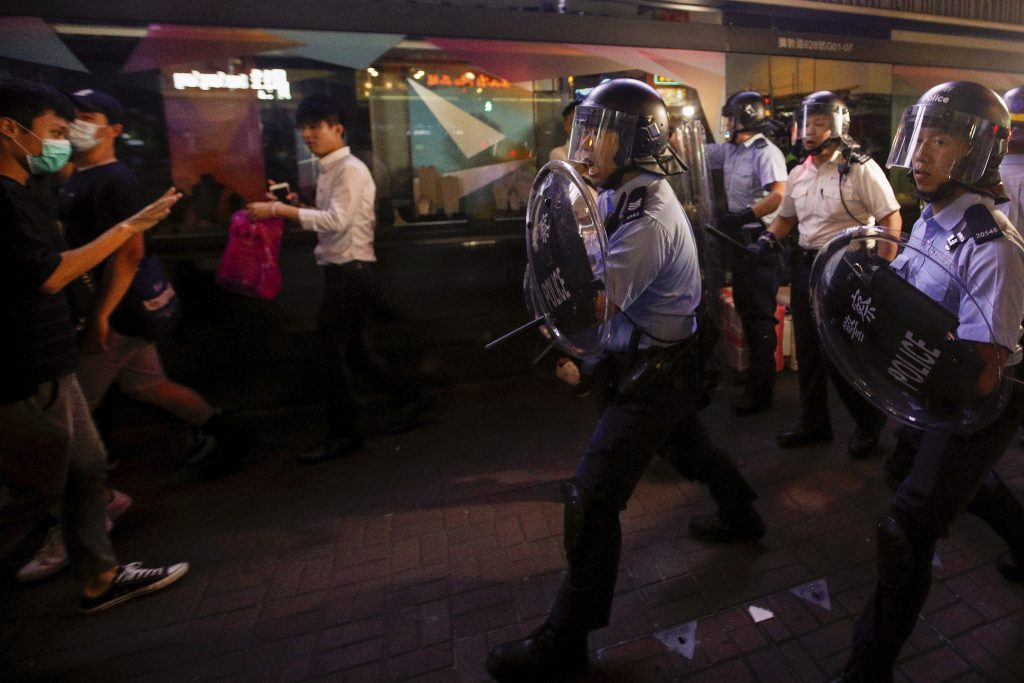 Beijing might have dreamed of a scene like this: a crowd of jubilant Hong Kong youths shouting the Chinese national anthem at the top of their lungs.

But the vocalists were seeking to make a political point to tourists from mainland China, who paused, bewildered, as they came down escalators of a shopping mall to see a crowd of thousands singing their anthem while raising signs that said: “Withdraw the Evil Law,” “Hong Kong Democracy,” and “No Rioters, Only Tyranny.”

After a month of mass protests near government buildings and financial centers on one side of Hong Kong, pro-democracy activists moved en masse Sunday to the other side of the city, Kowloon — where mainland Chinese tourists roam.

The protesters were determined to keep the march peaceful, days after several hundred mostly young protesters had broken into the legislative building last week, drawing condemnation from the Hong Kong and Beijing governments.

Clashes broke out hours after the march ended Sunday, as police charged at several hundred protesters who remained on the streets of Kowloon. At least three were arrested.

But during the day, while some protesters swore at police as they passed by, the march was generally peaceful, even festive.

After spending days on online forums discussing how best to reach out to mainlanders, the activists airdropped memes and fliers in simplified Chinese to strangers at the metro station. Some included QR codes formatted for ubiquitous apps used in mainland China for chatting and online payment. Once scanned, they opened to explanations of the anti-extradition bill movement.

Hong Kong protesters have mobilized around an extradition bill that would have allowed suspected criminals to be deported to mainland China, which many Hong Kongers see as a threat to the freedom of speech and rule of law that Hong Kong currently has.

But the messaging of Sunday’s march expanded far beyond the extradition law, touching on multiple issues censored in mainland China.

Protesters raised signs with pictures of Chinese human rights lawyers, Marxist students, feminists and social workers who have been arrested or disappeared into secret detention in recent months.

“No Xinjiang camps, no Hong Kong camps,” read a protest sign in reference to internment camps where an estimated million Uighur minority Muslims are being held for “re-education.”

On the street, volunteers passed out fliers and sent more airdropped messages about the Tiananmen Square killings of 1989, the contaminated milk crisis of 2008, and ongoing environmental protests that have met with a heavy police crackdown in the mainland Chinese city of Wuhan.

“Today Wuhan, tomorrow Hong Kong!” chanted a group of protesters in Mandarin as they marched, handing out information fliers with packets of candy attached as mainland tourists passed.

“What happened in Wuhan?” said one tourist, a 27-year-old Wuhan native who stood outside a hotel with her aluminum suitcase, watching the march go by. She gave only her last name, Xu, for fear of repercussions back in China for speaking to foreign media.

Xu said she had traveled many times to Hong Kong in the past as well as to Taiwan and outside China. She’d used a VPN at home to read recent posts about Hong Kong on social media, but had mostly viewed ones that said the protesters were violent, and probably taking money from foreign forces to go on the streets.

She didn’t understand why so many Hong Kongers, especially young people, cared so much about the extradition bill.

“I thought it was only for criminals,” she said. “But I believe 99% of these people marching are not criminals. They seem to be good people. Why do they care?”

Xu, who said she was a professional athlete, said she didn’t think that China had a problem with freedom of speech, or that people critical of the government would automatically be arrested.

“If they really arrested anyone who criticizes the government in China, how many would they have to catch?” she said, adding that China is in a “peaceful era” because of its strong economy and rising place on the global stage.

But Xu said she wanted to know what was happening in Wuhan. Her parents remained there now. She accepted several fliers from protesters who thanked her, nodding and smiling.

Mandarin has been a source of tension in Hong Kong in recent years, sparking “speak Cantonese” movements as Hong Kongers resist the mainland Chinese dialect.

But on Sunday, activists corrected one another’s Mandarin pronunciation. They hollered, “Welcome! Welcome!” to tourists, waving slogans in simplified Chinese.

One protester waved a red sign with Mao Tse-tung’s face, printed with a quote from the chairman: “Revolution is no crime, to rebel is justified.”

She then waved tourists toward the march, chanting in Mandarin, “Patriotism! Patriotism!” and “Shopping! Shopping!”

Many of the tourists were confused. Three mainlanders, women in their 20s from Shenzhen who refused to give their names, approached a Times journalist to ask what was happening.

They hadn’t heard anything about the extradition bill until now, they said, though they lived just across the border and came often to shop.

Another young couple from Shenzhen paused near a Hong Kong protester, shopping bags still in hand, and listened as he spoke in Mandarin through a megaphone: “Why are so many Hong Kongers still out marching? Because the Hong Kong government is not listening to our demands. We want to fully withdraw the extradition bill, but they haven’t done that.”

“Do you think they’ll really withdraw the bill?” the woman asked her partner.

She knew vaguely that the protests were about an unwanted law, she told The Times, before her partner interrupted. “We don’t know what this is about,” he said, pulling her away.