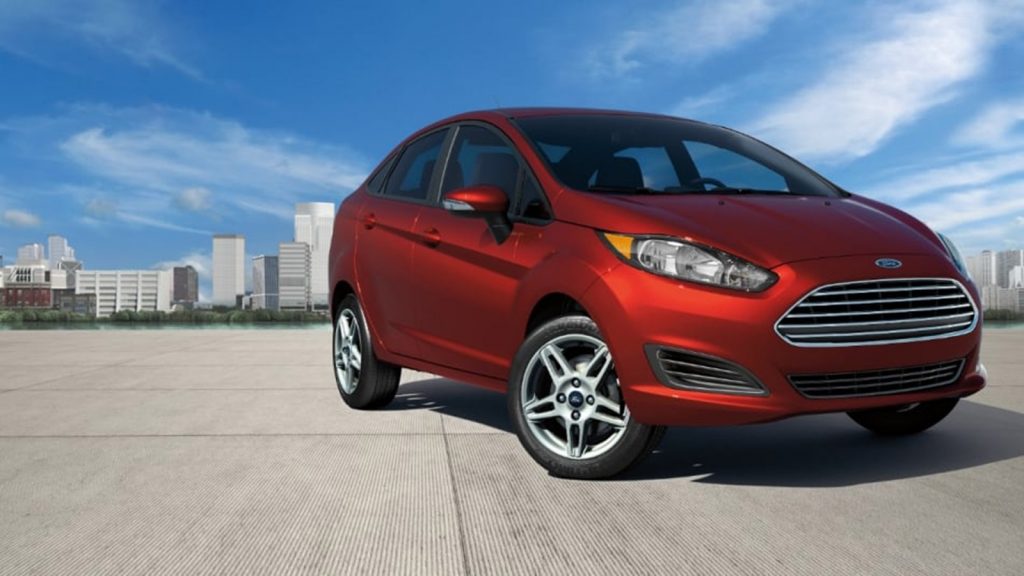 Neither price necessarily reflects what a new buyer might pay after accounting for options and extras, but even the top trim Fiesta ST, starting at $21,340, is a fraction of the Escalade’s sticker.

It’s not surprising the Cadillac costs so much more. It’s a luxury SUV after all — 12-way power adjustable front seats! — and isn’t meant to compete with the Fiesta in any direct way.

What’s telling, however, is that the Fiesta is one of the casualties of the shift by automakers and consumers away from passenger cars. It’s being eliminated from Ford’s North American lineup (along with most of the Dearborn automaker’s cars), and with it, another option for entry-level buyers.

There’s a simple reason. Automakers love to sell larger and more luxurious vehicles because they can make more money on them, and U.S. consumers have been largely accommodating.

The question is, are entry-level buyers being left behind, and if so, what does that mean for the market?

It’s not that consumers have no choices for less-expensive vehicles – Kelley Blue Book lists the 2019 Honda Fit, Hyundai Accent and Chevrolet Spark as the year’s most affordable. But the number of possibilities is shrinking. Small cars are not always less expensive than larger vehicles, but they dominate the affordability list.

“In terms of affordability, there’s just so many less options for people who are in this space,” Acevedo said. “When you look at the industry when it emerged from the recession, definitely small cars were the priority, and it was foundational to the business model. … We’ve seen that dry up.”

And the numbers are slated to drop even further.

Consumers shopping for a less expensive new vehicle might turn to a subcompact SUV, such as the Nissan Kicks or Jeep Renegade, but it could be thousands of dollars more than a subcompact car, such as a Spark or Kia Rio.

It’s understandable that some automakers have shifted away from cars. The Chevy Cruze and Ford Focus, for instance, were not profitable at the volumes at which they were selling, Acevedo said.

As the shift to SUVs has happened, transaction prices have been increasing on many vehicles, according to Sam Abuelsamid, an analyst for Navigant Research.

“With the shift of [a lot of] manufacturers away from cars to SUVs and trucks, that’s likely to increase,” Abuelsamid said, noting that with fewer cars available at lower prices, “it’s probably going to be even more of a challenge going forward.”

Those price increases have played out over a number of years.

Such increases are likely to have an effect on consumer behavior in coming years.

“In the next two or three years, we’ll probably start to see a shift away from higher prices. A lot of consumers will start to see a limit in what they can afford,” Abuelsamid said.

Who sticks with cars?

While domestic automakers have abandoned many of their car lines, some others have not.

“The major Japanese automakers are kind of keeping their portfolios intact, really leaning on their cars to do their fair share of sales for the company,” Acevedo said, noting that their passenger car sales volumes are likely to benefit from the Detroit Three’s moves away from cars.

Buyers looking for cars are not going to disappear, Acevedo said.

It’s not the first time Detroit has shifted its focus squarely to larger vehicles, but many industry experts insist this time is different from previous decades when that focus preceded the financial crisis and a Motor City reckoning.

It’s hard not to note some parallels with the past, however, as highlighted by Micheline Maynard’s 2003 book, “The End of Detroit; How the Big Three Lost their Grip on the American Car Market.”

“GM, Ford and Chrysler shifted en masse in the early- to mid-1990s to focus most of their attention on pickups, SUVs and minivans. As a result, they ignored the car market, claiming that trucks were where consumers’ tastes had shifted,” according to one passage.

Later, she described missed warnings that consumers were likely to “turn away” from SUVs.

There are clearly differences today.

Foreign automakers themselves are more heavily reliant on SUV sales in the U.S. now than in the past. Many experts also do not believe gas prices will become a key factor even if oil prices spike, in part because once the price of oil goes up, higher-cost methods of production, such as fracking, make even more financial sense, meaning new supplies would become available.

Still, tensions are high again in the Middle East, with the U.S. and Iran facing off, and all bets are off if an armed conflict were to break out.

Are things that different now?

Acevedo acknowledged the echoes of the past but noted that SUVs, especially smaller versions, are not necessarily the gas guzzlers they once were, and much of this SUV boom is demand-driven.

Matthew Anderson, curator of transportation at The Henry Ford, has a unique window on automotive history, and he isn’t dismissing past lessons.

“I never try to predict the future, but it seems inevitable to me that gas prices will climb again at some point and small cars will return, though we’ve got some real wild cards in the form of electric vehicles, [autonomous vehicle] technology and booming domestic oil production,” Anderson said, noting that he believes affordability is a problem in the industry.

Anderson recounted a discussion at a conference he attended two months ago where the topic of “kids don’t care about cars these days” came up.

“We had a few millennials and Gen Z attendees in the crowd and they were adamant that young people do indeed still like cars, but they can’t afford them. It’s not just that car prices have gone up, it’s that young people are paying for so much else — bigger college loans, steeper rent and house payments, data plans — with wages that haven’t climbed to keep up with expenses,” Anderson said in an email.

Of course, consumers do have options other than buying a new car. Used cars are one possibility, although data show that consumers are financing more to get into a used car, which could have implications if even more people turn to the used market. In May, the average financed for a used car was $22,191, compared with $21,689 a year prior, according to Edmunds, noting that monthly payments for used cars in May were also hitting $412 on average.

Another option, aside from public transportation, which can be much more cost-effective in many cities, is leasing.

Paul Richards, owner of Brighton Honda, said leasing is a popular option in Michigan because lower payments, a couple of hundred dollars a month for instance, are possible. The option is good as long as someone isn’t likely to go over his or her mileage limits.

“For a good chunk of the market, it’s just affordability — ‘I just want to have the most car for the lowest payment,’” Richards said. “It’s a good way to drive a little more car and allows you to change cars” after a few years.

Richards said he’s watched as new vehicle prices have climbed over the years.

“I think we’re all feeling competitive pressure toward the affordability side,” Richards said, noting that the expense of owning a car doesn’t stop with the payment, but also includes the price of fuel, insurance and potential repairs. “Everybody wants to lower their payments as much as they can.”