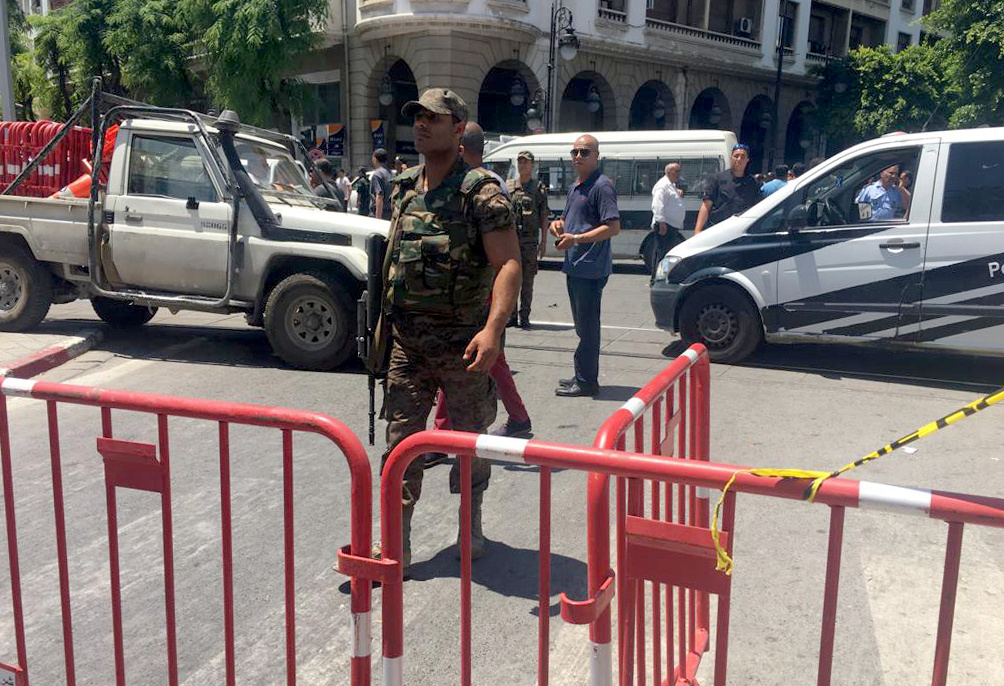 Two suicide bombers blew themselves up in separate attacks on police in the Tunisian capital on Thursday, killing one police officer and wounding several other people, the government said.

It was not immediately known who was behind the attacks, which come months before an election and at the peak of a tourist season in which Tunisia is hoping for a record number of visitors.

The first attack targeted a police patrol in Charles de Gaulle Street in central Tunis. One police officer was killed and at least one other, as well as three civilians, were wounded, the Interior Ministry said.

Shortly afterward, a second suicide bomber blew himself up near a police station in al-Gorjani district. Four people were wounded, the Interior Ministry said.

Heavily armed police cordoned off the locations of the attacks, one of which was about 200 meters away from the French Embassy.

Interior Ministry spokesman Sofian Zaak said the terrorists had not yet been identified, and he called on the public to show strength and not panic.

Tunisia has been battling terror groups operating in remote areas near the border with Algeria since an uprising overthrew autocratic leader Zine Abidine Ben Ali in 2011. High unemployment has also stoked unrest in recent years.

Last October a woman blew herself up in the center of the capital Tunis, wounding 15 people including 10 police officers in an explosion that broke a long period of calm after dozens had died in terror attacks in 2015.

Security has improved since authorities imposed a state of emergency in November 2015 after those attacks – one at a museum in Tunis and another on a beach in Sousse. A third attack targeted presidential guards in the capital. Islamic State claimed responsibility.

The attacks scared off holidaymakers and investors, worsening the country’s economic problems.