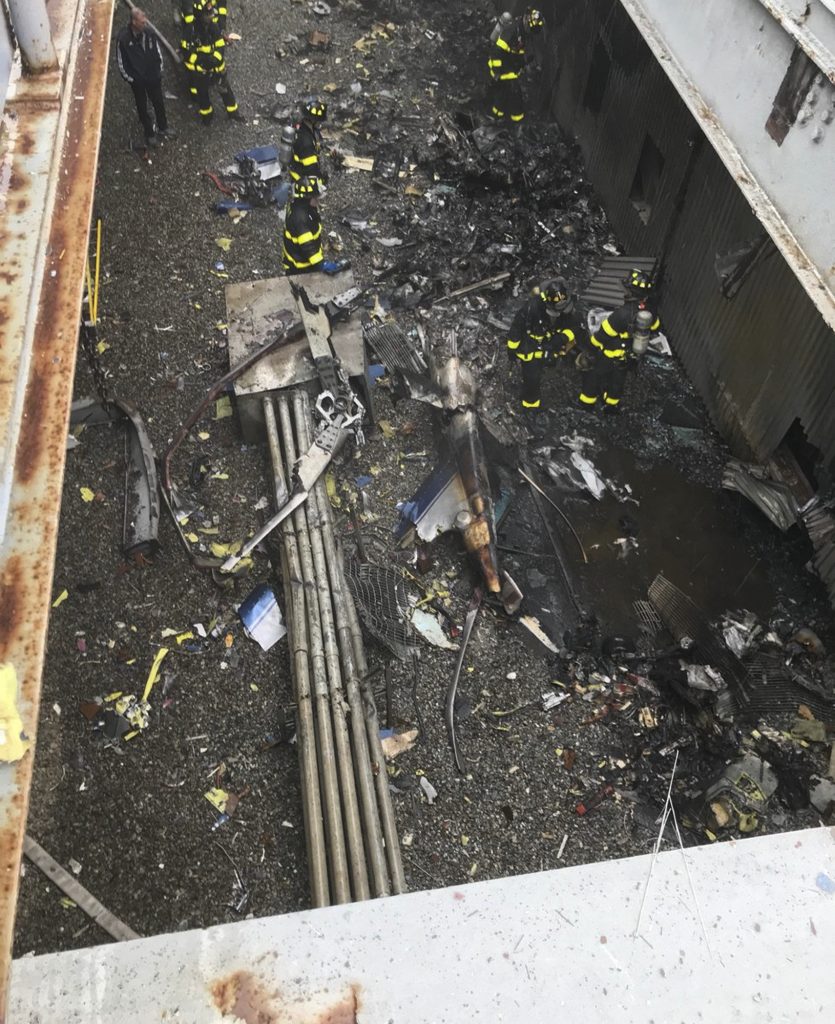 The pilot killed this month when his helicopter hit the roof of a New York City skyscraper in rain and fog said before lifting off from a Manhattan heliport that radar showed a “20-minute window to make it out,” according to an investigative report released Tuesday.

Pilot Tim McCormack flew south above the East River for five-to-seven minutes, heading for the helicopter’s home airport in Linden, New Jersey, before radioing that he wanted to return to the heliport but “did not know where he was,” the National Transportation Safety Board report said.

McCormack, 58, was not authorized to fly in limited visibility, according to Federal Aviation Administration records.

The helicopter moved erratically during the 11-minute flight, changing course and altitude several times before making a sweeping turn and flying to within 500 feet of the midtown Manhattan heliport, investigators said in the preliminary report, citing tracking data for the June 10 flight.

The helicopter then reversed course again, investigators said, zooming north past the Empire State Building and other landmarks before slamming into the roof of the 750-foot (229-meter) AXA Equitable building in tightly controlled airspace near Trump Tower.

The crash obliterated the Agusta A109E helicopter, sparked a fire and forced office workers to flee. It briefly triggered memories of 9/11 and fears of a terrorist attack, but authorities were quick to reassure the public that there was no indication the crash was deliberate.

The preliminary report did not include any conclusions about the cause of the crash, but the details it contained pointed to the strong likelihood that foul weather played a role in the crash. It also raised the possibility that the helicopter was descending rapidly when it hit the roof.

The helicopter was tracked at an altitude of 1,570 feet above ground level — about twice the building’s height — moments before it crashed, investigators said. Engine controls were found in the “flight” position and throttle levers were set to “MAX.”

Social media videos reviewed by investigators showed the helicopter diving out of the clouds, leveling off and climbing back into the clouds and out of view a few minutes into the flight, the report said.

McCormack continuously checked weather conditions on his tablet computer for about two hours before deciding to take off, the report said, and just before leaving told heliport staff about seeing a window to fly.

The flight to Linden would have taken the helicopter south, over the city’s harbor and past the Statue of Liberty. It ended up crashing in an area where flights aren’t supposed to take place.

A flight restriction in effect since President Donald Trump took office prohibits aircraft from flying below 3,000 feet within a 1-mile radius of Trump Tower, only a few blocks from the crash site.

Helicopters going in and out of the heliport on Manhattan’s East Side are only allowed to fly in the restricted area if they have permission and are communicating with air traffic control at LaGuardia Airport. Investigators said McCormack never made such a request and didn’t contact air traffic control.

McCormack, a former fire chief in upstate Clinton Corners, had 15 years of experience flying helicopters and single-engine airplanes and was certified as a flight instructor last year. Linden airport director Paul Dudley said he was “a highly seasoned” and “very well regarded” pilot.