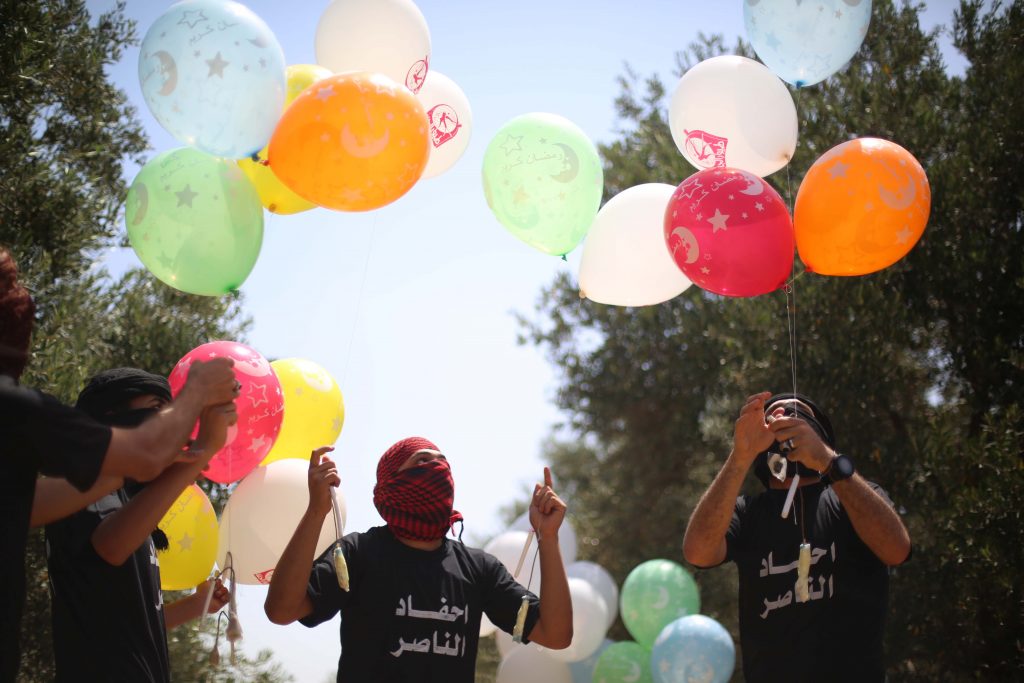 Some 200 heads of security in Israeli communities in the Gaza border area gathered Tuesday for an emergency meeting to discuss ways to combat the continuing plague of terror balloons coming from Gaza. On Tuesday, Channel 20 reported that seven fires had broken out as a result of balloons with attached incendiary devices dispatched by Gaza terrorists. The day before, four fires were reported, and on Sunday, three fires marred the Yom Tov of Shavuos.

The security heads were protesting the lack of resources provided them to deal with balloon terror, which has the capability of causing much damage and loss of life. Speaking to Channel 12, Sa’ar Margolis, head of security in Kissufim, a kibbutz located near the Gaza border, said that “the authorities expect us to deal with fires without equipment and without training and without the appropriate insurance. We are doing everything we can to ensure security for residents, but we are working hard to get the resources to do so.”

Nir Shirman, head of security in Moshav Dekel, said that “we are faced with a variety of problems, due to the heightened security issues and budget cuts. We decided that we needed to organize an effort to ensure that the budgets and resources needed to ensure security are in place.”

Budget cuts are an important motivation for the protests. Last week, Channel 12 reported on a document that was passed around among heads of security expressing concern over a proposed cut in budgets for security in communities in the Gaza border area as well as in Yehudah and Shomron, the Golan, and the Jordan Valley – cuts that would reduce the budgets of 430 towns, with the elimination of some jobs. The document said that the proposal, if approved, would be a “death blow to security” in affected communities, and that a mass protest needed to be organized to combat the cuts.

The IDF earlier this week again decreased the range Gaza fishing vessels could ply to 10 nautical miles off the coast. The reduction was in response to the dispatch of incendiary balloons by Gaza terrorists this week. Israel had agreed to increase the range fishing vessels could ply to 15 nautical miles as part of the understandings negotiated by U.N. and Egyptian mediators that led to the end of Gaza rocket attacks against southern Israel several weeks ago. The range for fishing vessels had been reduced to as little as six miles. Hamas and Islamic Jihad fired some 700 rockets at southern Israel during those attacks. Part of those understandings entailed an end to incendiary balloon attacks.