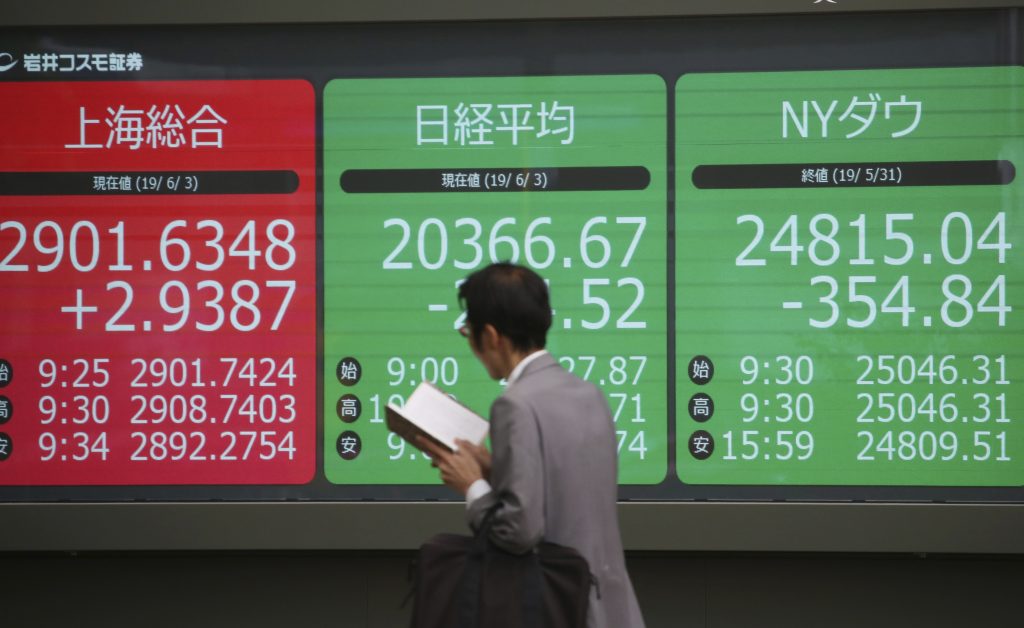 U.S. stock futures and commodity prices slipped while bonds rallied on Monday on worries that an intensifying Sino-U.S. trade tussle and Washington’s new tariff threats against Mexico could tip the global economy into a recession.

European shares are expected to follow suit, with futures for Britain’s FTSE and Germany’s DAX down 0.5% and 0.8%, respectively.

The CSI 300 index of Chinese shares was little changed.

A private survey on Chinese manufacturing sector published on Monday suggested a modest expansion in factory activity as export orders bounced from a contraction.

Yet economists noted the increase in new export orders point to possible front-loading of U.S.-bound shipments to avoid potential tariff hikes that U.S. President Donald Trump had threatened to slap on another $300 billion of Chinese goods.

A run of Chinese data recently, including an official survey on the nation’s manufacturing industry last week, also showed rising pressure across the world’s no. 2 economy.

Indeed, factory activity contracted in most Asian countries last month as businesses came under pressure from the bitter trade war between Washington and Beijing.

Sino-U.S. tensions escalated during the weekend as the two countries clashed over trade, technology and security.

A senior Chinese official and trade negotiator said on Sunday that the United States cannot use pressure to force a trade deal on China, refusing to be drawn on whether the leaders of the two countries would meet at the G-20 summit to work out an agreement later this month.

China will investigate whether FedEx Corp. damaged the legal rights and interests of its clients, the official Xinhua news agency said on Saturday, after Chinese telecoms giant Huawei said parcels intended for it were diverted.

“You could see this as a retaliation against Washington’s ban on Huawei. China could list FedEx in its black list of unreliable firms. We could see more of attacks on individual companies,” said Norihiro Fujito, chief investment strategist at Mitsubishi UFJ Morgan Stanley Securities.

The standoff between the world’s two largest economies go beyond trade, with tension running high ahead of the 30th anniversary of a bloody Chinese military crackdown on protesters around Beijing’s Tiananmen Square.

China’s Defense Minister Wei Fenghe warned the United States not to meddle in security disputes over Taiwan and the South China Sea.

The comments came after acting U.S. Defense Secretary Patrick Shanahan told the meeting on Saturday that the United States would no longer “tiptoe” around Chinese behavior in Asia.

“No one now thinks a deal would be possible at G-20. It is going to be a prolonged battle. Investors are rushing to the safe assets,” Mitsubishi’s Fujito said.

In a sign that Sino-U.S. frictions are putting a big strain on the global economy, South Korea’s exports – seen as a bellwether of world growth – fell 9.4% in May, worse than a median forecast for a 5.6% decline, official data showed on Saturday.

The gloomy economic outlook has prompted traders to increase bets that the U.S. Federal Reserve will cut interest rates sooner rather than later.

Fed funds rate futures are now almost fully pricing in two rate cuts this year, one by September, with more than 50%-chance of a move by July 30-31.

JPMorgan now expects the Fed to cut rates twice this year, a major change from its previous forecast that rates will stay on hold until the end of 2020.

In oil markets, U.S. crude futures dropped 0.7% to $53.12, having touching their weakest levels since mid-February earlier in the day.

In the currency market, the risk averse mood buoyed the yen and the Swiss franc.

The Swiss franc rose to its strongest against the euro since July 2017, climbing to 1.1157 franc per euro.

The Mexican peso, hit by Trump’s sudden threat to impose tariffs on Friday, regained some stability, trading at 19.6266 to the dollar, after its 2.5% fall on Friday.

Mexico’s president Andres Manuel Lopez Óbrador hinted on Saturday that his country could tighten migration controls to defuse tensions with Trump, saying he expected “good results” from talks planned in Washington this week.