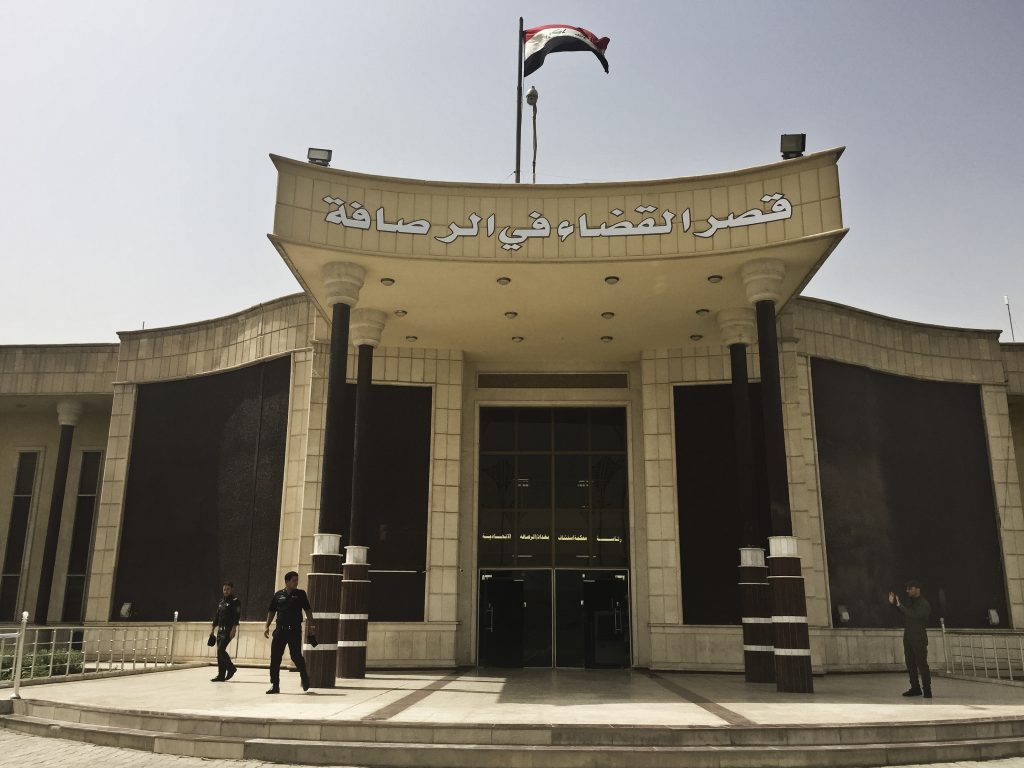 The French former members of the Islamic State terrorist group were brought into the courtroom in Baghdad one after the other on Monday and made to sit inside a wooden cage in the middle. As they spoke in French, a government official typed up the translation into Arabic, which immediately appeared on a large screen behind the judge that the court could read.

Mustafa Mohammed Ibrahim became the fourth French citizen to be sentenced to death by a Baghdad court for joining the Islamic State terrorist group that once controlled large parts of Syria and Iraq before its defeat. His trial comes as questions swirl about the legal treatment of thousands of foreign nationals formerly with the terrorist group.

Judge Ahmad Mohammed responded: “Your charge is a terrorist crime.”

The man who came from France to Syria to join the group in 2015 said he was the victim of its propaganda. The self-proclaimed caliphate had promised him a good life including money, work and a house. Jobless back in Europe, Ibrahim came to Syria via Turkey where he took religious lessons and weapons training. He then married a Moroccan widow with four children who later gave birth to his child.

When the judge asked Ibrahim if he was guilty, his response was: “I am not guilty of carrying out any crimes. I am guilty because they brainwashed me. I am the victim of the Islamic State. I am not guilty.”

“I am ready to help France in the fight against terrorism,” Ibrahim added.

France said the Iraqi court has jurisdiction to rule in the cases, though a spokeswoman reiterated the French government’s opposition to the death penalty.

The five Frenchmen on trial Monday — two were kept outside the courtroom — were among the 12 French IS fighters whom the U.S.-backed Syrian Democratic Forces handed over to Iraq in January. The Kurdish-led group spearheaded the fight against IS in Syria and has handed over to Iraq hundreds of suspected IS members in recent months.

As Monday’s proceedings opened, the first to appear was Ibrahim, who is from the Mediterranean city of Nice and of Tunisian origin.

“I ask for forgiveness from the people of Iraq and Syria and the victims,” Ibrahim said before the judge who ordered him to remove his top in order to see if there were any signs of torture on his body. None were visible.

“No matter what the sentence will be against me, I want to go back to my country,” said Ibrahim. He added that he used to work as a driver back in France before joining IS.

The judge sentenced Ibrahim to death. Asked by The Associated Press later why the sentencing happened so quickly, Mohammed said the “case was complete and ready for a verdict.” He added that regarding executions, Iraqi law sentences any member of the group to death whether the person “participates in fighting or not.”

The second man brought into the courtroom was identified as Fadil Hamad Abdallah, 33, of Moroccan origin. Abdallah said he was subjected to torture while in detention. The judge referred him to a medical committee for investigation and postponed his next session until Sunday. The judge postponed the sentencing of the three other Frenchmen until next Monday.

Three French IS fighters had already been sentenced to death on Sunday. Those convicted can appeal their sentences within a month.

Human rights groups have criticized Iraq’s handling of IS trials, accusing authorities of relying on circumstantial evidence and often extracting confessions under torture.

Nadim Houry, the Human Rights Watch’s director of its terrorism and counterterrorism program, said: “There are few rights for the defense and grave due-process issues — that’s deeply worrying, especially when combined with the death penalty. In-depth investigations are not being carried out.”

Houry added that no one should be transferred to a country where there is a risk of torture. “We have visited Iraqi prisons and we’ve seen rampant torture, usually to extract confessions,” he said.

Iraqi prosecutors say the 12 French nationals were parties or accomplices to IS crimes, and threatened the national security of Iraq. Simply belonging to the terrorist group is punishable by life in prison or execution under Iraq’s counter-terrorism laws.

In Paris, von der Mühll said France’s position is that adults detained in Iraq must be tried by the Iraqi justice system, as soon as it declares itself competent.

“France respects the sovereignty of Iraqi authorities” she added, though she expressed her country’s opposition to the death penalty, “in principle, at all times and in all places.”