Boston Yeshivah Boys Save Life of Man With Swastika Tattoo 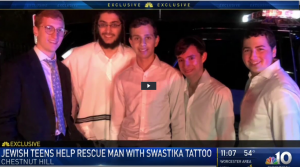 A group of Boston yeshivah boys helped save the life of a man drowning in a reservoir – and had no regrets upon discovering that he had a swastika tattoo.

NBC10 Boston reports that the boys, who attend a yeshivah in the Boston neighborhood of Brighton, were walking around the Chestnut Hill Reservoir late one recent night when they noticed a body in the water, partially submerged and not moving. The boys ran to Boston College Police Officer Carl Mascioli, who was on patrol nearby.

Mascioli ran down an embankment and pulled the man out of the water – and noticed that he had a swastika tattoo on his hand.

It is unclear how the man ended up in the water, but he is expected to survive.

“I kind of let the gentlemen know sometimes some deeds have a funny way of turning around,” Mascioli told NBC10 Boston. “Their good deed had a little bit of a twist to it.”

Mascioli said that when he told the boys that the man whose life they had saved had a swastika tattoo, they did not regret saving his life, and they asked that the officer let the man know that it was Jewish boys who had helped save his life.

“A good deed is a good deed, and that’s part of life,” said Mascioli. “We should be helping everybody out.”