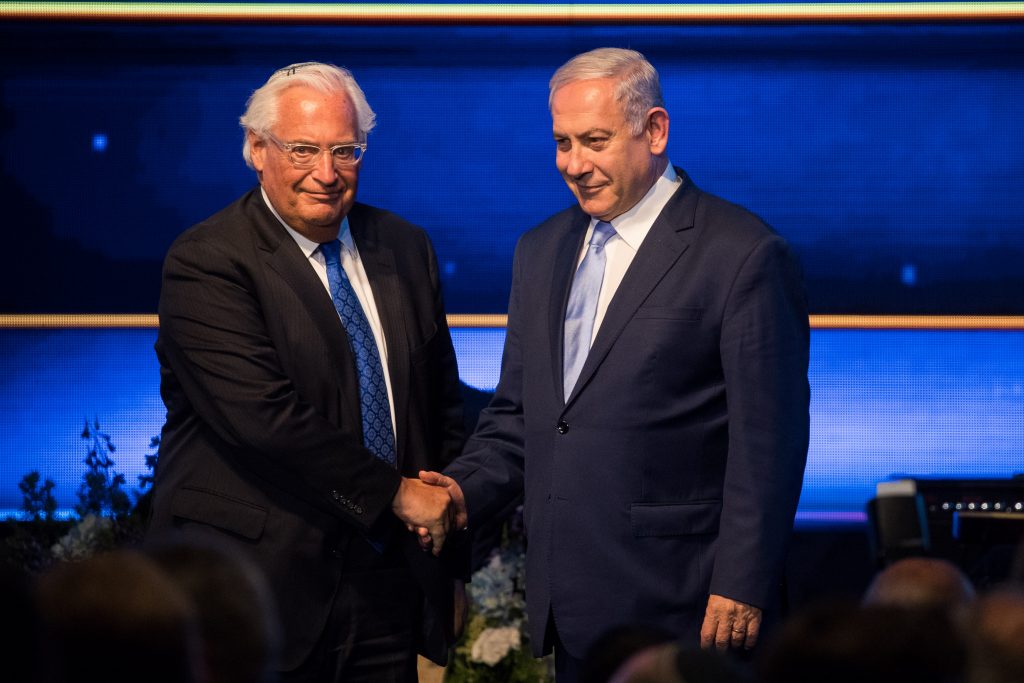 American and Israeli officials celebrated on Tuesday the first anniversary of the transfer of the United States Embassy to Yerushalayim.

Israeli Prime Minister Binyamin Netanyahu and Ambassador to Israel David Friedman were featured participants in the festive ceremony in the David Citadel Hotel in the capital.

“Today marks the one-year anniversary of the opening of the United States Embassy in Jerusalem, Israel. Our beautiful embassy stands as a proud reminder of our strong relationship with Israel and of the importance of keeping a promise and standing for the truth,” President Donald Trump wrote on Twitter.

Netanyahu thanked Trump for his “politically incorrect decision” to move the embassy. For many years, the nations of the world refused to recognize Yerushalyim as Israel’s capital, until, “one day, out of the blue,” Trump decided to recognize it.

“It’s politically incorrect, in a sophisticated way,” he added, to appreciative applause.

In remarks at the anniversary, Ambassador Friedman said: “365 days ago, about 3 hours ago, we opened up our embassy in Jerusalem on the 70th anniversary of the State of Israel – literally at exactly the day and the time when David Ben Gurion declared Israel’s independence.

“In less than six months [after President Trump recognized Jerusalem as the capital of Israel] we opened up a beautiful embassy in a beautiful ceremony and all the predictions – even some of our own predictions – about what could happen, about the risks, the violence, the gloom, the doom, the reality is that in the entire city of Jerusalem that day, I don’t think more than 20 people got up to protest,” he said.

“The embassy opened, the sun rose the next morning, and off we were under this new beautiful paradigm of an American embassy in Jerusalem.”

Nevertheless, the embassy issued a security alert on Monday night warning that “terrorist groups may choose the anniversary…to conduct violent protests or an attack.”