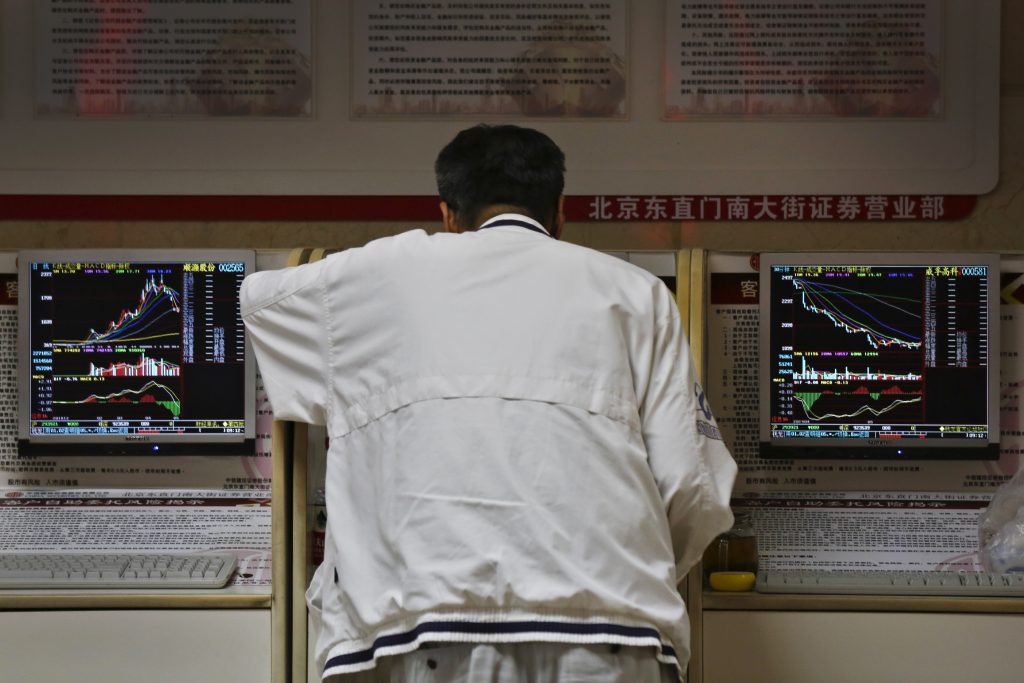 U.S. stock futures and Asian shares fell on Monday on growing anxiety over whether the United States and China will be able to salvage a trade deal, after Washington sharply hiked tariffs and Beijing vowed to retaliate.

The United States and China appeared at a deadlock over trade negotiations on Sunday as Washington demanded promises of concrete changes to Chinese law and Beijing said it would not swallow any “bitter fruit” that harmed its interests.

Investors are bracing for threatened “countermeasures” from China in retaliation for Washington’s tariff increase on Friday on $200 billion worth of Chinese goods. The move followed accusations by President Donald Trump that Beijing “broke the deal” by reneging on earlier commitments.

Chinese shares tumbled, with the benchmark Shanghai Composite and the blue-chip CSI 300 shedding 1.3% and 1.8%, respectively, while Hong Kong’s financial markets were closed for a holiday.

Japan’s Nikkei average sank as much as 1.0% to hit its lowest level since March 28, before it closed down 0.7%.

“We do not expect China to sell U.S. Treasuries,” ING said. This is a tool China will save as a last resort, and it may not even be used in the unlikely event of a breakdown in trade negotiations.”

White House economic adviser Larry Kudlow told a Fox News program that China needs to agree to “very strong” enforcement provisions for an eventual deal and said the sticking point was Beijing’s reluctance to put into law changes that had been agreed upon.

Kudlow said the U.S. tariffs would remain in place while negotiations continue and there is a “strong possibility” that Trump will meet Chinese President Xi Jinping at a G20 summit in Japan in late June.

“Our base case remains that a trade deal between the United States and China is likely. But news flow today suggests this could take more time and is unlikely to be concluded until late June,” said John Woods, Hong Kong-based chief investment officer of APAC at Credit Suisse AG.

Others were more pessimistic, noting that Washington said it was preparing to raise tariffs on all remaining imports from China, worth approximately $300 billion.

“Our base case is for limited progress and Chinese retaliation. We see a significant risk for all Chinese imports to be subject to tariffs over the next month or so,” said Michael Hanson, head of global macro strategy at TD Securities.

“The market reaction will ultimately depend on whether China and the U.S. continue to negotiate, whether the remaining $325 billion of U.S. imports from China also get tariffed, how China retaliates, and what happens to the [section] 232 auto tariffs.”

Under that scenario, the renminbi was likely to fall between 5%-6% against the U.S. dollar in the coming three months, said Hanson, as a shock absorber to the economic impact of heavier tariffs.

The offshore Chinese yuan fell to its lowest levels in more than four months at 6.88 to the dollar. It last stood down 0.6% at 6.86 per dollar.

Major currencies were relatively calm, with the safe-haven yen still supported but not aggressively so. The dollar was holding at 109.74 yen, down 0.2% on the day and just above a 14-week trough of 109.46.

“If there is a lack of progress (in the U.S.-China talks) over the coming weeks, Asian currencies will come under further pressure,” noted Khoon Goh, head of Asia research at ANZ Research, while adding that his team does not expect the yuan will break the psychological 7 per dollar level.

“While we hope for the best, our baseline case is now for the United States and China to fail to reach a deal, meaning tariffs will get raised on the remainder of Chinese exports to the United States.”

On the other hand, digital currencies maintained most of their big gains made over the weekend.