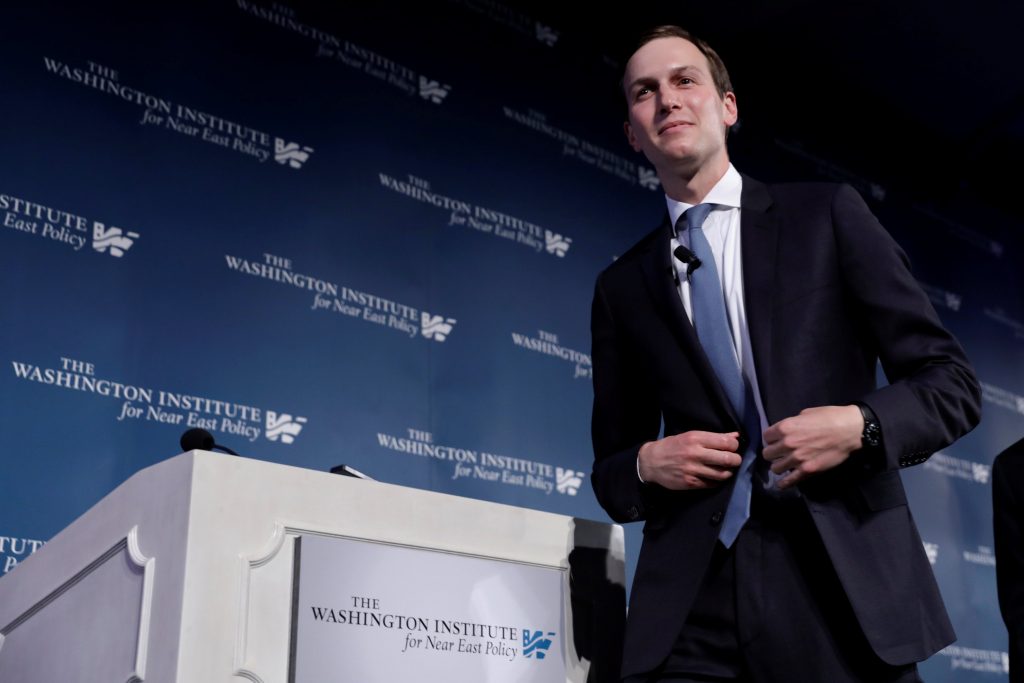 Prime Minister Binyamin Netanyahu had vowed in the waning days of a re-election campaign he won on April 9 to annex Israeli communities, in a move that would be bound to trigger condemnation from the Palestinians and the Arab world and complicate the U.S. peace effort.

Kushner, speaking at a dinner of the Washington Institute for Near East Policy, said the Middle East peace proposal he has been putting together was close to release and that Israel and the Palestinians should wait to see it before making any unilateral moves.

He said the issue would be discussed with the Israeli government when Netanyahu forms a governing coalition.

“I hope both sides will take a real look at it, the Israeli side and the Palestinian side, before any unilateral steps are made,” Kushner said, adding he had not discussed the issue of annexation with Netanyahu.

Kushner and Middle East envoy Jason Greenblatt have spent the past two years developing the peace proposal in the hopes it will provide a framework for a renewed dialogue between the Israelis and Palestinians.

Kushner is expected to unveil his proposals in June after the Muslim month of Ramadan.

“What we will be able to put together is a solution that we believe is a good starting point for the political issues and then an outline for what can be done to help these people start living a better life,” Kushner said.

“I was given the assignment of trying to find a solution between the two sides and I think what we’ll put forward is a framework that I think is realistic … it’s executable and it’s something that I do think will lead to both sides being much better off,” Kushner said.

Kushner has begun to take a more public role in the Trump administration since he emerged unscathed from Special Counsel Robert Mueller’s probe into whether the Trump presidential campaign in 2016 colluded with Russia.

Trump has relied heavily on the 38-year-old Kushner, who helped develop prison reform legislation and a new U.S.-Mexico-Canada trade deal, and is also working on a U.S. immigration proposal.

The Middle East proposal, which has been delayed for a variety of reasons over the past 18 months, has two major components. It has a political piece that addresses core issues such as the status of Jerusalem, and an economic part that aims to help the Palestinians strengthen their economy.

Kushner has said the proposal is not an effort to impose U.S. will on the region. He has not said whether it calls for a two-state solution, a goal of past peace efforts.

On Thursday night, he called on critics to hold their fire until they are able to see the plan in its entirety.

Greenblatt has said U.S. negotiators expect Israelis and Palestinians will both be critical of some parts of the plan.