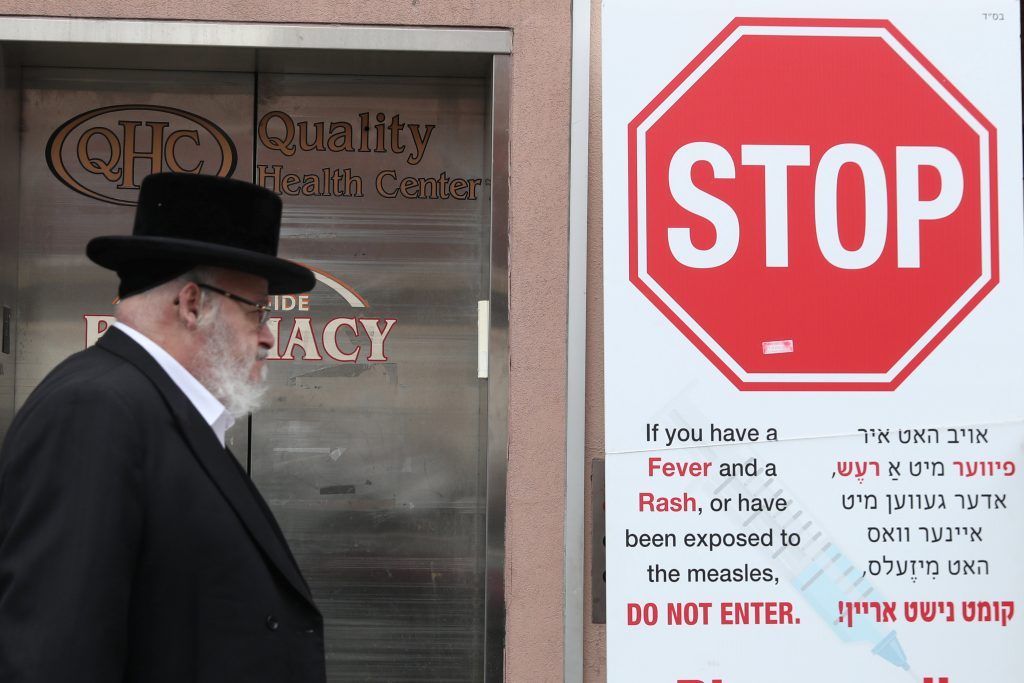 The Williamsburg Jewish community has snapped into action in response to the declaration of a public health emergency by city officials.

The unusual order, which among other things threatens with fines families who do not vaccinate their children, was introduced last week by Mayor Bill de Blasio, citing a rapid increase in the number of confirmed cases in the city — particularly in Williamsburg.

Since then, a community askan told Hamodia that the neighborhood’s mosdos have complied with the city’s orders to exclude unvaccinated children from classes until the emergency is declared over.

“As the city has made clear, vaccination rates in the community were already high, but this declaration has certainly showed some of the outliers that they have to take this seriously and vaccinate their children, especially if they want to be let back into school,” said the askan.

Over the past week, several city agencies have been carrying out inspections of Williamsburg schools, checking their vaccination records. In the torrent of requests for information, one day-care center under the auspices of Satmar’s educational network, UTA, was temporarily closed for allegedly failing to produce the requested vaccination records. A source familiar with the events told Hamodia that the “failure” was in no way an attempt to hide information and was merely the result of a technical impasse.

“The city is under tremendous pressure to show that they are taking this seriously, which is understandable, but the result is that schools are being asked to produce the same documentation to a few agencies and they don’t all have the staff to do that in the short time they are being given,” said the source, who asked not to be named.

According to the source, the day-care center was visited last week, and when not all of the documents were available, an inspector said that there would be another visit that coming Monday. On Monday, staff had all the information ready, but were served with a closing notice.

“Long before this outbreak, UTA has always been very strict with vaccination, and their rates are among the best in the city,” said the source. “It’s unfortunate that the bureaucratic mishap occurred. They are working with the city to sort it out as soon as possible.”

In his weekly “Inside City Hall” interview, Mayor de Blasio confirmed that the closing of the UTA center was part of an attempt to crack down on compliance. He also reiterated a message he has stressed since introducing the emergency order:

“I hasten to add that I think the vast majority of leaders and organizations and institutions in Williamsburg, in the Orthodox Jewish community, have been very helpful, very supportive, got out, spread the word, and we’re seeing a lot of positive activity,” said the mayor. “People are taking it seriously. There is a small, I think very — angry if you will — loud, anti-vaxxer group that keeps trying to convince parents not to have their kids vaccinated. I think the vast majority of voices in Williamsburg are making very clear to parents that they should get vaccinated. I think the clear message that we’ve sent, that our Health Department will issue violations to those who haven’t gotten vaccinated and that could be up to $1,000 per violation. I think all these pieces are going to come together and really turn the tide here. But we’re not out of the woods yet.”

The mayor’s “$1,000” comments refers to a threat of fines for unvaccinated families who have been exposed to measles but refuse to get immunized.

In an interview with the Associated Press, Yeshiva Kehilath Yakov-Pupa’s school administrator, Rabbi Dovid Oberlander, said that staff had taken pains to make sure children with measles were not in school.

Some opponents of vaccination — and civil rights groups — have questioned the order, and a legal challenge has been filed.

According to available statistics, more than 95 percent of the Williamsburg community is vaccinated against measles, roughly equivalent to most other areas of the city.

Despite the support from community leaders in fighting the outbreak, and clear statements from city officials to the contrary, increased reporting on the outbreak, which has largely affected the Orthodox community, has sparked media reports and social media comments implying that the Jewish population was endangering others by spreading the disease, often evoking anti-Semitic rhetoric in the process.

In a discussion with Hamodia a day after the emergency announcement, Rabbi Dovid Neiderman, president of United Jewish Organizations of Williamsburg and North Brooklyn, addressed the recent outbreak and attempted to dispel some of the inaccuracies that had been reported.

“The DOH has been visiting our schools on a daily basis, and contrary to what is being reported in the media, the schools are cooperating in the task of ensuring that all students have been properly vaccinated,” he said. “During the current outbreak, we reinforced our view of the necessity to vaccinate, and this is being communicated with support of the schools, rabbinic leadership and the Department of Health.”

Although there are some residents who are passionate about not vaccinating their children, Rabbi Neiderman emphasized that the impression that this is the position of community leaders and spiritual guides is incorrect.

“Unfortunately, some people are ardent followers of the anti-vaxxer movement, and they have been misled by the junk-science that has been spread by this movement,” he said. “The same way populations across the country and globe are infected with falsehoods about vaccines, we are not immune to those same anti-vaxxer forces.

“Despite all our efforts, a small fraction of people in the community are still influenced by anti-vaxxer ideology that spreads fear of vaccines. Community doctors whom we trust and rely upon for medical advice in caring for our children and serving our seniors urge us to vaccinate. We urge the public to follow their guidance and medical knowledge … and we hope and pray that this outbreak should end soon.”