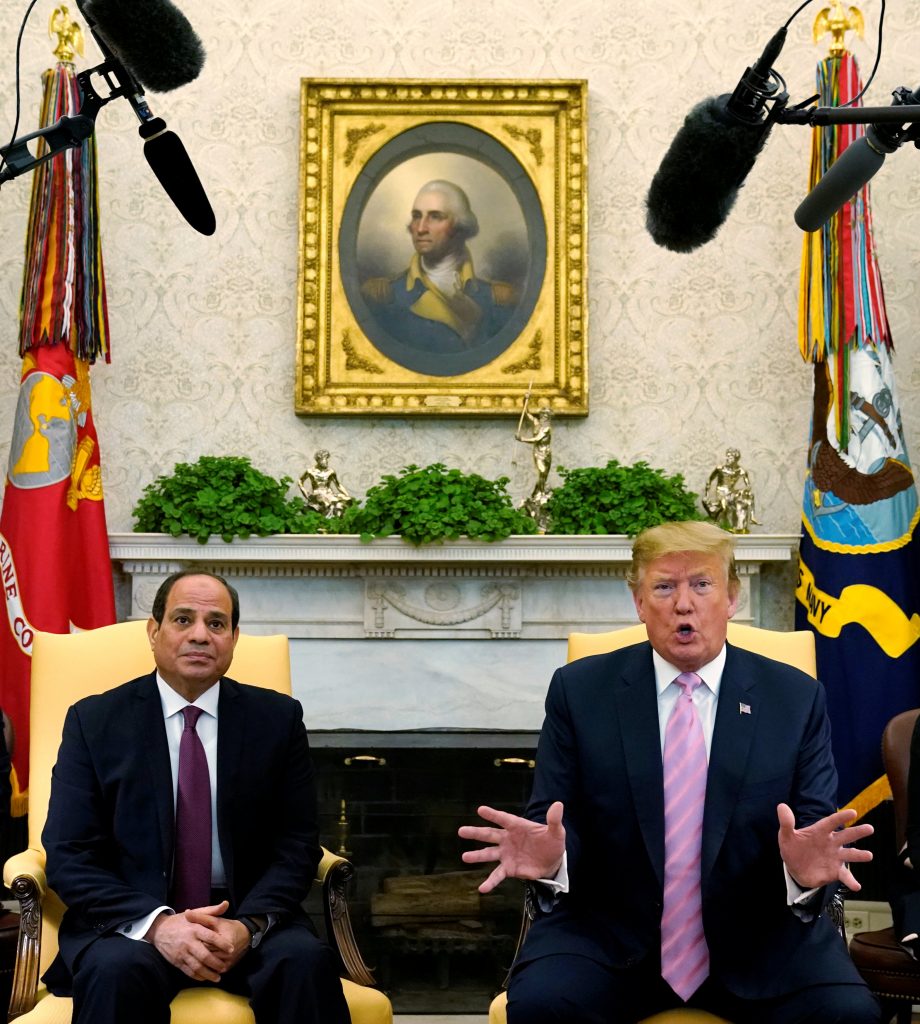 President Donald Trump praised his Egyptian counterpart Abdel Fattah el-Sisi as a “great president” on Tuesday despite U.S. lawmakers’ concerns about his record on human rights, efforts to keep him in office until 2034 and planned Russian arms purchases.

Egypt’s parliament has proposed constitutional reforms aimed at allowing el-Sisi to remain in power until 2034, a move criticized by senior U.S. lawmakers and advocacy groups who are also disturbed by Egypt’s repression of human rights.

Asked if he backed the efforts to allow el-Sisi to potentially stay in power for another 15 years, President Trump told reporters: “I think he’s doing a great job. I don’t know about the effort, I can just tell you he is doing a great job … great president.”

El-Sisi is a former general who came to power after the military overthrew Islamist President Mohammed Mursi in 2013 following mass protests against his rule. El-Sisi was elected president the following year.

Egypt, the Arab world’s most populous nation, is of strategic importance to the United States because of its peace treaty with Israel and its control of the Suez Canal, a vital waterway for global commerce as well as the U.S. military.

The U.S. Congress has appropriated $1.4 billion in bilateral assistance for Egypt in the current fiscal year, the same amount provided the previous year, according to a report by the Congressional Research Service.

While there continues to be support for aid to Egypt, members of Congress have voiced deep concerns about its reported signing of a $2 billion deal with Russia to buy more than 20 Sukhoi SU-35 fighter jets and weapons for the aircraft.

In a letter released on Monday, leading senators also said Egypt had “unjustly detained more than a dozen Americans,” called for their release, and raised “serious concerns about the erosion of political and human rights.”

“We are concerned (about) their deepening relationship with Russia, which also includes the loan that Moscow has provided to construct the nuclear power plant at Dabaa,” it said, referring to a 4,800 megawatt plant aimed to be in service by 2026.

The senators asked Pompeo to request that el-Sisi “reevaluate these decisions, which risk making his country a Russian dependency once again.”

Egypt and the Soviet Union were close allies until the 1970s, when Cairo moved closer to the United States, which brokered its 1979 peace deal with Israel.

Trump did not directly address the issue of Egypt’s planned Russian arms purchase. He said, “a lot of progress has been made … in terms of terrorism and other things with Egypt.”

“We’ve never had a better relationship, Egypt and the United States, than we do right now,” President Trump added as the two men spoke to reporters before meeting in the White House Oval Office.

“All the credit goes to you, Mister President,” el-Sisi responded through an interpreter. “Thank you very much for your support on all fronts.”