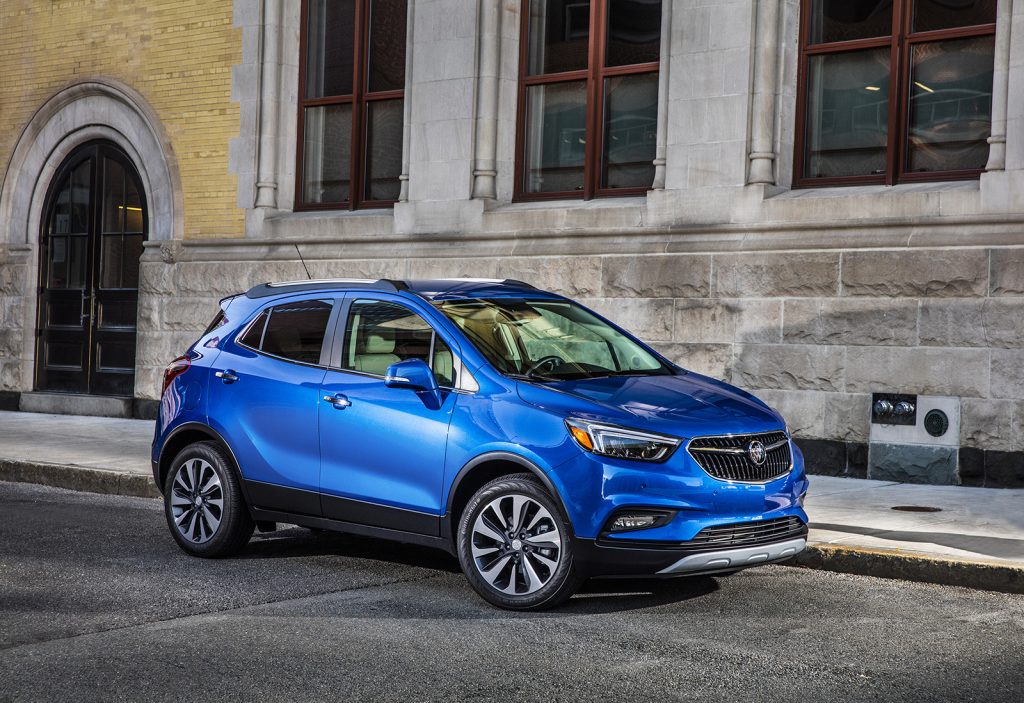 A major freshening of the five-passenger Encore made it even better for year 2017.

The interior got its share of changes as well, with a new instrument layout, eight-inch touch-screen audio system, 4.2-inch driver-information screen, chrome accents, contrast stitching on upholstery, and premium materials.

Our test vehicle for this report was the top-end Essence model with all-wheel drive (base price $30,800).

Also new for 2019 is the Safety Package II ($940), available only on the Essence trim. It was included on our tester, and it added rain-sensing wipers, front and rear park assist, Forward Collision Alert, Lane Departure Warning and an air ionizer.

New exterior colors for 2019 are Satin Steel Gray Metallic, which was the color of our tester, and Deep Azure Metallic. On the Essence model, only Summit White is available at the base price. Our car’s Satin Steel Gray, the Deep Azure and four other metallic colors — Ebony Twilight, Quicksilver, Winterberry Red and Coppertino — are $495 extra, and White Frost Tricoat adds $1,095 to the sticker price.

The Encore is a big part of efforts to bring new, younger buyers to Buick as it tries to rebuild a brand that had long been associated with big cars and older clientele.

This small crossover is a version of the Opel Mokka, from GM’s now former German subsidiary that was sold to French automaker Peugeot in 2017. The Buick Encore and the similar Chevrolet Trax are assembled in GM’s plant in South Korea.

Encore is a junior version of the full-size Enclave crossover and is among a growing number of small crossovers introduced by a variety of automakers as more consumers look for vehicles that are versatile and economical to operate.

Along with the addition of the slightly larger China-built Envision compact crossover for 2016, Buick now has three crossovers, as well as a wagon version of the Opel-based Regal midsize sedan, called the Regal TourX.

With room for up to five people, the Encore was designed for young, upwardly mobile singles and couples looking for a vehicle that fits their active lifestyles. It also appeals to empty-nesters and retired consumers.

For 2016, the Sport Touring model was added to the lineup. It comes with some unique features, such as 18-inch aluminum-alloy wheels with midnight silver finish, rear spoiler, and body-color door handles.

The base engine is a 1.4-liter turbocharged Ecotec four-cylinder with 138 horsepower and 148 foot-pounds of torque. It’s connected to a six-speed automatic transmission.

Optional on the Sport Touring and Essence models, for $250 extra, is a more-powerful 1.4-liter Ecotec turbo four-cylinder engine with start-stop technology. It has 153 horsepower and 177 foot-pounds of torque. It’s also paired with a six-speed automatic. This engine was included on our test vehicle.

The Encore comes with OnStar with 4G LTE connectivity and a built-in Wi-Fi hotspot. That gives everyone in the vehicle access to the internet while the vehicle is in range of cell towers. GM says the hotspot is on whenever the car is running, and it includes a free three-month trial subscription.

Encore’s all-wheel drive is designed to send power almost 50-50 to the front and rear on startup but favors the front wheels in normal driving until the automatic system detects wheel slippage. There is no low-range gearing for serious off-road driving, however.

Available high-tech safety features include Rear Cross Traffic Alert and Side Blind Zone Alert systems, included on all but the base model.

Driving the Encore is rather fun for a crossover. Even the base engine is turbocharged, which gives it a good boost when the accelerator is mashed. With either engine, you’ll get the same six-speed automatic transmission.

The electric power steering was precise and predictable, and the four-wheel antilock disc brakes made for quick and sure stopping, even in the occasional near-panic situations that seem to occur with more frequency when traffic gets thick.

With its small size and light weight (about 3,400 pounds), the Encore offers the best fuel economy in the Buick lineup, and EPA ratings that are among the best in the crossover realm. With the base engine and front drive, the estimates are 25 mpg city/30 highway/27 combined; for all-wheel-drive models, 24/29/26. The optional turbo engine is rated slightly better, at 26/31/28 for front drive, and 25/30/27 with all-wheel drive.

During my test, I averaged about 26.8 mpg, with a combination of city and highway driving.

Inside, the Encore doesn’t feel small. Tall people — six feet or more — can ride in comfort in the front bucket seats, and they’re riding higher up than you would imagine in a vehicle with such a small exterior size. There is no feel of being in a tiny vehicle, sitting close to the ground.

Outside, the Encore looks somewhat like a junior-size version of the seven-passenger Enclave, with similar front-end styling and overall shape, and the signature Buick grille.

We were able to seat three average-size adults in the rear bench seat for some short trips. Outboard passengers had plenty of leg and knee room, although the middle rider was a bit cramped and suggested that might not be a good place for a long trip. A child safety seat would fit there well, however, with two larger kids or even small- to medium-size adults on each side.

But the only cupholders in the back were a pair in a small pull-down center armrest that eliminates the middle seating position. Small door pockets were not wide enough to serve as bottle holders either in front or back.

In the front, the center console area provides two small cupholders and a lidded compartment for gadgets. In front of the shifter is a slanted cubby suitable for a couple of portable devices, and there are USB and auxiliary ports right next to a 12-volt power outlet in front of the storage spot.

There are 18.8 cubic feet of cargo space behind the rear seat, accessed through a rear hatch that flips up in one piece for easy loading and unloading. Fold down the rear seatback, though, and the cargo area expands to a whopping 48.4 cubic feet. You could get a big-screen TV box back there, if necessary.

Even the base model comes loaded with features such as OnStar, cruise control, premium cloth upholstery, heated outside mirrors, six-way power driver’s seat with lumbar adjustment, and power windows/door locks with remote.

Other extras on our test vehicle included a power sunroof ($900) and Bose premium audio system ($595) with HD radio.

Total sticker price for our 2019 Buick Encore Essence with all-wheel drive was $34,975, including freight and options.

Highlights: Introduced for 2013 and updated extensively two years ago, this is the smallest vehicle in the Buick lineup, made on the same chassis as the Chevrolet Trax and the Opel Mokka, which is sold in Europe and Asia. It offers sporty handling for a utility vehicle, decent performance with its turbocharged engines, decent fuel economy, and plenty of utility.

Negatives: Can be a tight fit for adults in the back seat.