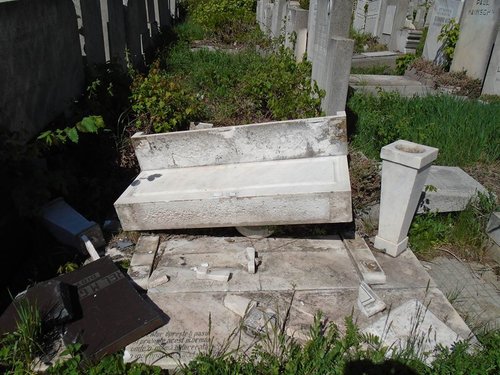 The United States on Friday condemned the vandalising of a Jewish cemetery in Romania’s eastern town of Husi, where 73 tombstones were found destroyed by unidentified perpetrators, and urged authorities to bring those responsible to justice.

The case follows an attack last year on Holocaust survivor Elie Wiesel’s memorial home in north Romania’s Sighet – painted with anti-Semitic fluorescent pink graffiti which led to the rapid arrest of the perpetrator, a 37-year-old man.

“We stand together with the Jewish families whose loved ones’ graves were desecrated and call for those responsible for this attack to be brought to justice,” it said.

Husi mayor Ioan Ciupilan, told local paper Vremea Noua after he visited the place he felt sorry about the incident, adding: “over the past 60 years no one has heard of a similar deed.”

“I can’t give a verdict myself that a human did this.”

Romania was an ally of Nazi Germany during World War Two until it changed sides in August 1944. An international commission in a 2004 report put the total number of Romanian and Ukrainian Jews who perished in territories under Romanian administration at 280,000 to 380,000.

After the collapse of the communist dictatorship of Nicolae Ceausescu in 1989, Romania passed laws to return property to the original owners but the process has been hampered by red tape.

It has only in recent years begun to come to terms with its role in the extermination, admitting for the first time in 2003 that it took part. Knowledge of the Holocaust and sensitivity towards it remain patchy.