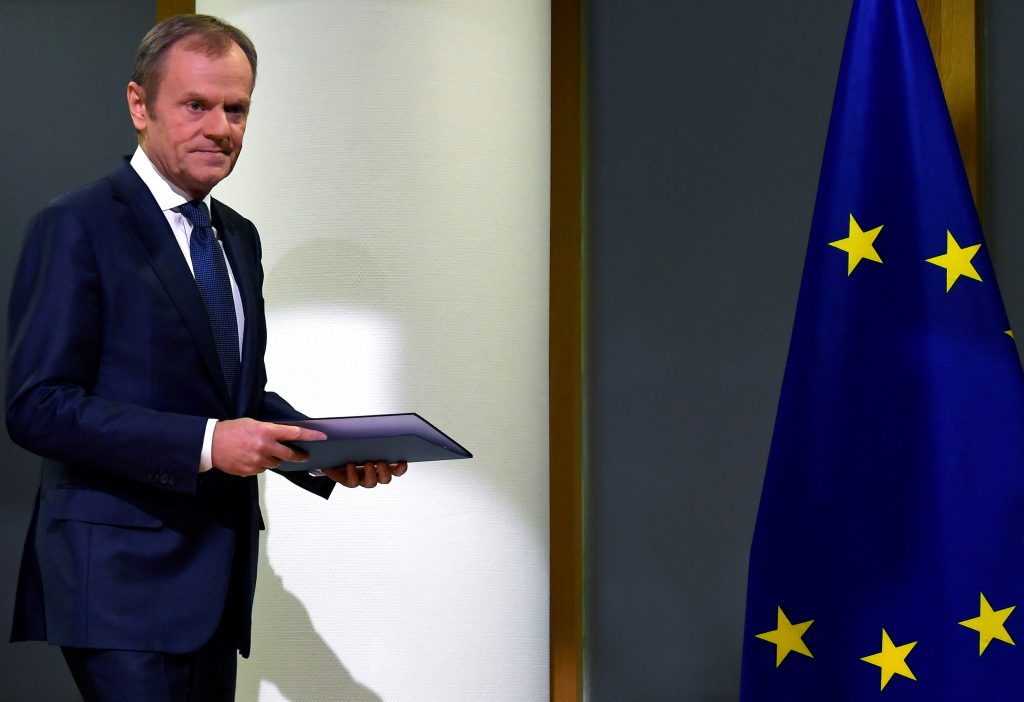 British Prime Minister Theresa May returned on Friday to her mammoth struggle of persuading a deeply divided parliament to back her Brexit deal after an EU summit granted her more time but little to help change minds in London.

After a bruising day in Brussels, May secured a two-week reprieve to try to get the deal she negotiated in November through parliament at a third attempt or face a potentially chaotic departure from the European Union on April 12.

But while the Brexit deadline has moved – from an original March 29 deadline – parliament has not.

In fact, incensed by comments from May that pinned the blame for Britain’s Brexit chaos on them, many lawmakers have hardened their resistance to the deal she will bring back before them next week.

In an appeal to the very same lawmakers she criticised on Wednesday, May said in the early hours of Friday: “I know MPs (members of parliament) on all sides of the debate have passionate views, and I respect those different positions.”

“Last night I expressed my frustration. I know that MPs are frustrated too. They have difficult jobs to do. I hope we can all agree, we are now at the moment of decision.”

She needs to change the minds of 75 more lawmakers to get her deal through after it was overwhelmingly rejected twice before.

EU leaders were keen to increase the pressure on Britain’s parliament, which is also expected next week to try to wrest control of the Brexit process from May’s government.

Arriving for a second day of the EU summit on Friday, Belgium’s prime minister said he hoped for a rational decision by British lawmakers, while warning that preparations for a no-deal, in which Britain would face sudden trade barriers and restrictions on business, were still underway.

“This is perhaps the last chance for Britain to say what it wants for the future,” Charles Michel told reporters. “More than ever, this is in the hands of the British parliament.”

Several leaders said they doubted whether May could get her deal through parliament, which like the country itself is deeply split over how, or even if, Britain should leave the EU after a 2016 referendum in which 52 percent backed Brexit and 48 percent voted to remain.

Parliament will start next week with another vote on Brexit, which may open the way for lawmakers to be able to vote on alternative options for Britain’s departure.

With parliament deadlocked, the lack of certainty is forcing some Britons to try to influence politicians from the streets or over the Internet.

Hundreds of thousands of Britons are expected to march through central London on Saturday calling for a second Brexit referendum, while an online petition demanding May revoke the so-called Article 50 negotiating period and stop Brexit altogether has received more than 3 million signatures.

Luxembourg’s Prime Minister Xavier Bettel said he believed May had a 50:50 chance of getting the deal through the House of Commons. “Hope dies last with me,” Bettel said.

But French President Emmanuel Macron told the summit that before coming to Brussels he had thought May had only a 10 percent chance of winning the vote. After listening to the prime minister, he said, he had cut his estimate — to five percent.

Seven hours of summit brainstorming on Thursday kept a host of options open for the EU leaders, who say they regret Britain’s decision to leave but are eager to move on from what they increasingly see as a distraction.

A first-ever leaders’ dinner debate over the EU’s China policy at the summit got delayed until Friday.

May, who addressed leaders on Thursday but missed out on the dinner because the 27 were forced to focus on Brexit rather than China, was kept in the loop by summit chair Donald Tusk, the European Council president, who shuttled back and forth.

Tusk explained the leaders’ thinking to May and secured her acceptance for the plans, officials said.

May originally wanted to be able to delay Britain’s departure until June 30 to tie up legislative loose ends.

But now, a May 22 departure date will apply if parliament rallies behind the British prime minister next week. If it does not, Britain will have until April 12 to offer a new plan or decide to leave the European Union without a treaty.

“We wanted to support May and we showed that,” German Chancellor Angela Merkel told reporters. “It was an intensive, but successful evening.”

A senior EU official said the key achievement was to shift the focus of responsibility to London from Brussels.

But the details of exactly how and when Britain would leave on or after April 12 are still somewhat vague.

It might leave abruptly at midnight (2200 GMT) on that Friday night. But EU officials said it could also agree a date with the EU to leave later, deal or no deal.

That could give some weeks to make a no-deal exit somewhat less chaotic, though the EU will refuse attempts to try and emulate the smoothness of the withdrawal treaty.

It would also try for Britain being out by May 22 to avoid problems over the EU election on May 23-26, but some leaders indicated they could cope with Britain leaving any time until June 30 – before the new European Parliament convenes on July 2.

In the case of a longer extension, the main idea is for one-year, EU officials said. That would give Britain time to hold an election, and possibly a second referendum if it chose to, and avoid a longer delay that would complicate negotiations for a new long-term EU budget.