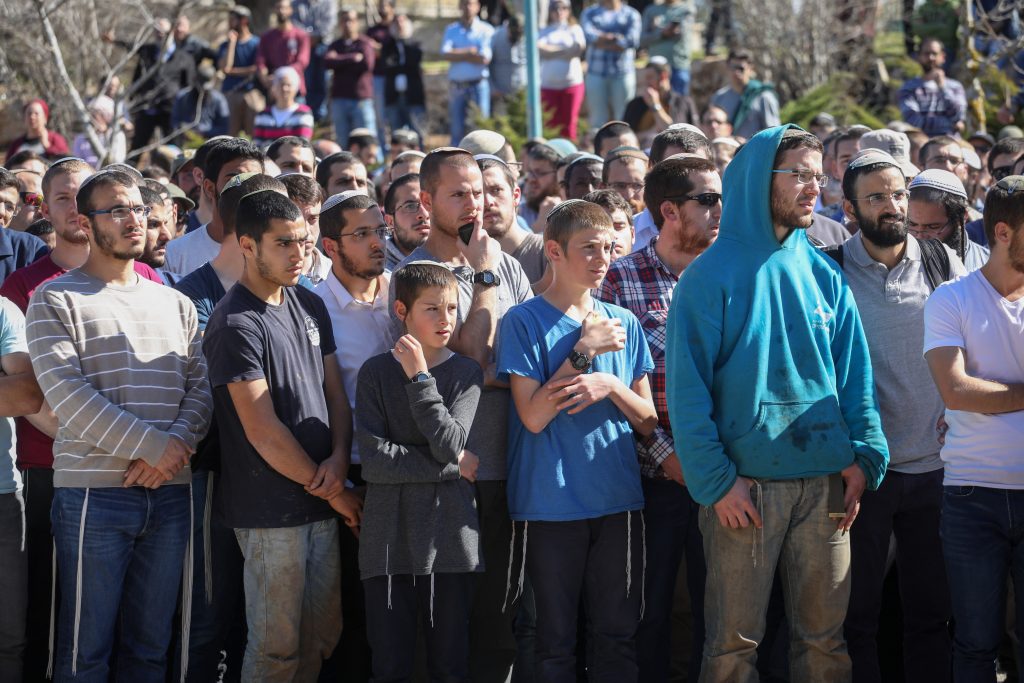 IDF troops continued their dragnet search for Omar Abu-Leili, the Arab terrorist whose second victim, Rabbi Achiad Ettinger, Hy”d, was niftar Monday morning. Rabbi Ettinger, a resident of the town of Eli in Shomron and a father of 12, was injured in the Shomron terror attacks Sunday. In a statement, the family said that during the attack, ‘Rabbi Ettinger displayed bravery and determination, as he tried to shoot the terrorist. The family thanks the staff of Beilinson Hospital, the Magen David Adom staff, and security forces, and all of Am Yisrael who davened for him.”

The levayah of Rabbi Ettinger was held Monday afternoon in Eli, and later kevurah was in Petach Tivka’s Segulah cemetery.

Although the terrorist who murdered Rabbi Ettinger and IDF officer Gal Keidan, Hy”d, is still at large, he was named Monday as Omar Abu-Leili, a 19-year-old resident of the village of Zaviya, which is very close to Ariel. IDF soldiers overnight Sunday arrested his brother and father, and the location of the home has been mapped for demolition. The levayah for IDF soldier Gal Keidan will be held later Monday.

The search for the terrorist was continuing on Monday. Overnight Monday security forces entered a number of villages, with several gun battles reported in villages. Tight security has been posted outside all the Arab villages in central Shomron, as soldiers continue to search inside the villages.

Footage of the attack, from a security camera posted at the bus stop where Abu-Leili stabbed Keidan and grabbed his gun, shows the progression of the attack. After grabbing the weapon, the terrorist shot Keidan at close range. Soldiers from across the road shot at the terrorist, and the IDF believes that he may have been injured in the gunfire. Despite that, he was able to continue his rampage, shooting and mortally wounding Rabbi Ettinger – who drew his gun, but was unable to get off a shot before the terrorist shot him – and then stole a vehicle, which he used to drive to the Gitai Avisar Junction, where he shot and badly injured another soldier.