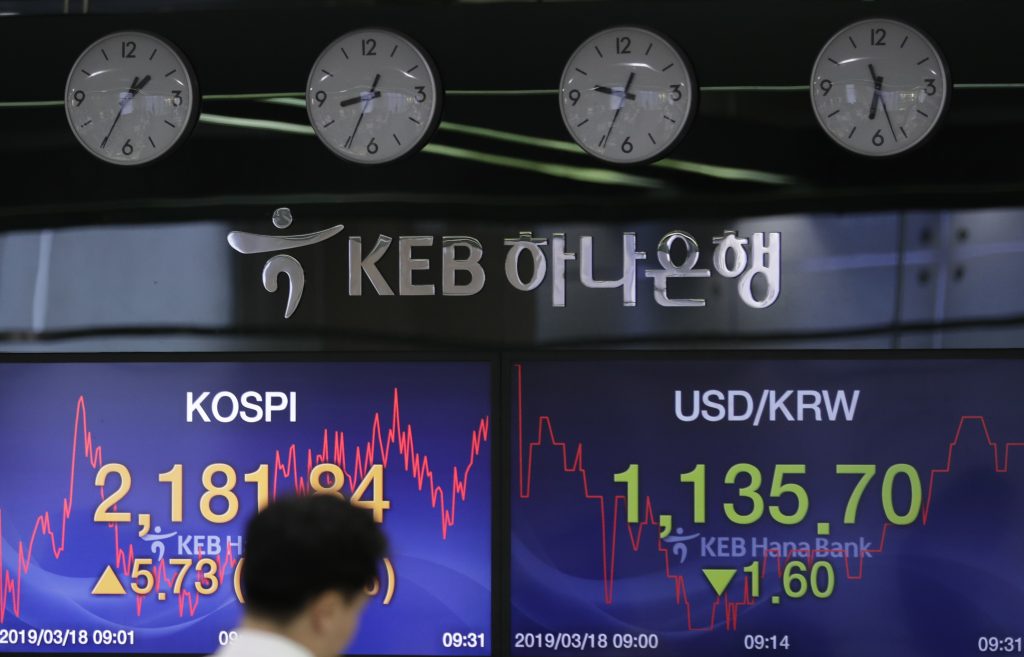 Asian shares pulled ahead on Monday while bonds were in demand globally on mounting speculation the Federal Reserve will sound decidedly dovish at its policy meeting this week.

Shanghai blue chips climbed 1.6 percent and spread-betters pointed to modest opening gains for the major European bourses. One focus will be shares in Deutsche Bank and Commerzbank after the banks confirmed they were in merger talks.

E-Mini futures for the S&P 500 dithered either side of flat. The S&P 500 boasted its best weekly gain since the end of November last week, while the Nasdaq had its best week so far this year.

There is much talk Fed policymakers will lower their interest rate forecasts, or “dot plots,” to show little or no further tightening this year.

Also expected is more detail on a plan to stop cutting the Fed’s holdings of nearly $3.8 trillion in bonds. The two-day meeting ends with a news conference on Wednesday.

As a result, yields on three- and five-year Treasuries are dead in line with the effective Fed funds rate, while futures imply a better-than-even chance of a rate cut by year end. “Long-term bond yields remain noticeably lower across a wide range of countries,” said Alan Oster, group chief economist at National Australia Bank.

“Markets are pricing in little or no chance of a rate hike by the major central banks this year, outside of the Bank of England. The Fed is indicating that it will be patient and we don’t expect any rate hikes this year.”

Data on Friday showed U.S. manufacturing output fell for a second straight month in February and factory activity in New York state hit nearly a two-year low this month, further evidence of a sharp slowdown in economic growth early in the first quarter.

A marked decline in Treasury yields has dragged on the dollar, leaving it at 111.53 yen from a top of 111.89 on Friday. Against a basket of currencies, the dollar was pinned at 96.498 having shed 0.7 percent last week.

The euro was holding at $1.1333, well up from the recent trough of $1.1174 which was hit when the European Central Bank took a dovish turn of its own.

Sterling was steady at $1.3289 as markets await some clarity on where the Brexit drama was heading. British Prime Minister Theresa May’s government is scrambling to get support in Parliament for her Brexit deal.

May has only three days to win approval for her deal to leave the European Union if she wants to go to a summit with the bloc’s leaders on Thursday with something to offer them in return for more time.

“Most Brexit permutations look moderately GBP positive for the week but long-term challenges were underscored by the British Chambers of Commerce (BCC) forecasting a cut to business investment by the most in 10 years,” said from Sue Trinh, RBC Capital Markets‘ head of Asia FX strategy.

The BCC forecast a 1-percent drop in investment over 2019.

In commodity markets, spot gold eased slightly to $1,298.81 per ounce.