The exhibit was the culmination of a semester-long program on Churban Europa, based on materials provided by Project Witness. The program spanned Historia class, World History class, and English class.

Girls worked closely with Mrs. Sari Waxman, their Historia teacher, both in doing their research and in designing their display.

Stirring and poignant displays produced by the students were presented at the exhibit; each one the result of thorough research completed by the students on an assigned topic. Guests viewed the displays, as the girls offered articulate explanations on the topics at hand.

These topics included the rise of Hitler; spiritual heroism in the ghetto; spiritual heroism in the concentration camps; she’eilos that were asked in the concentration camps, the Bais Yaakov movement before, during, and after the Holocaust; the Kindertransport, the escape of the Mirrer Yeshivah, America’s response, partisans, chassidei umos ha’olam, Nazi propaganda, shuls in pre-war Europe, Kristallnacht, the Warsaw Ghetto, Hatzalah efforts, the Nuremberg Trials, and the transplanting of yeshivos in Eretz Yisrael and America after the war.

Mrs. Suri Gibber, Menaheles, explained that the concept of “Spiritual Heroism” was a thread which ran through the entire program.

“We taught the girls the song, Zachor Davar L’avdecha, and emphasized that even in these very difficult times, the Jewish People did not forget the Torah and mitzvos,” she related.

Consequently, the entire program, as well as the exhibit, was extremely inspiring for the students. As one 11th-grader who worked on the display about the Bais Yaakov movement expressed it, “I was so inspired to see how during the war, Bais Yaakov girls, just like us, were able to hold on so strong to what they believed in.

“Even in the most horrific conditions, they were not concerned only with their own survival; they were always looking to make other people’s lives as bearable as possible.” 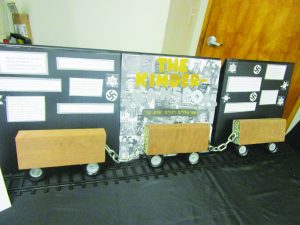 At the exhibit, in addition to the main displays, four additional projects that had been assigned to the students were on display in adjoining areas. In one room, transcripts of interviews that the students had conducted with survivors were available for viewing.

Additionally, each girl composed a poem on a topic related to Churban Europa, and these poems were compiled in a book that guests could take home. Furthermore, time lines, demarcating the various events that transpired during the years of the Holocaust, were displayed in the school’s hallway.

Finally, some of the students created family trees, with an emphasis on where their grandparents or great-grandparents were during the war years, whether in Europe, America, or Eretz Yisrael. These family trees were also on display during the exhibit.

The ninth-graders of Bais Yaakov participated in the exhibit by creating a beautiful and creative sign, depicting “Zeidim helitzuni ad me’od, miToras’cha lo natisi (The insolent ones greatly scoffed at me; I did not turn away from Your Torah)” which decorated the lobby.

Rabbi Chaim S. Gibber, Rosh Kollel of the Minneapolis Community Kollel, spoke during the exhibit. He explained that almost every period of tragedy that occurs to Klal Yisrael is followed by a period of tremendous growth, and indeed, we are currently witnessing that growth.

The girls did a magnificent job with the exhibit, and community members who came to view the exhibit were both extremely moved by the content of the displays, and the talents of the Bais Yaakov students.

As one attendee remarked, “Holocaust education was core to my limited Jewish learning growing up. Now, as a baalas teshuvah, and after visiting with the Bais Yaakov students before, during and following the Holocaust presentation, I realize once again, how much I have yet to learn.

“I feel grateful for the research and effort regarding this tragic time in our history that was shared with me by these capable and wise, young women.”