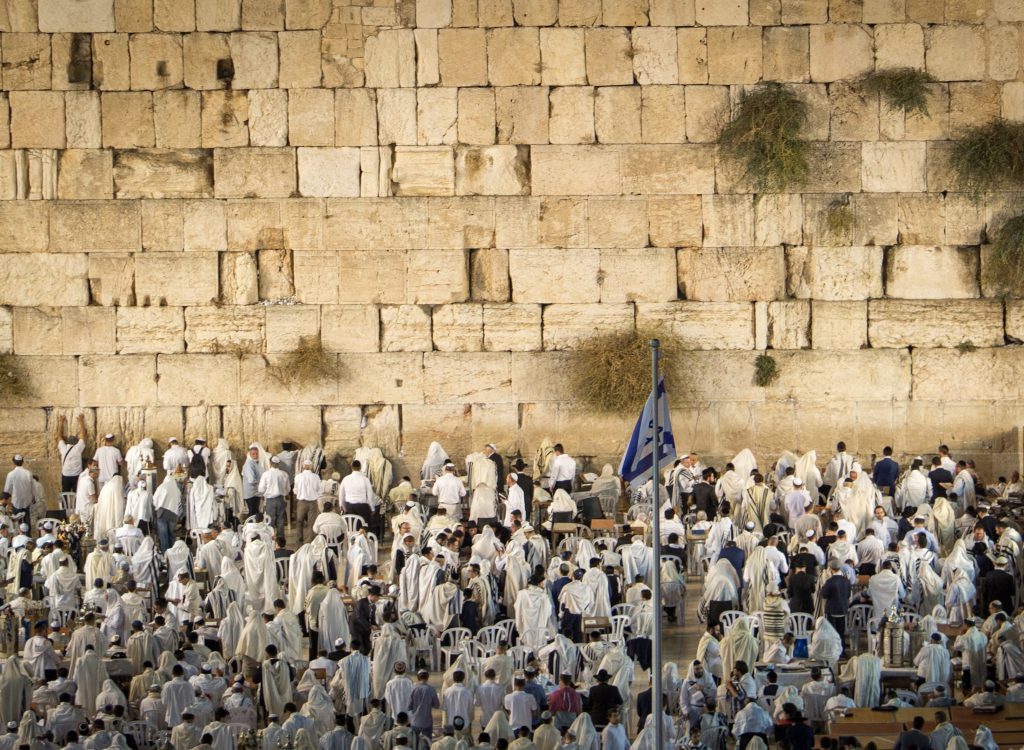 It happened during the visit of the Chief Rabbi of Rechovot, Hagaon Harav Simcha HaCohen Kook, at the summer abode of the Pnei Menachem of Gur in Mr. Carmel in the summer of 1995. The talk between the two Torah scholars turned to the topic of the Western Wall, “from where the Shechinah never budges.” The Pnei Menachem expressed his pain at the lack of modesty, both in dress and behavior, on the part of some of the tourists visiting the holy site. “For me,” he said, “this is precisely that which we say in our prayers, ‘because of the hand that has been thrust into Your Holy Temple.’”

It’s no secret that wherever sanctity is found, that is exactly where impurity seeks to settle in. The Southern Temple Wall area, known as Ezrat Yisrael, stands empty most of the time. Yet the Women of the Wall group refuses to pray there, and would rather defile the area where myriads of Jews stand crowded together, praying and sanctifying G-d’s Name with love.

It’s been over 30 years that this group has been trying to erode the sanctity of the Kosel area and defile the site of the Holy Temple. Thank G-d, they have never yet been allowed control over any spot there, and have remained ineffectual and few in numbers. They continually seek to call attention to their presence, mainly trying to prove that they still exist. Their latest trick is to try to take advantage of the rule that allows any group of 1,000 or more Kosel worshippers to use a loudspeaker for their prayer leader. This would of course mean nothing less than “authorized desecration.”

Rabbi Shmuel Rabinovitch, the Rabbi of the Kosel and the Holy Sites, was not alarmed: “If they have 1,000,” he said, “we have 2,000 and more.” He called out to the great Torah scholars, who stated that all the seminary girls should come to the Kosel to recite the Rosh Chodesh prayers en masse.

The resulting encounter between the two large groups did have a few unpleasant results, including yelling on both sides, pushing, and even a threat upon a Reform clergyman who came to support the fringe women’s group. Of course, the Reform group was able to enlist the media on its side, but perhaps surprisingly, it was actually the police who clarified the situation. They said that the women’s presence in the main prayer plaza was nothing more than a provocation. “You were told from the beginning to pray in Ezrat Yisrael,” the police told them.

“These are just a handful of women,” Rabbi Rabinovitch told Hamodia, “funded by left-wing and Reform organizations abroad. They have no boundaries. They come brazenly to divide the nation and to set one group against another, precisely in the place that unites all the Tribes of Israel.”

“I plan to turn to the Chief Rabbinate Council,” the rabbi said, “with the goal of working towards legislation that would outlaw any disturbance to the prayers at the Western Wall. It is inconceivable that a few dozen extremists can come and disturb such a huge crowd that comes to pray with reverence at the Kosel.”

On what grounds can these women be prevented from praying at the Kosel?

Just like, l’havdil, one does not enter a mosque with shoes on, similarly a woman should not come to the Kosel with tefillin, nor read from the Torah aloud or lead the prayers. The custom at the Kosel is to behave in a certain manner in accordance with Jewish tradition. Those who object to Jewish Law can go home, or to any other wall they happen upon, and perform there whatever strange customs they like.

Let’s not forget that their protests and demands gained them the right to pray at the southern edge of the Western Wall, but they have chosen to let that section remain desolate while they cause provocations at the main Kosel plaza.

They feel that they are Israeli patriots.

We publicized the open secret this week: The heads of the Women of the Wall are members in extremist organizations such as BDS, Sikkui [Jews and Arabs working for “equality”], and Checkpoint Watch. These are women with radical agendas who wish to throw the Jews out of Israel. They are not patriots; they are provocateurs making a lot of noise.

What’s next? How long will these fights go on?

We have no interest in fighting. We only want to protect this site, so precious to us, in its purity and sanctity. They wanted to cause a desecration of G-d’s Name, and we came and sanctified G-d’s Name. Thousands of Jews who tremble at G-d’s word came to pray the Rosh Chodesh prayers at the Kosel, to cry out against those who wish to desecrate the last standing remnant of the Beit Hamikdash, and to plead that G-d speedily reveal His presence to us.