Israel Netanyahu: If Army Radio Can’t Be Fair, It Shouldn’t Be Broadcasting
Israel 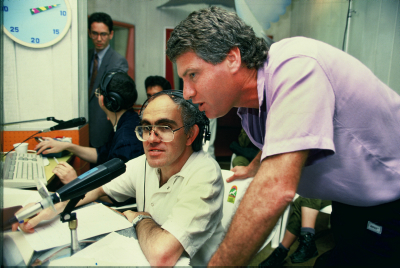 A dust-up over criticism of the Blue and White Party led Prime Minister Binyamin Netanyahu to come to the defense of an Army Radio broadcaster. In a social media message, Netanyahu said that “there is a limit to the dictatorship of thought and the stifling of criticism by the left. We are not in North Korea. If the right isn’t allowed to express itself, Army Radio doesn’t have a right to continue broadcasting.”

Netanyahu made the comments in the wake of a dust-up between Blue and White and Army Radio host Yaakov Berdugo, a consistent critic of party head Benny Gantz, and an outspoken supporter of Netanyahu. Berdugo has been seeking an interview with a top Blue and White official, but the party has refused.

Berdugo has posed numerous questions in his broadcast regarding the past actions of Gantz, especially during Operation Protective Edge. Among the issues he has brought up, for example, is the recommendation Gantz made while he was IDF Chief of Staff at the time against destroying Hamas terror tunnels. Gantz has denied this several times, and Berdugo has demanded that he come on his show and clarify the matter.

The latest round in what has been an ongoing back and forth between the two came on Tuesday, when Blue and White said in a social media message that “every night we are defamed by commentator Yaakov Berdugo. In response to yet another piece of disinformation, we say that we have no reason to be interviewed by him, just as we would not be interviewed on a program in North Korea. Berdugo is the representative of Netanyahu in Army Radio, and is taking advantage of the airwaves to serve his master.”

Responding to the message, Berdugo said on the radio that he had had plenty of criticism for all politicians, including Netanyahu. “Why are they comparing me to a North Korean broadcaster? Because on my show, I ask the questions that need to be asked of a party with three generals who have 117 years total experience in the army, and they refuse to come on my show and answer questions. What do they have to hide? Mr. Gantz, what are you hiding? Come on the show, I promise to ask fair questions and you will answer them. But if you don’t come, we will still not hesitate to ask our questions. This is a democracy.”

In his message of support, Netanyahu said that “on Army Radio there is a host who is not prepared to follow the line of the left and the ‘insiders.’ He is interfering with the regular propaganda for Gantz and Yair Lapid churned out by a host of other Army Radio personalities. They are putting great pressure on Army Radio to fire him. This will not happen,” he added.