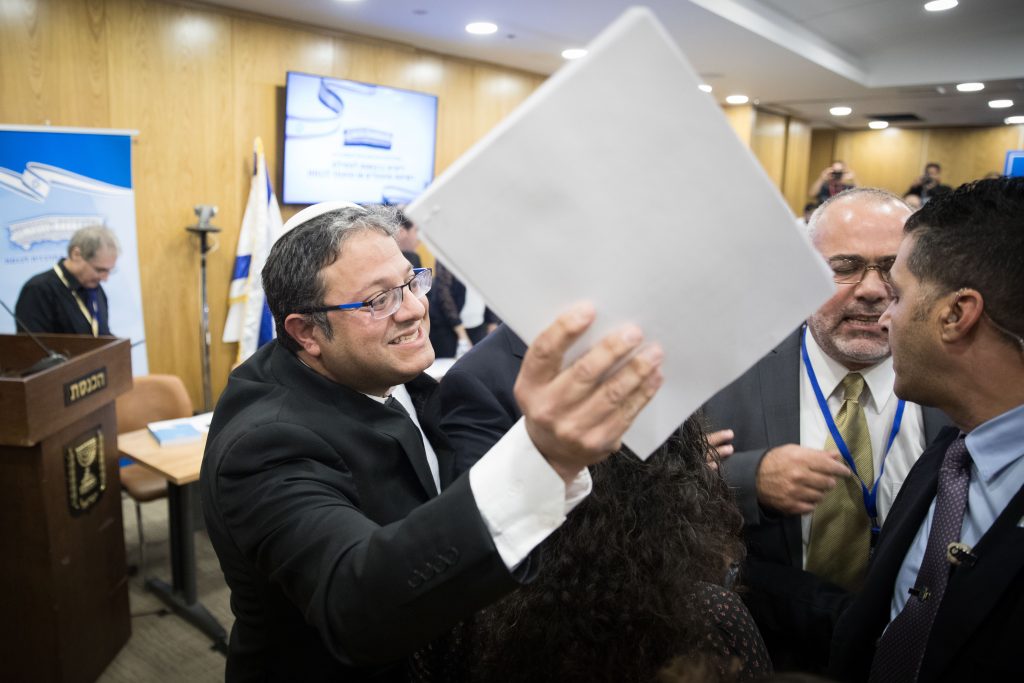 After an acrimonious debate, the Central Elections Commission on Wednesday, approved the candidacy of Otzma Yehudit’s Michael Ben-Ari and Itamar Ben-Gvir for the Knesset, rejecting petitions to disqualify them for allegedly racist positions, and overriding the concurring opinion of Attorney General Avichai Mandelblit.

The committee, which voted 16 to 15 to reject the petition, was split down ideological lines. Members representing right wing parties announced in advance their intention to uphold their right to run for office, which they did; the center-left voted to disqualify them, and a Kulanu MK abstained.

The committee’s decision can still be overruled by the High Court, however, and MK Stav Shaffir (Labor) said afterward that she would appeal the decision.

“We will take care to keep away these violent and inciting racists – Kahane’s successors whose ideas the Likud also compared to the Nazi laws – from the House of Representatives of the only state of the Jewish people,” Shaffir said.

She and Meretz chairwoman Tamar Zandberg had brought the issue to the Elections Committee.

The committee’s session was more a political confrontation than a legal hearing, with various people shouting at each other over the right-left divide.

Issawi Frej, an Arab MK from Meretz, shouted at Ben-Gvir just outside of the hearing room, calling the Otzma candidate a “violent racist.”

“They’re bringing in supporters of [Arab population] transfer into the Knesset on a red carpet,” declared Frej. “If it hadn’t been for racism, there wouldn’t have been a Holocaust.”

In response, Ben-Gvir compared Frej to the pro-Hamas Turkish terrorists who attempted to break the Israeli blockade on Gaza in 2010 on the Mavi Marmara.

“Go back to the Marmara,” Ben-Gvir told Frej.

During the hearing, Ben-Gvir attempted to serve Shaffir notice that he is suing her for calling Otzma’s candidates “Nazis.” Shaffir refused to accept a copy of the lawsuit.

Ben-Gvir filed it with the Yerushalayim Magistrate’s Court, demanding half a million shekels ($138,251) in compensation for her defamation of their party “Nazis.”

“I am the dangerous man that the attorney general thinks cannot be in the Knesset,” said Ben-Ari. “A father of nine children whose son stood on the military parade grounds only 55 minutes ago.”

Ben-Ari called Kahane “my master and teacher,” and rejected accusations of racism. “Those who seek to harm us, their place is in Mecca, but those who are loyal should stay here… I have no problem with Arabs who are loyal to the State of Israel,” said Ben-Ari, who a decade ago served four years in the Knesset.

Ben Gvir described Rabbi Meir Kahane as “a great and wonderful man.” He added, “Those who have raised flags of Palestine and identified with terrorists are enemies of Israel.”

“The embarrassing decision of the Elections Committee is political, and its decision to ignore the position of the attorney general and to save the Kahanists is a disgrace to the Knesset,” Zandberg said.

A panel of seven justices is expected to rule in the coming days on the committee’s decision.

Later, on Wednesday night, it was reported that Shaffir received death threats, and a Knesset security officer was investigating the incident.

Shaffir said she would not be intimidated by Otzma Yehudit followers, whom she blamed for the messages.

Member of the Otzma Yehudit party, Itamar Ben Gvir, at a raucus meeting of the Central Elections Committee on Wednesday.