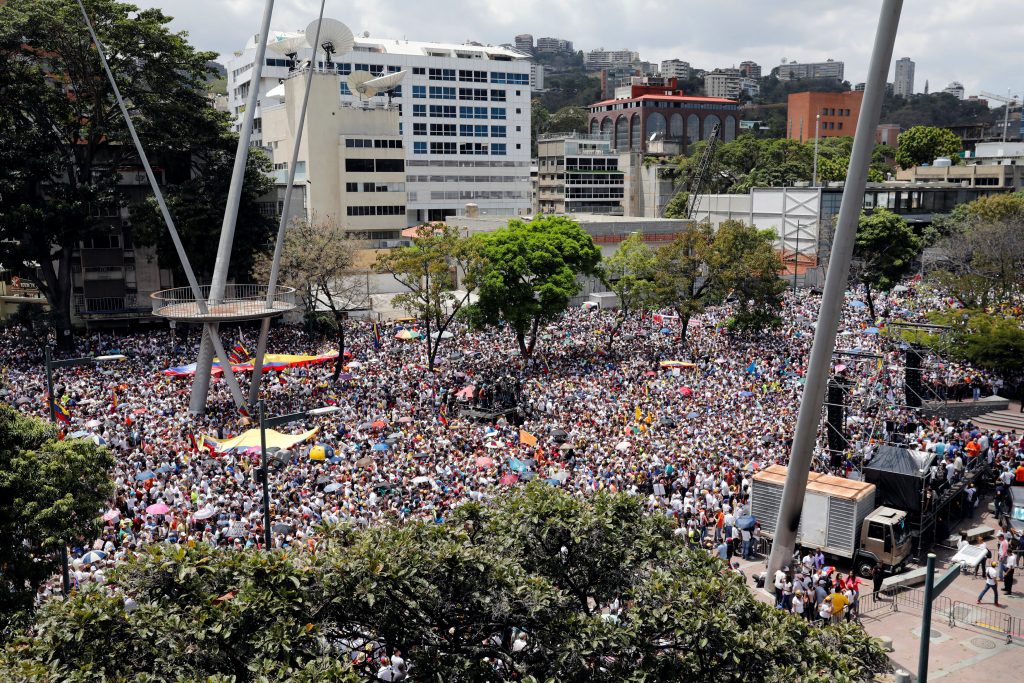 Guaido kept details of his return under wraps and he appeared at Maiquetia International Airport without prior notice, meeting ambassadors for European countries in the arrivals hall, according to witnesses.

He had said he would return to lead protests on Monday and Tuesday, and several hundred opposition supporters had already gathered in Caracas’ Las Mercedes district to await him.

“Back in our beloved country! Venezuela, we just passed through immigration and we will now head to where our people are,” he said on Twitter just after arriving.

His return could become the next flashpoint in his duel with Maduro as he seeks to keep up momentum and spur his international backers to further isolate the socialist government. Most Western countries recognize Guaido as Venezuela’s legitimate head of state.

His possible arrest could allow the opposition to highlight how the Maduro administration represses political foes and prompt the United States to impose even harsher sanctions. But it could also strip the opposition of a public figurehead who has brought unity after years of infighting.

“Upon my arrival, whatever path the dictator takes, we are going to continue,” Guaido said earlier on Monday in a recorded voice message posted on his Twitter account.

Guaido secretly left Venezuela for Colombia, in violation of a Supreme Court order, to coordinate efforts there on Feb. 23 to send humanitarian aid into Venezuela to alleviate widespread shortages of food and medicine.

But troops blocked convoys of aid trucks sent from Colombia and Brazil, leading to clashes that killed at least six people along the Brazilian border, rights groups say.

From Colombia, he traveled to Argentina, Brazil, Ecuador and Paraguay to shore up Latin American support for a transition government that would precede free and fair elections.

On Sunday, he departed by plane from the Ecuadorean coastal town of Salinas but had not appeared publicly since.

Ambassadors from several European countries were at Caracas’ Maiquetia airport. The Spanish ambassador said they had been invited there to receive Guaido.

Maduro, who has called Guaido a coup-mongering U.S. puppet and denies there is a humanitarian crisis in Venezuela, has said his arrest depends on the justice system.

“He can’t just come and go. He will have to face justice, and justice prohibited him from leaving the country,” he told ABC News last week.

Protesters in Caracas, many wearing white and carrying Venezuelan flags, said Guaido’s arrest would spark new protests. “If the regime has even a little bit of conscience, they should not arrest Guaido, because people truly would not put up with it,” said Franklin Lopez, a 60-year-old administrator.