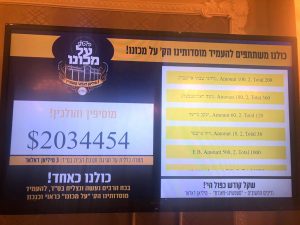 Do the ends justify the means?

That is the question that a number of noted mosdos, based both in the United States and Eretz Yisrael, have found themselves grappling with in recent months.

Breaking under the weight of massive debts incurred by years of huge budget deficits, and desperate to pay back their overdue loans as well as their hard-working staff, they were encouraged by well-meaning friends to launch an online fundraising campaign, which in the past has been successful at raising very large sums of money.

Supporters of this path present some relatively cogent arguments in their favor: While the primary campaign is done online, a phone number is also included in the advertisements, so that anyone who doesn’t want to go online doesn’t have to. Furthermore, since this is all about paying Rebbeim and keeping mosdos from collapsing, why shouldn’t it be considered l’tzorech parnassah?

Yet detractors of the idea have ready responses as well. They point out that most of these very same mosdos have very firm polices in place about internet usage by parents of their students, which include meeting with a special vaad and signing a contract on this issue. While one can offer all kinds of justifications, the core question of what appears to be a glaring inconsistency remains in place.

In preparation for the writing of this article, I had numerous conversations with parents of children attending these mosdos. All of them made it clear to me that while they personally use the internet on a regular basis, and some constantly carry with them a handheld device for this purpose, they still saw an inherent contradiction in the notion of mosdos undertaking this campaign.

“What kind of message is this sending my children?” one father told me. “Nowadays, kids know everything. They know all about these campaigns. Kids don’t split hairs; whether they are right or wrong is debatable, but in their eyes this is hypocrisy.

“You have to realize,” he educated me, “these sites are not built so that someone should make a one-time donation and close his computer. The whole idea is that people should be glued to the screen — or at least visit and refresh often enough — to watch the names of donors pour in and the amount being raised get closer and closer to the goal.”

Another very real concern is that each of these fundraising pages — often adorned with a striking image of one of the Gedolei Yisrael and a letter from him urging support — also includes a direct link to Facebook, one of the most infamous of social media sites.

Is there a viable alternative? Is it possible in 2019 to raise the needed sums a different way? Or must one simply make peace with reality?

That was the question that the Rachmastrivka mosdos in Boro Park — which bli ayin hara have a thousand students — faced in the past few weeks. After a key source of funding was unexpectedly drastically cut nearly three years ago, they were forced to borrow astronomical sums to pay their Rebbeim and teachers. They brought in a team of financial experts who told them that they must raise $3 million to survive, but were they to do so, the deficits going forward would be deemed acceptable.

An online-based campaign that would reach out to individuals outside the kehillah seemed like the only solution, and various innovative safeguards were suggested in order to make it more palatable. Yet after much thought and discussion, worried about the message it would send, the Rabbanim of the kehillah came to the conclusion that, regardless of the outcome, this is not something the Rachmastrivka mosdos should be doing. The hanhalah fully understood, and instead attempted something that had never been tried before.

Last week, more than 500 members of the kehillah gathered in a hall in Brooklyn to hear words of inspiration. On the wall were large screens connected only to laptop computers. The assembled were told that $1 million in matching funds had already been raised, and were asked to be moser nefesh for the purity of the chinuch of their children to raise another million. Each participant then submitted a paper stating his donation — which soon appeared on the large screen, along with his name, or anonymous if desired.

For long, anxious minutes all eyes were on the total sum that showed in large numbers on the screen. The members of the kehillah, many of whom are struggling financially, and many of whom are in kollel or chinuch themselves, gave generously in the past to a building fund, and do their best to pay tuition on time. Could they possibly be expected to donate enough now to reach such a colossal sum?

As the askanim sought to input the donations, numbers began to slowly rise, as did the tension in the room. It was evident that, were this experiment to fail, the ripple effect would be felt throughout the broader community.

After a half hour, the numbers had risen enough that trepidation turned to optimism. It was shortly after the Rachmastrivka Rebbe, shlita, entered the room and took his seat, that the screen showed the number all were waiting for, and a wave of joy swept through the hall.

The message sent out was unmistakable: Never underestimate the depth of a Jewish heart and the mesirus nefesh of parents for the purity of chinuch. And, yes, there is a way to fundraise without an online campaign, even in 2019.