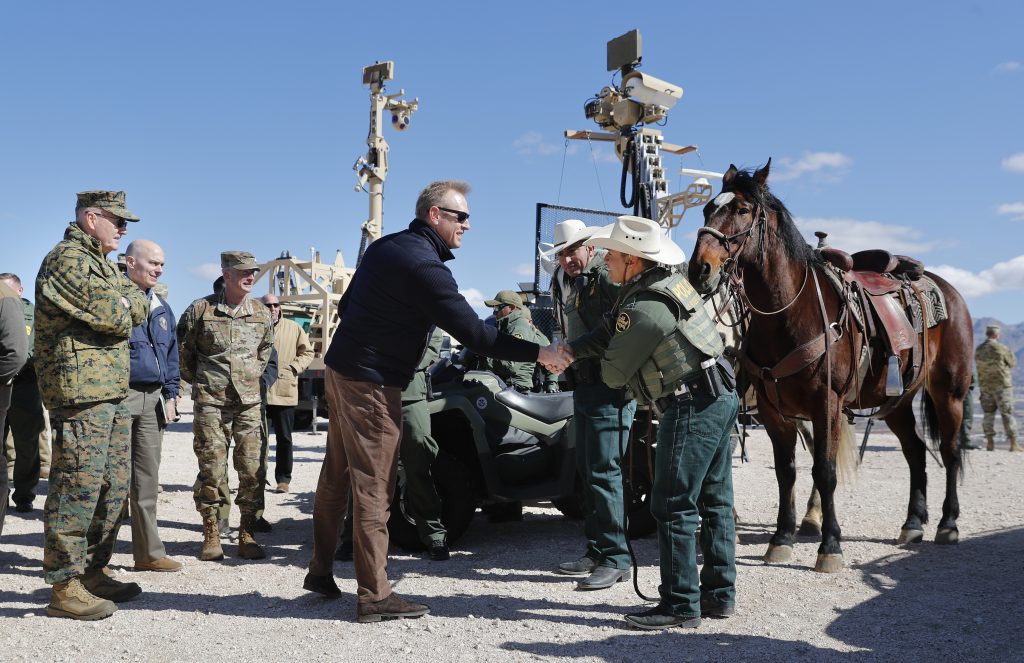 Top defense officials toured sections of the U.S.-Mexico border Saturday to see how the military could reinforce efforts to block drug smuggling and other illegal activity, as the Pentagon weighs diverting billions of dollars for President Donald Trump’s border wall.

Shanahan and Dunford got an up-close look at U.S. Border Patrol vehicles used for surveillance. The Department of Homeland Security has requested Pentagon help in operating about 150 of the vehicle-mounted surveillance cameras, which can see as far as eight miles away.

Shanahan also tried his hand at firing a couple of Border Patrol weapons, including one that fires plastic bullets.

Later, the officials flew over two border control sites farther west. These sites are on a list of high-priority projects DHS submitted to Shanahan on Friday to support its request for money to pay for construction of roads, replacement of vehicle barriers and dilapidated pedestrian fencing, and installation of lighting. The pedestrian fencing would include detection systems that could alert border patrol agents when someone is attempting to damage or break through the fencing. The money would come from the Pentagon’s drug interdiction programs.

One such project proposed by DHS, dubbed “El Paso Project 1,” includes segments of border west of El Paso, in Luna and Dona Ana counties, New Mexico. This is among areas DHS cites as known drug smuggling corridors used by Mexican cartels. Shanahan and Dunford were to fly over this site in a V-22 Osprey aircraft to get an aerial view of the site and to see where DHS resources are inadequate.

These projects are separate from, but related to, those which Shanahan is expected to pay for by diverting money that Congress appropriated for military construction projects. This could total as much as $3.6 billion, although Shanahan has not yet determined that the diversion is justified. His visit Saturday was meant to help him decide whether to approve such spending.

DHS has yet to provide the details that Shanahan says he needs before making his decision on the repurposing of military construction funds. He has said he is likely to provide the full $3.6 billion the White House is expecting, plus $2.5 billion from the drug interdiction program. Trump authorized the use of these military funds when he declared a national emergency to build a wall.

Wall construction would be done under contracts managed by the Army Corps of Engineers, whose commander, Lt. Gen. Todd Semonite, accompanied Shanahan on Saturday. The Corps has built 126 miles of border wall in the last two years — mostly replacement barriers, Semonite told reporters.

Democrats in Congress, meanwhile, are seeking to block Trump’s emergency declaration to stop the diversion of Pentagon funds for his border wall. The House is to vote Tuesday on a resolution to block Trump.

There are about 2,900 active-duty troops and about 2,100 National Guard troops on the border in support of Customs and Border Protection. That combined total of 5,000 is expected to grow to 6,000 by March 1 as the Pentagon provides additional support.

The border mission for active-duty forces began on Oct. 30, 2018, as Trump asserted that caravans of Central American migrants posed an urgent national security threat. Critics dismissed his use of the military on the border as a political gimmick on the eve of midterm congressional elections. The active-duty mission has since been extended to Sept. 30.