General Ahead of Marches Against Anti-Semitisim, Jewish Graves in France Vandalized 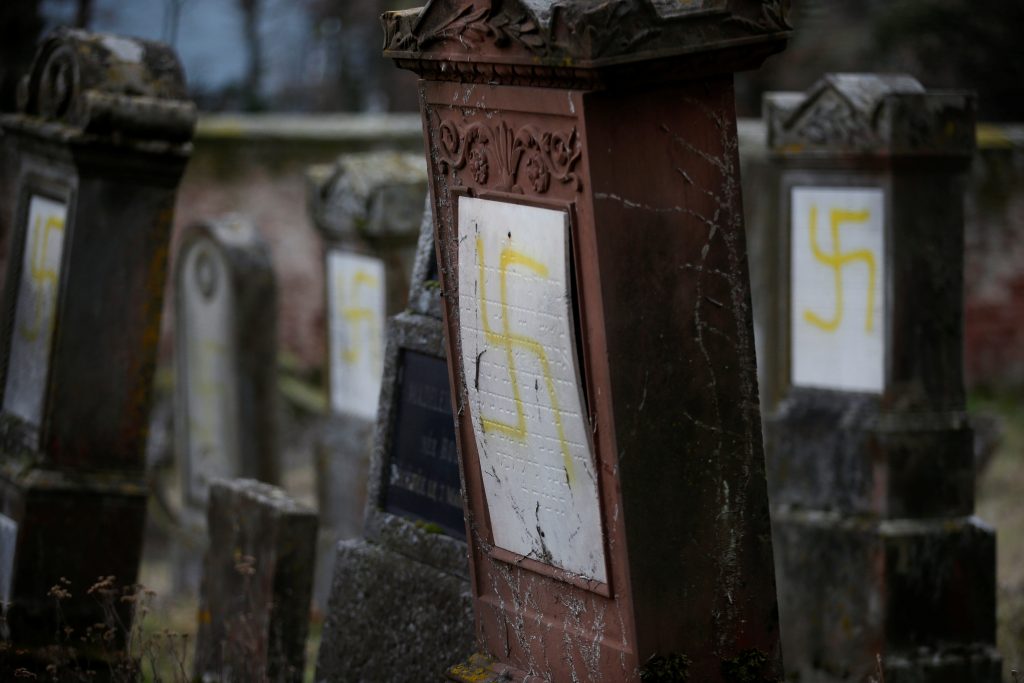 In Paris and dozens of other French cities, ordinary citizens and officials across the political spectrum geared up Tuesday to march and rally against anti-Semitism, following a series of anti-Semitic acts that shocked the nation.

Just hours ahead of Tuesday’s gatherings, French President Emmanuel Macron headed to a Jewish cemetery in a small Alsace town that was vandalized overnight.

Interior Minister Christophe Castaner tweeted his “outrage and disgust” after 80 Jewish graves were vandalized in Quatzenheim. Marie-Helene Schott, secretary at the town’s City Hall, told The Associated Press that swastikas were tagged on several graves.

Photos show the Nazi symbols in blue paint spray-painted on the damaged graves, one of which bears the words “Elsassisches Schwarzen Wolfe” (Black Alsacian Wolves), a separatist group with links to neo-Nazis in the 1970s.

The upsurge in anti-Semitism in France, home to the world’s largest Jewish population outside Israel and the United States, surged last weekend when a torrent of hate speech was directed at prominent philosopher Alain Finkielkraut during a march of yellow-vest anti-government protesters.

The assault came days after the French government reported a big rise in anti-Semitism last year: 541 registered incidents, up 74 percent from 311 in 2017.

Prime Minister Edouard Philippe was to lead government officials at the main rally at Paris’s famed Republic Square. In addition to the marches, National Assembly President Richard Ferrand and the head of Senate, Gerard Larcher, will hold a moment of silence at the Shoah memorial in Paris.

“Every time a French person, because he or she is Jewish, is insulted, threatened — or worse, injured or killed — the whole Republic” is attacked, Macron said at a press conference in Paris after meeting with Georgia’s President Salome Zurabishvili.

Macron is not expected to attend the gathering at the Republic Square, but will deliver a speech at Wednesday’s annual dinner of leading Jewish group CRIF.

“Anti-Semitism is deeply rooted in French society. We would like to think otherwise, but it is a fact,” Philippe told L’Express magazine. “We must be totally determined, I would say almost enraged, in our will to fight, with a clear awareness that this fight is an old one and will last a long time.”