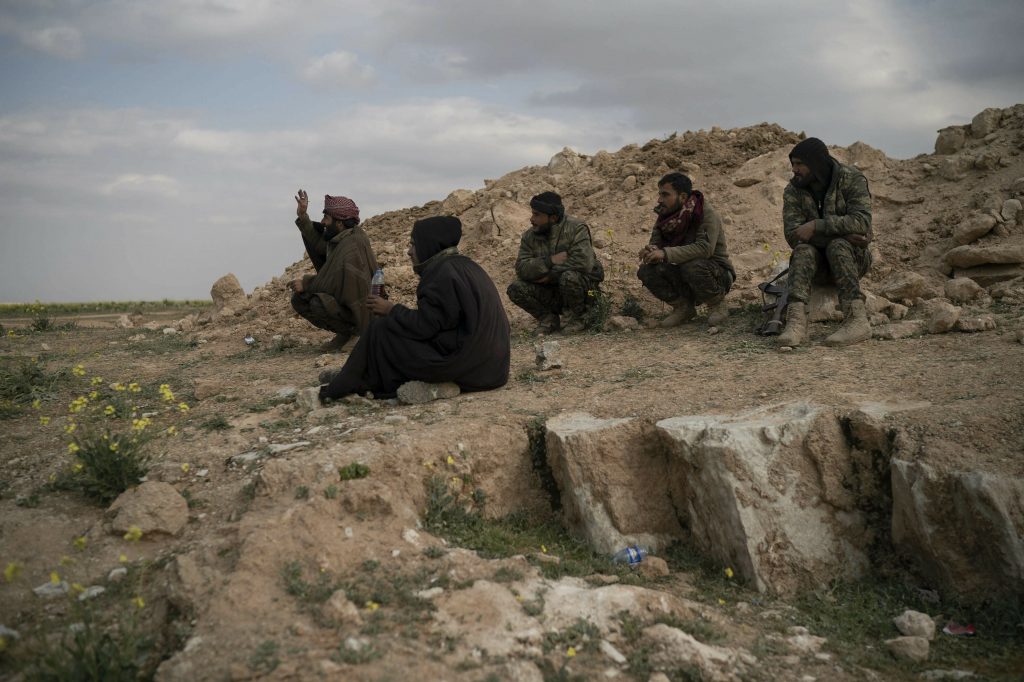 Islamic State group terrorists clung to their last square mile of land in eastern Syria on Thursday with an unknown number of civilians trapped inside, officials said.

U.S.-backed forces conducted precision operations targeting the terrorist’s outposts in and around the village of Baghouz and worked to clear surrounding villages of remaining fighters, officials with the Kurdish-led forces said.

Thousands of people, including many foreign fighters and their families, have emerged from the area in the past few weeks amid ferocious fighting as the U.S.-supported Syrian Democratic Forces closed in from three sides.

They include scores of terrorists who surrendered to the SDF on Wednesday night, but the exodus of civilians has slowed to a trickle in recent days.

“The battle continues but the pace has changed. … There are advances but very slow,” said Mervan, an SDF official who goes by the nickname “the Brave.”

He said SDF operations have focused mainly on the village’s northeast axis, hitting posts held by IS and its cells. He said the terrorists attacked the Kurdish forces the night before, hitting one of their vehicles and killing a number of fighters. The terrorists are using new thermal weapons, he said.

“The forces are moving very slowly. They are not moving heavy weapons, very little unless guided and very precise,” he said. The SDF official said he estimates 300 terrorists remain inside the enclave, and about 1 square mile remains in IS hands.

Ciyager Amed, an SDF official, said it is difficult to differentiate between the terrorists and civilians stilled holed up in Baghouz, citing one reason why the advances have slowed down. Another official said tunnels were still being discovered.

Associated Press journalists standing about a mile outside of Baghouz said it was quiet Thursday. Soldiers were milling about, their guard down as the wind swept through the sandy plateau, dotted with yellow flowers and damp soil from morning showers.

A trickle of civilians came out overnight — the smallest number in weeks — according to one aid worker on site.

A U.S. aid worker outside of Baghouz said they included one Yazidi woman and her children, who had spent four years under IS control. She was whisked away to safety after getting out of the village, he said.

At midday, about a dozen men who had come out of Baghouz, were sitting in a line on the ground in the screening area on a hill, where coalition soldiers were screening them.

Reporters and photographers were not allowed to approach the area or take photos.

The U.S.-led coalition said the SDF was conducting clearing operations of remaining Islamic State who terrorists are hiding among the local population, and detaining others attempting to flee with the civilians.

The capture of Baghouz and nearby areas would mark the end of a devastating four-year global campaign to end the extremist group’s hold on territory in Syria and Iraq, their so-called “caliphate” that at the height of the terrorists group’s power in 2014 controlled nearly a third of both Iraq and Syria.

President Donald Trump has said the group is all but defeated, and announced in December that he would withdraw the 2,000 American forces from Syria.

A coalition official, however, reiterated on Wednesday that IS continues to pose a threat to the security of the region even if their hold on territory is ending.

“While ISIS is on the verge of collapse, and the end of the physical caliphate is at hand it does not signal the end of this campaign,” said U.K. Maj. Gen. Christopher Ghika, using another acronym for IS. “We will pursue them until that threat is eliminated.”

The coalition statement said SDF forces are detaining IS terrorists who are attempting to escape among the civilians fleeing the fighting in Baghouz. Those “arriving to be screened are the wives of ISIS fighters, some of whom sustained gunshot wounds while fleeing from ISIS,” Ghika said.

Amid the exodus of people from the last pocket of territory held by IS, scores of foreign women married to IS terrorists have come out, including French, Canadian and other nationals. They are being held in SDF-run camps in eastern Syria, which have been overwhelmed with newcomers and lacking enough food, water and medical care.

Among those is British teenager Shamima Begum, who ran away from Britain four years ago to join the Islamic State extremists. The 19-year-old was found by The Times newspaper in a refugee camp in northern Syria.

“In the end, I just could not endure anymore,” she said, describing the death from illness and malnutrition of her first two children. “Now all I want to do is come home to Britain.”

In Russia, in the Black Sea resort of Sochi, the leaders of Russia, Turkey and Iran discussed the planned withdrawal of U.S. troops from Syria.

Russian President Vladimir Putin and his Iranian counterpart Hasan Rouhani, both key allies of Syrian President Bashar Assad, said at a news conference that the Syrian government must take over the regions where U.S. troops are currently deployed.

Putin emphasized that if the pullout announced by U.S. President Donald Trump in December happens, “the only right solution will be to transfer those territories under the Syrian government’s control.”

Turkish President Recep Tayyip Erdogan, who has supported Syrian rebels seeking to oust Assad, said the U.S. pullout should not lead to a “power vacuum” and reaffirmed Turkey’s intention to create a “safe zone” in northeastern Syria to secure the Turkish border from the Syrian Kurdish militia that Ankara calls “terrorists.”

The three leaders also said they have agreed on the need to take further steps to stabilize Syria’s northern Idlib province and counter attempts by al-Qaida-linked terrorists to expand their sway.

In September, Russia and Turkey struck a de-escalation deal on Idlib that averted a Syrian army offensive on the last remaining rebel stronghold.