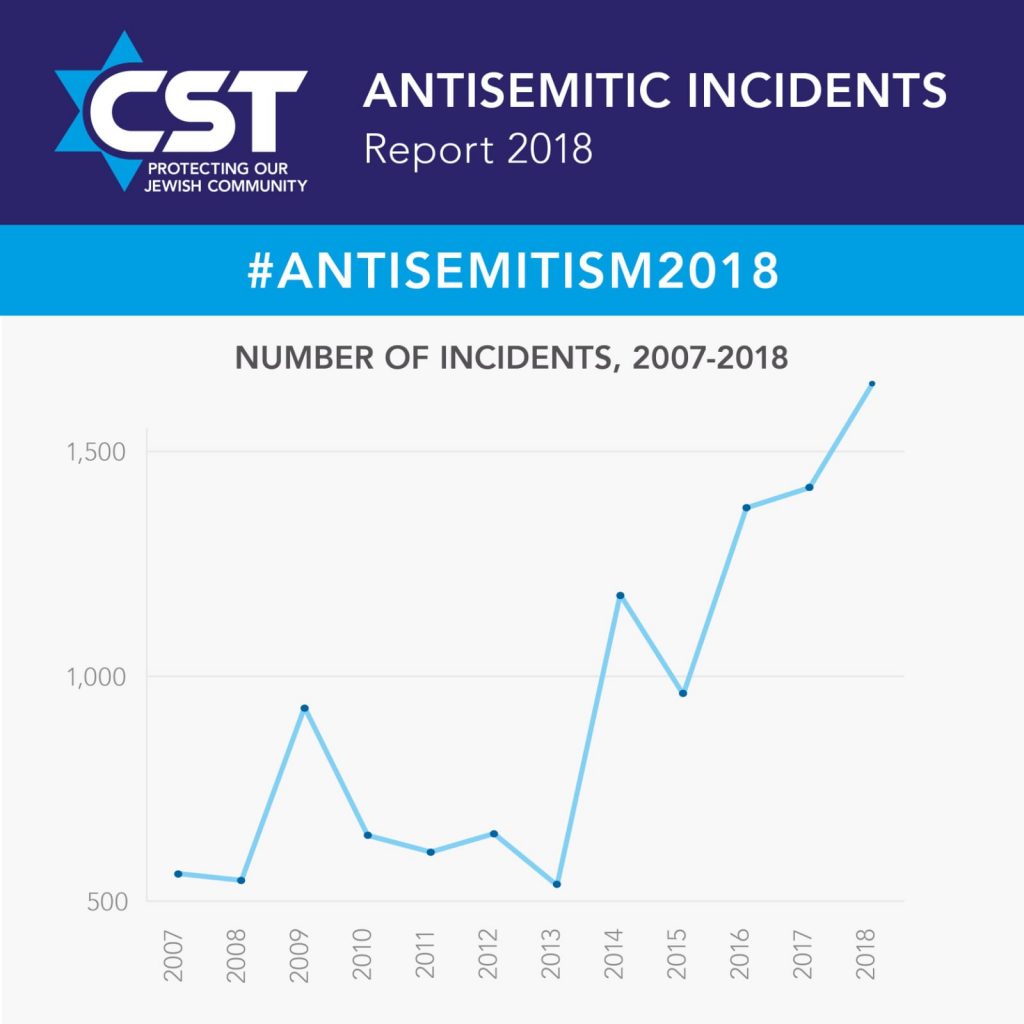 The number of anti-Semitic hate incidents recorded in the U.K. rose by 16 percent in 2018, making 2018 the third year in a row to see a record total of anti-Semitic incidents, according to figures released this week by the Community Security Trust (CST).

CST recorded over 100 anti-Semitic incidents in every month of 2018, the first time this has ever happened in a single calendar year. Looking over a longer period, CST has now recorded over 100 anti-Semitic incidents in all but five months since January 2016; this only occurred on six occasions in the decade prior to 2016. This pattern of consistently high incident totals suggests an enduring situation in which people with anti-Semitic attitudes appear to be more confident to express their views, while incident victims and reporters may be more motivated to report the anti-Semitism they experience or encounter.

The highest monthly totals in 2018 came in May, with 182 incidents; April, with 151 incidents; August, with 150 incidents; and September, with 148 incidents. It is likely that these higher monthly totals were partly caused by reactions to political events in the U.K. and overseas, involving the Labour Party and violence on the border of Israel and Gaza, during those months.

The most common single type of incident recorded by CST in 2018 involved verbal abuse randomly directed at visibly Jewish people in public. In 483 incidents, the victims were Jewish people, male or female, attacked or abused while going about their daily business in public places. In at least 224 incidents, the victims were visibly Jewish, usually due to their religious or traditional clothing, school uniform or jewelry bearing Jewish symbols. A total of 724 incidents involved verbal anti-Semitic abuse.

CST recorded a 17 percent decrease in the number of violent anti-Semitic assaults, from 149 in 2017 to 123 in 2018. There were 78 incidents of damage and desecration of Jewish property in 2018; 1,300 incidents of abusive behavior; 109 direct anti-Semitic threats; and 42 cases of mass-mailed anti-Semitic leaflets or emails.