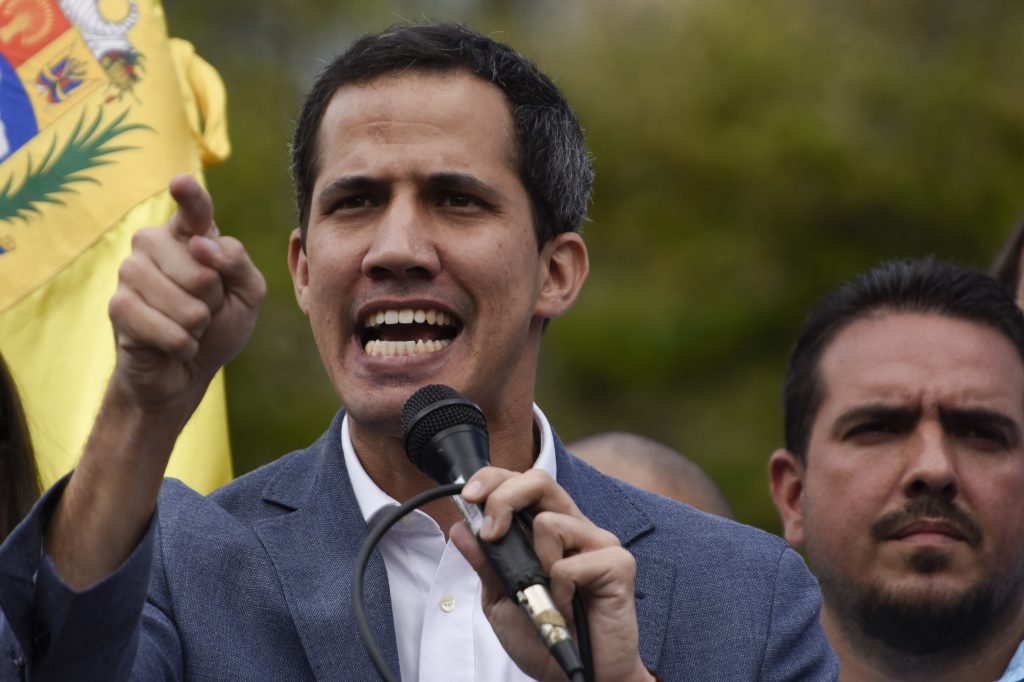 The Venezuelan opposition is in talks with sympathetic military and civilian officials in a bid to force out President Nicolás Maduro, self-proclaimed interim president Juan Guaido said in an interview Sunday with The Washington Post.

Backed by the United States and a host of Latin American countries, Guaido also said the opposition will test the socialist government by bringing in food aid to ease a crippling humanitarian crisis.

Guaido and his opposition are locked in a high-stakes power play to wrest Maduro from power. In Caracas, Maduro’s top brass and defense minister have sworn their allegiance to him.

The new head of Venezuela’s democratically elected National Assembly, a body stripped of its power by Maduro in 2017 but still recognized internationally, Guaido has argued that Maduro is illegitimate and must leave power after elections last year that were widely derided as fraudulent. Virtually unknown outside of Venezuela before this month, the 35-year-old industrial engineer proclaimed himself interim president last week.

Guaido told The Post that talks with the military were proceeding behind the scenes. He also hailed a move on Saturday by Maduro’s former military attache in Washington to switch allegiance to Guaido.

“We have been in talks with government officials, civilian and military men,” Guaido said. “This is a very delicate subject involving personal security. We are meeting with them but discreetly.”

Antonio Rivero, a Venezuelan general in exile in Miami, said he has spoken with high, middle and lower military officials who dissent against Maduro but remain fearful of a full break.

“Many soldiers are desperate,” Rivero said. “The armed forces are broken already.”

In the eastern slum of Petare, anti-Maduro residents approached National Guard stations to hand out fliers with an amnesty pledge to encourage the drab-clad guards to turn against Maduro. One guard burned the paper as they shouted, “Soldier, my friend, you’re the only one missing.”

The crowd had met early and had bought the guards baked goods for breakfast, hoping for a most positive response.

As Guaido seeks to establish a transition government with an international network, he said he was in the process of naming “foreign representatives.” Carlos Vecchio, an exiled Venezuelan opposition leader living in South Florida was already “exerting responsibilities” in the United States, he said. Guaido said that ahead of his proclamation as president, he had met or spoken with several U.S. senators, including Sen. Richard Durbin, D-Ill., Sen. Marco Rubio, R-Fla., and Sen. Robert Menendez, D-N.J.

The history of U.S. military involvement in Latin America has raised questions about whether the White House would direct a military intervention to oust Maduro. President Donald Trump has said “all options” are on the table, while defense officials have sought to tamp down speculation that the Pentagon could become involved.

“This is the U.S. supporting the people of Venezuela, who want their constitution and democracy followed,” he said. “That’s a fact.”

U.S. officials, however, have openly called for Maduro’s departure. Secretary of State Mike Pompeo has additionally called on the Venezuelan military to stand on the side of “democracy,” while Vice President Mike Pence has issued a video that supports anti-Maduro street protests.

The United States last week ordered the departure of nonemergency personnel from Venezuela but has said the embassy would remain open with a skeleton crew. In an interview with CNN Turk broadcast on Sunday, Maduro confirmed that a small number of U.S. diplomats were still in Caracas.

“I have authorized a small group to remain, to carry out the negotiations that will take place during 30 days for the establishment of an interests office,” Maduro said. “We do not have diplomatic and political relations with them. I broke them.”

Maduro lashed out at European powers that have given him eight days, starting Saturday, to call new elections. If he doesn’t, they have threatened to recognize Guaido.

“They must withdraw this ultimatum. Nobody can give us an ultimatum,” Maduro told the network.

Guaido told The Post that the opposition was preparing to challenge the government’s authority by bringing food aid into the country, aid made possible by a $20 million pledge from the United States, as well as offers from Colombia, Brazil, Argentina, Paraguay and the European Union. Maduro has largely blocked aid in the past, claiming that rapidly spreading hunger and disease in Venezuela is a fiction invented by his enemies.

“Humanitarian aid is the center of our policy, and we are working on the logistics,” he said. “We believe this will be a new dilemma for the regime and the Armed Forces. They’ll have to decide if they’re on the side of the people and want to heal the country, or if they will ignore it. I believe we’re going to achieve it. They’re going to let it in.”

He said his challenge to Maduro is in an early, sensitive phase. He said “many elements need to be solved” before he would seek new elections. He suggested it would take six to nine months to do so if Maduro steps down and the electoral system could be rapidly purged of corruption.

Guaido credited foreign backing for the government’s restraint in dealing with him. Though he was briefly detained earlier this month, Maduro’s government has treaded relatively lightly; it has arrested, charged or driven into exile other opposition leaders.

Guaido’s growing recognition has placed practical burdens on his fledgling transitional government, including how to pay for embassy rents and staffing in countries where he is viewed as Venezuela’s emergency leader. The opposition has said Guaido is partly counting on Venezuelan assets frozen by the United States, which the Trump administration has pledged to put at his disposal to carry out diplomacy and governance.

Guaido said the fledging transitional government seeks to take control of Citgo, the U.S. oil company wholly owned by the Venezuelan state via American subsidiaries, but suggested it might take time. Influential Venezuelan exiles were calling on the Trump administration to take steps that could secure Citgo as a source of revenue for Guaido’s transitional government.

“Nothing will signal Mr. Maduro more pointedly than the loss of control over foreign assets,” said Pedro Burelli, former member of the board of directors of Venezuela’s state oil company, PDVSA, which owns Citgo.

“Other than liquid assets owned by an array of public entities, control of Citgo would be a game changer,” he said.