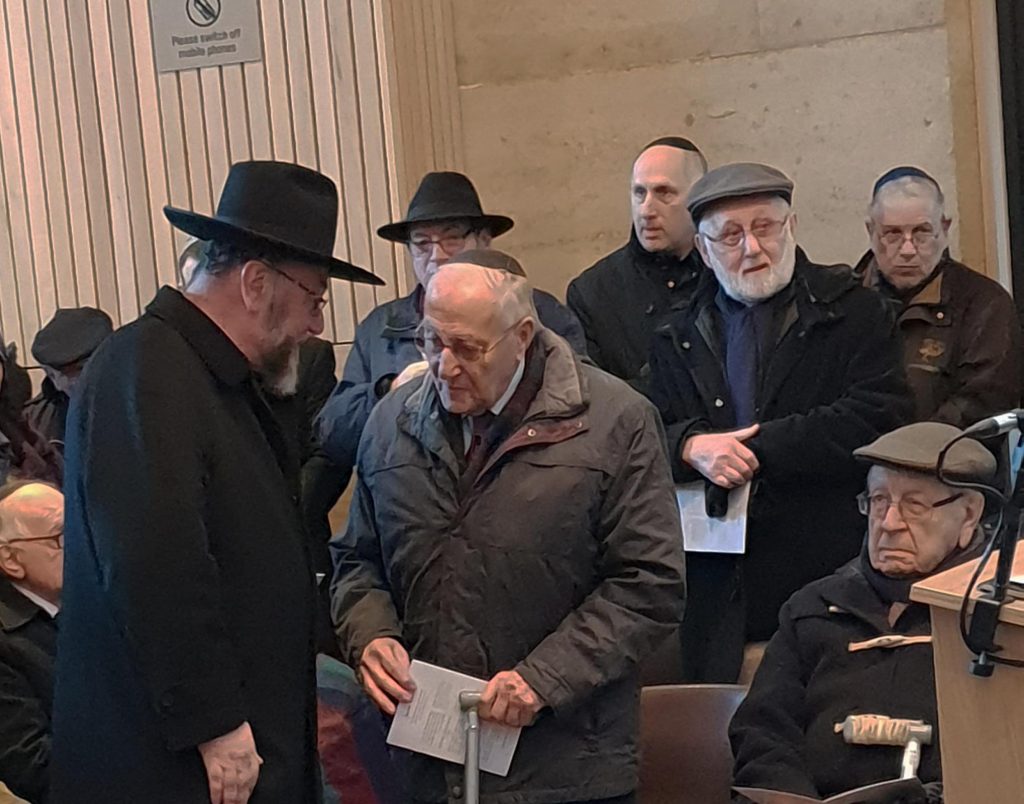 A moving levayah took place Sunday morning at the United Synagogue’s Bushey New Cemetery, for six victims of the Holocaust, Hy”d, whose remains had been in the keeping of the Imperial War Museum.

Around 1,200 people packed into the main hall of the cemetery, with screens provided in overflow rooms, to hear Chief Rabbi Ephraim Mirvis eulogize the departed.

Holocaust survivors were given seating at the front and one of the most moving moments of the levayah occurred at the beginning when they were invited to step outside and accompany the small single coffin into the hall. The remains had been handed over to the Jewish community in a private ceremony held at the Imperial War Museum (IWM) on Wednesday, following which they were taken to Bushey Cemetery where they were kept in the mortuary until the levayah.

Rabbi Nosson Shlomo Liss, Rav of Highgate Synagogue, and chairman of the Rabbinical Council of the United Synagogue, began the levayah, during which Dayan Menachem Gelley, Rosh Beis Din of the London Beth Din and Dayan Ivan Binstock, led the tefillos. Dayan Binstock read a kinnah which had been especially written for the occasion.

Chief Rabbi Mirvis gave a moving hesped, during which he addressed the meisim directly. He called on the assembly to pledge as Jews to strengthen their commitment to Yiddishkeit, and to increase in learning and performing mitzvos, and also urged that everyone present should join together to stamp out hatred, wherever we find it.

The gathering included Lord Lieutenant Robert Voss CBE, as the official representative of HM The Queen; HE Mark Regev, Israeli Ambassador to the U.K.;  Minister for Communities James Brokenshire, representing the Prime Minister; Cardinal Vincent Nichols, representing the Catholic Church; Lord Eric Pickles, the Special Envoy for post-Holocaust issues, and many other representatives of government, religious organisations, Holocaust organizations and Rabbanim. A delegation from the IWM was also present.

Following the service, the coffin was escorted outside for kevurah, where again, those survivors who wished to do so were prioritized in placing earth into the grave, followed by many other people. The Chief Rabbi recited tefillos and a large proportion of the assembly said Kaddish together.

Hamodia spoke to Rebbetzin Bella Abraham, whose parents were both Holocaust survivors. She said, “I think this is a communal levayah. This is a levayah for Klal Yisrael and I think it’s very important that people should be here. I’ve brought my teenaged daughter for that reason.

“My father lost six siblings, four of them married with children, and his parents, in Auschwitz. There is a possibility that these people could be family!”