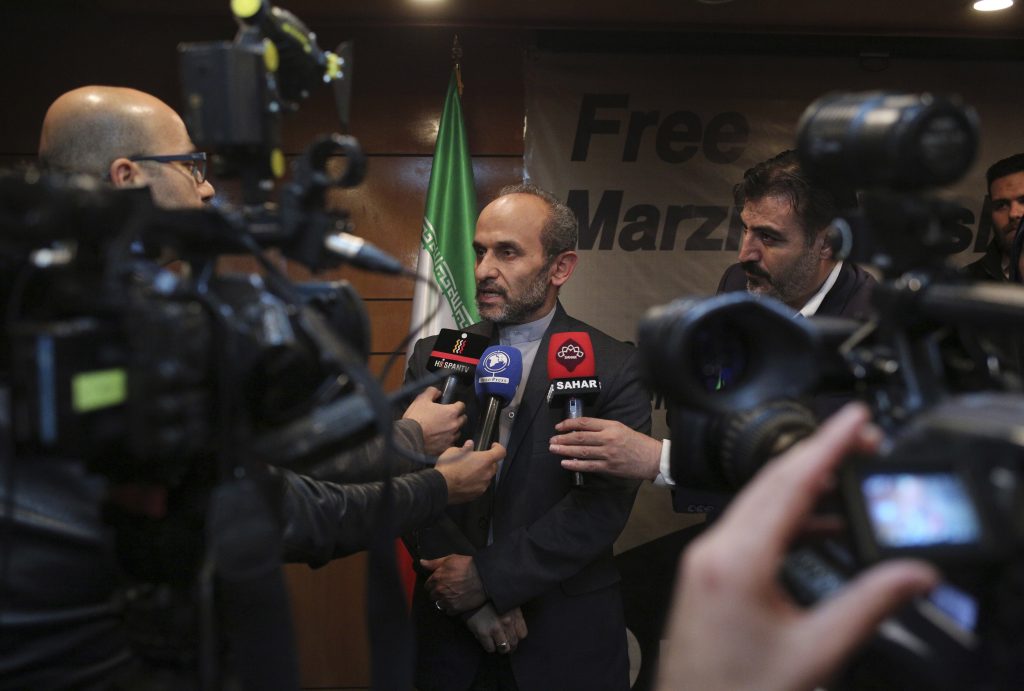 Iran on Wednesday called for the immediate release of an American-born journalist arrested in the United States while working for Iran’s English-language state television, accusing Washington of mistreating her in jail as a black Muslim woman.

Iran’s English-language Press TV said earlier Wednesday that Marziyeh Hashemi, its anchor and documentary film maker, was arrested at St. Louis Lambert International Airport on Sunday and was being held in Washington. She has not been formally charged.

“We condemn the illegal arrest of Marziyeh Hashemi, the reporter and presenter of Press TV, and the inhuman treatment of her in jail in Washington,” Iranian foreign ministry spokesman Bahram Qasemi was quoted as saying by state news agency IRNA.

Iranian Foreign Minister Mohammad Javad Zarif also said that the arrest was “unacceptable” and called on Washington to end “this political game.”

Zarif was quoted as saying by ISNA news agency that Hashemi’s husband was Iranian so she had been granted Iranian citizenship.

Press TV said in a statement on its website that Hashemi “a mother and a grandmother … has traveled to the United States to visit her family members, including her brother, who is suffering from cancer.”

She was allowed to call her daughter two days after her arrest, the broadcaster said.

According to Iranian reports, Hashemi was born Melanie Franklin in the United States and changed her name after converting to Islam.

She was quoted as saying that she had been prevented from wearing a hijab, a head covering worn in public by some Muslim women, in prison, and was only offered meat that is prohibited in Islam law to eat.

The only food she has had over the past two days has been a “packet of crackers,” Hashemi was quoted as saying.

Reuters could not independently verify the account of her treatment.

“The sudden arrest of an American Muslim woman, and inhuman and disrespectful behavior of U.S. federal officers with her is a clear example of how an apartheid regime treats its non-white citizens,” Qasemi said.

Hashemi has lived in Iran for more than a decade, according to various Iranian media.

She has reported on the subject of discrimination against women, Muslims, and African-Americans in the United States.