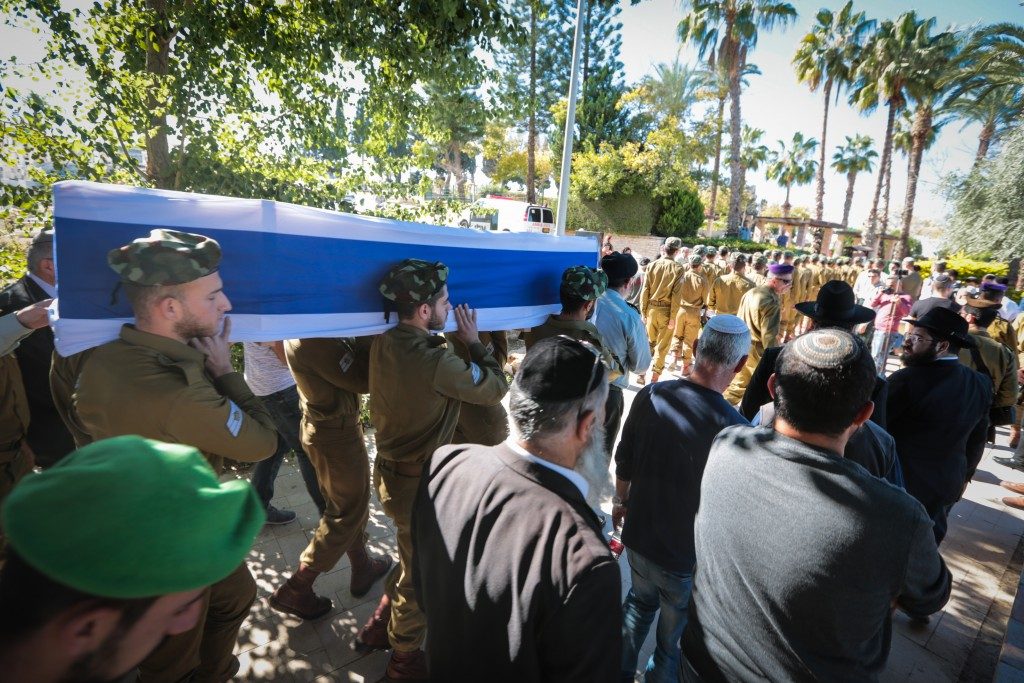 Barghouti comes from a family that has “distinguished” itself in terrorism. His father and uncle and cousins have all done lengthy prison time, while his brother, Salah, was killed recently while resisting arrest for his role in shooting and critically wounding Shira Ish-Ram and murdering her unborn baby earlier last month in Ofra. His most notorious relative, of course, is Marwan, a former Tanzim leader who has spent more than half his life in prison for his role in five murders, with no hope of gaining release.

Assem Barghouti himself has done 11 years in prison for terrorism — he was released less than a year ago — which raises an obvious question: If he knows from personal experience and from the experience of so many close family members that engaging in terrorism will land him in prison, why does he persist?

The answer is equally obvious: Because prison is not a deterrent for terrorists; the conditions are too good.

Hamodia’s military correspondent A. Pe’er was recently given a guided tour of a security prison. It housed some of the heaviest hitters, names that are well known on the Palestinian street and to the security authorities. His tour guide, a veteran prison guard, made an observation that Pe’er found chilling: “They live here like in a rest and recreation facility, is it any wonder that they yearn to return?”

Not only are the conditions deluxe, with generous family visitation rights, the opportunity to earn university degrees through correspondence courses and newspapers and other forms of entertainment, but the pay is better than anything they could earn on the outside.

After his trial and expected conviction, Barghouti will be paid a monthly “salary” of NIS 6,000 that will increase to NIS 12,000 as he gains seniority behind bars.

According to Itamar Marcus and Maurice Hirsch of Palestinian Media Watch, Barghouti’s starting “salary” is higher than most other terrorist prisoners, since he has already spent 11 years in prison. During his first term, he received an estimated cumulative sum of NIS 447,000.

Additionally, according to PA law and regulations, upon his release less than a year ago, Barghouti was also entitled to a $6,000 one-time release grant and a guaranteed salary paid by the PA, even if he did not work.

The Palestinian Authority, which can’t afford to improve education and healthcare, has plenty of money for terrorism. For instance, Amjad and Hakim Awad, who in March 2011 murdered the five members of the Fogel family, Hy”d — the parents and three children, including three-month-old Hadas, have already cumulatively received NIS 460,800; Abdullah Barghouti, who made the bomb used to blow up the Sbarro pizza shop in Yerushalayim in August 2001, murdering 15 people, including two year-old Hemda Schijveschuurder, has already received NIS 695,200.

Much of the world is willing to ignore the Palestinian Authority’s immoral “pay for slay” policy. Instead of demanding accountability and transparency, the international community looks the other way when the PA spends nearly half its foreign aid on the murder of Jews.

Under U.S. President Donald Trump, the United States has taken a principled stand. The president signed a law in 2018 cutting most aid to the Palestinians until they end stipends to terrorists and the families of slain attackers. The Taylor Force Act, named after a former U.S. army officer who was stabbed to death by a Palestinian terrorist while visiting Tel Aviv, halts funding to the Palestinian Authority until Ramallah stops issuing such payments.

Unfortunately, the Trump administration is the exception. There are governments and powerful political groups around the world who see no need to remind the Palestinians that their right to be granted statehood is conditional on responsible, transparent behavior that is in keeping with international norms.

In Australia, for instance, the Labor Party recently passed a motion at its national conference that “calls on the next Labor government to recognize Palestine as a state.” The mere statement of intent signals to the Palestinians that they have no need to change.

“The PA not only promulgates the hatred of Jews, it also rewards those who killed them,” wrote Danny Eisen, cofounder of the Canadian Coalition Against Terror, and Sheryl Saperia, director of policy at the Foundation for Defense of Democracies, in an opinion piece in The Australian.

The article adds that payments to the families of “some 6,000 Palestinians convicted of terrorist crimes or killed or wounded in the commission of terrorist attacks … are mandated by official PA policy, and Ramallahs’ 2018 budget publicly lists $335 million for this purpose.”

The facts presented by Eisen and Saperia are important and must be addressed by the Australian Labor Party and any other official group promising to recognize the sovereign state of Palestine.