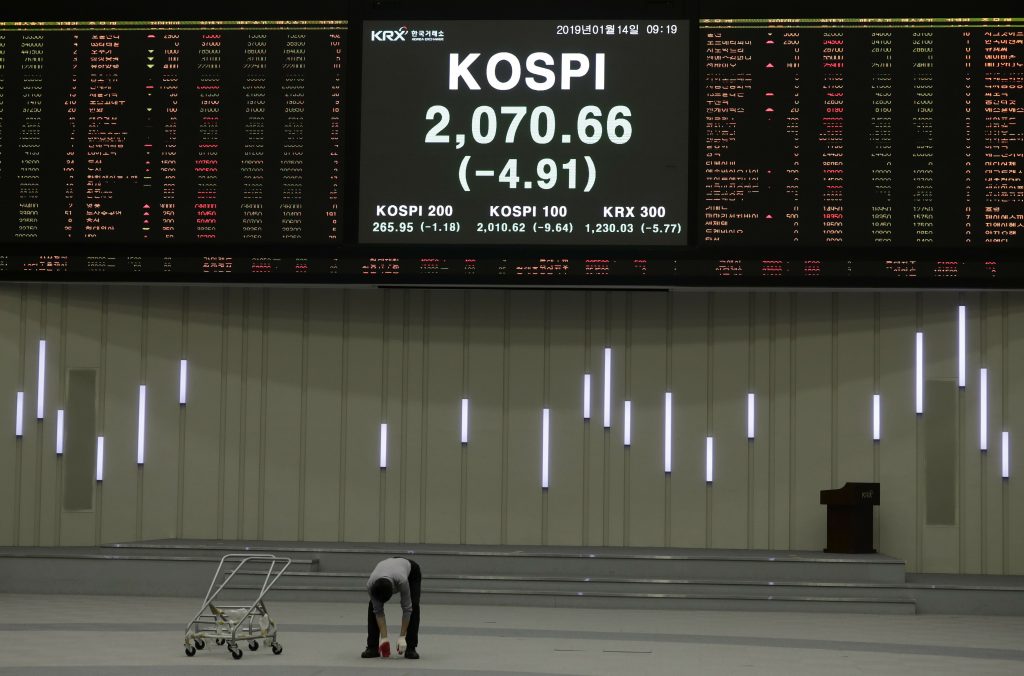 Asian shares and U.S. stock futures skidded on Monday after a shock contraction in Chinese exports pointed to deepening cracks in the world’s second-biggest economy and raised fears of a sharper slowdown in global growth and corporate profits.

E-minis for the S&P 500 declined 0.8 percent, in an indication of heightened risk aversion. Spreadbetters also pointed to a weak start for Europe while FTSE futures slipped 0.4 percent.

The disappointing numbers reinforced fears that U.S. tariffs on Chinese goods were starting to take a heavy toll on China’s cooling economy. Softening demand in China is already being felt around the world, with slowing sales of goods ranging from iPhones to automobiles, prompting profit warnings from the likes of Apple and Jaguar Land Rover.

The Australian dollar, a key gauge of global risk sentiment and a liquid proxy for the Chinese yuan, toppled from Friday’s one-month peak of $0.7235 to $0.7186 after the dismal data.

“We believe trade growth next year will slow significantly on huge uncertainty and high base,” Citi analysts wrote in a note, predicting China’s exports and imports to fall 5.1 percent and 6.8 percent respectively this year.

“Significant uncertainty remains as to whether there could be a ‘deal’ after March 1,” they added.

Liquidity was generally light during Asian hours as Japan was on public holiday.

Some analysts expect Monday’s trade data to provide impetus to Chinese authorities to resolve the trade dispute with Washington.

“You could argue that the worse the numbers are, the more incentive it provides to resolve the dispute,” Ray Attrill, forex strategist at National Australia Bank, told Reuters.

“It also amplifies the extent to which they (Chinese policymakers) have to provide stimulus for the domestic economy,” Attrill added.

The world’s two largest economies have been in talks for months now to try and resolve their bitter trade war, with no signs so far of any substantial progress in negotiations.

Citi analysts said even with the rising probability for both sides to reach an agreement, the tariff and trade disruption appears to have already rippled through the global economy.

“The regional trade growth appears to have slowed substantially after front-loading effect diminished,” they said.

In the wake of the trade dispute, China’s policymakers have already pledged to step up support this year, following a raft of measures in 2018, including fast-tracking infrastructure projects and cuts in banks’ reserve requirements and taxes.

On the earnings front, U.S. banks are in sharp focus with quarterly results from Citigroup due Monday followed by JPMorgan Chase, Wells Fargo, Goldman Sachs and Morgan Stanley later in the week.

Expectations are dour with profits for U.S. companies forecast to rise 6.4 percent, down from an Oct. 1 estimate of 10.2 percent and a big drop from 2018’s tax cut-fueled gain of more than 20 percent.

Investor attention was also on the U.S. government shutdown, now in its 24th day, and with no resolution in sight.

Further clouding the outlook, Britain faces a hugely uncertain path with a vote for a deal for its exit from the European Union due in the U.K. Parliament on Tuesday.

All these factors were at play last week when the main U.S. indices ended Friday little changed as investors reset positions ahead of key risk events.

In currencies, the euro was subdued as it hit key technical levels following data from Italy on Friday that showed the euro zone’s third-largest economy was at risk of recession.

The dollar’s index, which measures the greenback against a basket of major currencies, edged 0.1 percent lower to 95.57 after two straight days of gains.

In commodities, oil prices extended losses from Friday as investors worried about a global slowdown.