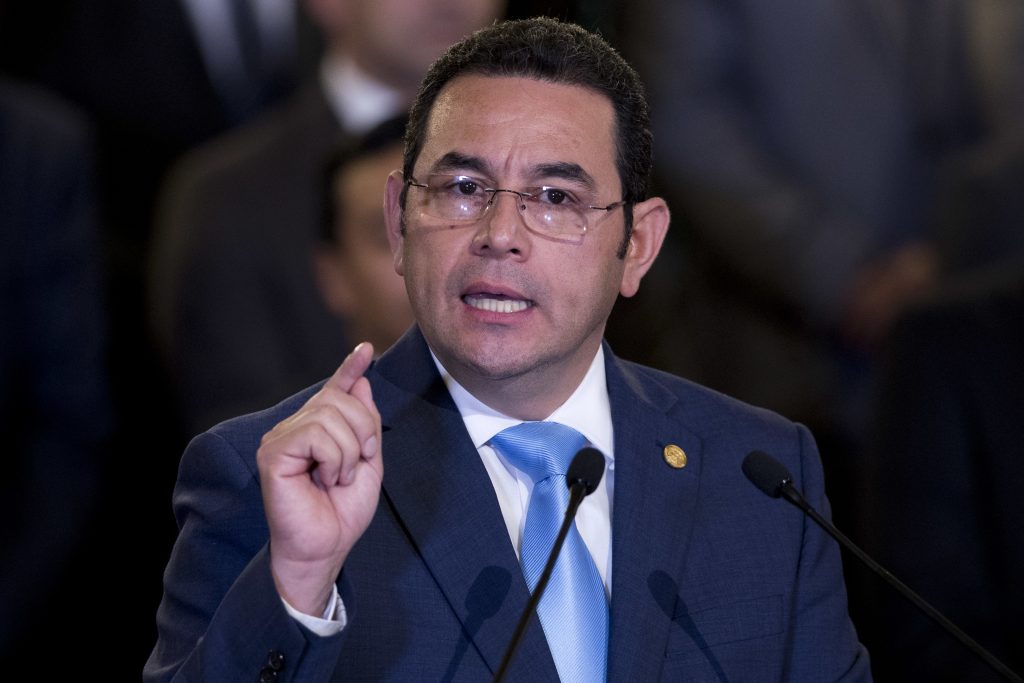 The last time a Guatemalan president tried to cut off a United Nations-backed anti-corruption commission that was investigating him, the United States quickly intervened.

In 2015, Vice President Joe Biden flew to Guatemala to meet with then-President Otto Perez Molina, who was accused of being part of a customs corruption scheme. Biden threatened to withdraw U.S. aid from Guatemala if Perez refused to extend the two-year mandate of the commission, which the U.S. funded and viewed as a successful crime-reduction model that could be replicated around the world.

But last week, when current President Jimmy Morales abruptly expelled the commission while it was in the middle of investigating him for illicit campaign financing accusations, the Trump administration wavered.

While Canada, Germany and the European Union have fiercely condemned the commission’s expulsion, an act that defied rulings from the country’s highest court, the U.S. offered a four-sentence statement from the State Department that expressed vague support for Guatemala’s anti-corruption efforts but didn’t mention the commission at all.

“The U.S. has maintained an ambivalent attitude,” said Helen Mack, a Guatemalan human rights advocate who supports the International Commission Against Impunity in Guatemala, known as CICIG. “The whole world is asking: ‘Where are they?’”

The feeble U.S. response may be linked to multiple factors.

For one, Guatemala has gone to lengths to curry favor among Washington conservatives in recent years. The Central American nation was one of only a handful of countries worldwide to follow the U.S. in moving its Israeli embassy from Tel Aviv to Jerusalem last year. Since 2017, the year the CICIG opened its investigation into Morales, Guatemala’s government and business leaders had contracts worth at least $2 million with D.C. lobbyists, according to U.S. government documents.

At the same time, criticism of the CICIG has been growing among Republican lawmakers who are angry about its investigation into a Russian family that obtained false passports from a Guatemalan crime ring. After a prominent critic of the Russian government questioned whether the CICIG had acted at the behest of Russian President Vladimir Putin, U.S. Sen. Marco Rubio, R-Fla., announced a hold on $6 million in funding for the commission until questions about the incident were addressed, helping strengthen claims by President Morales that the commission was politically motivated and violated Guatemalan sovereignty.

On Tuesday, Rubio tweeted his support for the Guatemalan government’s decision to expel the CICIG.

“I’ve had concerns about CICIG’s abuse of power and its role in the mistreatment of the Bitkof family,” he said. “Guatemala, a strong ally of the U.S., has every right to terminate this agreement with the U.N.”

In a letter sent to U.N. Secretary-General Antonio Guterres on Friday, Ivan Velasquez, the Colombian jurist who heads the CICIG, defended the commission’s handling of that case and others. The CICIG has never strayed from its mandate of providing information from its investigations to local prosecutors, he said. It was a Guatemalan judge, not associated with the CICIG, who had convicted and sentenced members of the Bitkof family, he pointed out.

Velasquez said the commission had, since 2007, exposed 60 criminal organizations and had helped send 300 people to jail. One of them was the ex-president, Perez, who eventually resigned under pressure and was imprisoned.

In recent days, allies of Morales in Guatemala’s Congress have sought to impeach several judges on the country’s highest court who have in the past ruled in favor of the commission.

Jo-Marie Burt, a Latin American studies professor at George Mason University, said such actions call into question the Guatemalan government’s respect for the rule of law and the independence of the judiciary.

“This is a slow-motion coup,” Burt said. “What you’re seeing is a systematic attack against every individual institution that is trying to defend the rule of law and the constitution.”

She said the Trump administration is short-sighted if it doesn’t appreciate how political instability in Guatemala could spark more migration northward.

“We’re talking about this crisis at the border without talking about what is causing it, which is crises like the one that is playing out in Guatemala,” Burt said.

U.S. Rep. Norma Torres, D-Calif., one of several Democrats in Congress who have called for a reduction in U.S. funding to Guatemala unless the anti-corruption commission is revived, agreed.

“The real crisis that is causing people to come to our southern border is in the Golden Triangle,” she said, referring to the northern Central American countries of Guatemala, Honduras and El Salvador. “We are looking at another Venezuela or Nicaragua.”

Torres knows first-hand how political unrest can fuel migration. She was a child in Guatemala in 1970 when her family sent her to California to escape the civil war.

“They didn’t see a future for me in Guatemala,” she said.

A similar phenomenon has happened more recently in neighboring countries rocked by political conflict, such as Honduras, where a contested presidential election sparked massive street protests and helped fuel outward migration last year. The Trump administration supported the results in that vote, in which President Juan Orlando Hernandez declared victory, even as the head of the Organization of American States called for new elections.

Political drama in Guatemala is likely to hurt the economy, pushing people out, said Claudia Escobar, a legal scholar and former Guatemalan judge.

The country’s main airport in Guatemala City was temporarily shut down last weekend after the government refused entry to an investigator who worked with the CICIG who was returning from vacation. The credit rating agency Moody’s released a statement warning about the potential impact of the expulsion of the CICIG on the economy, though it has not downgraded the country’s rating.

“Investors won’t invest in the country that doesn’t respect the rule of law,” Escobar said.