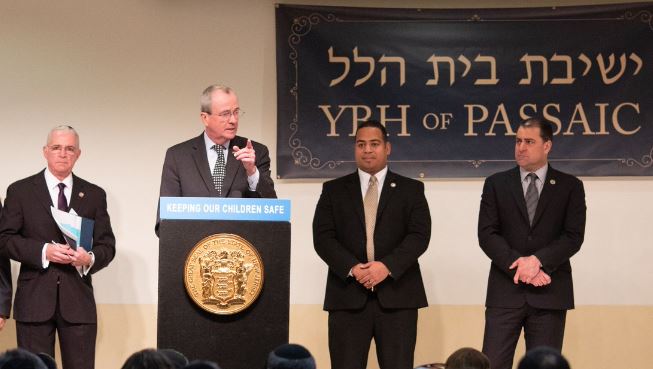 Governor Phil Murphy signed into law a bill that will temporarily double funding for private school security and is seen as a hopeful sign by supporters that the increase will permanently establish higher levels of financing for the security needs of yeshivos and other non-public schools in the state.

At the signing, held at Yeshivas Beis Hillel in Passaic, the Governor also enacted a bill that amends the state’s Non-Profit Security Grant program to expand measures that can be installed at houses of worship under the law.

“Our Administration is tasked with the vital responsibility of ensuring the safety and security of all New Jerseyans,” said Governor Murphy at the signing. “I am proud to sign two bills into law that help ensure that anyone visiting a school, house of worship, or community center may be free of fear and intimidation.”

The school funding bill unanimously passed both houses of the legislature last month.

Since 2015, a bill sponsored by Assemblyman Gary Schaer (D-Passaic) has made a budget allocation for security funding for private schools. The first year it was set at $25 per student and has been steadily raised since then, now standing at $75.

In the wake of the Pittsburgh shooting, Assemblyman Schaer and several colleagues introduced a bill that would deliver increased funding through a supplemental allotment of $11.3 million outside of the regular budget framework.

The bill, which raises funding to $150 per student until the next budget is passed, was co-sponsored by several legislators of both parties.

Although the current bill serves as a bridge between budgets, strong support makes it highly likely that the increased amount will make it into the coming year’s regular allocation.

Monies come from the general fund within the Department of Education for security services and are paid directly to private schools, who can use them for any security-related expenses.

The law adjusting the Security Grant Program will allow for non-profits to acquire target hardening equipment such as cameras and barriers and to hire security personnel.

Rabbi Avi Schnall, director of Agudath Israel of America’s New Jersey office, who was closely involved in lobbying efforts, welcomed the enactment. “Starting today, our schools will be safer than ever before,” he said. “We are grateful to Governor Murphy and all those who stood up for the rights of our schools, our teachers and our children.”