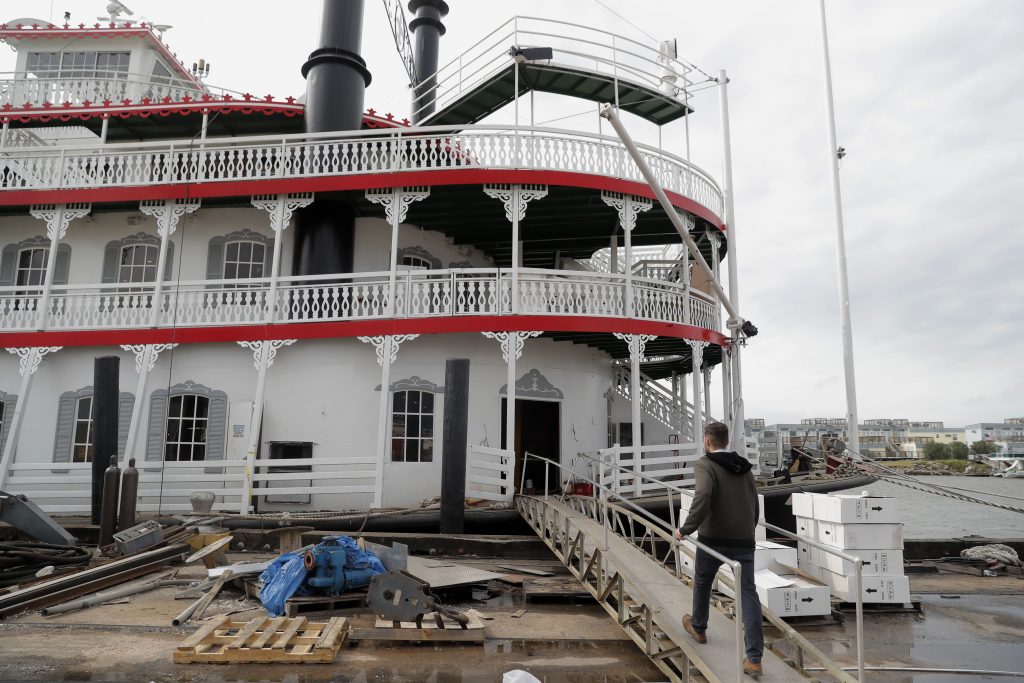 Few experiences capture old New Orleans and the Mississippi River quite like a paddlewheel riverboat coming round the muddy bend with its tooting whistle horn, towering smoke stacks and water-churning propeller.

This month the first new riverboat in more than a decade is set to launch in this Louisiana port city. A plunge in tourism after Hurricane Katrina in 2005 forced the New Orleans Steamboat Company to sell off one of its two boats, but the arrival of the City of New Orleans is a sign of the steadily rising tide of tourists each year to this Southern city of Mardi Gras fame.

“People come from all over the world. It is astonishing. They really want to see the river,” said Adrienne Thomas, marketing director for the company, which also owns another riverboat, the Natchez.

A century ago, countless paddlewheel riverboats plied the Mississippi and its tributaries. Today, New Orleans has two: the Natchez and the Creole Queen, which is operated by New Orleans Paddlewheels.

Now the City of New Orleans is coming full circle, back to the state where it was built in 1991. For years it operated as a casino boat in Rock Island, Illinois, until the mid-1990s. But after that state legalized onshore casinos, the boat became obsolete, said Matthew Dow, project manager heading the vessel’s renovation. The then-named “Casino Rock Island” sat unused for years until it was purchased by the New Orleans Steamboat Company in 2016.

“We instantly fell in love with the boat,” Dow said. “We saw the potential in her and knew that we could do her justice and bring her back not only to her former glory but well beyond that.”

Initially it was brought to a dry dock for hull repairs, then towed to New Orleans for a makeover.

“We had to rip all of the walls out, all the ceilings, a lot of the insulation,” Dow said. “Basically, we had to strip this boat down to the superstructure, to bare bones, and everything had to go back new.”

There were additions, too. A dumb waiter was added to connect the galley to all three decks for food transport, along with passenger elevators and handicapped-accessible restrooms. The Associated Press was given the first look at the new riverboat recently.

Dow says the company is aiming to have the boat ready for tours by Jan. 21, when the Natchez goes into its annual service and maintenance layup. After that, both boats will operate simultaneously.

The two riverboats look similar, both painted red and white with giant red paddlewheels and exterior deck space for close-up views by passengers of the giant propeller. But the new boat has more indoor space.

The Natchez was built in the 1970s for sightseeing with a lot of open deck space, and its main deck is occupied mostly by the boat’s vintage 1925 steam engines, an attraction for passengers. The Natchez is one of only six commercially-operated steamboats left in the U.S.

The new boat is run with a modern diesel-electric system. It takes up less room, allowing for more indoor space for dinner seating, brunches and special events.

“Even though we don’t have the steam engines, we do have the working paddlewheel, and we want to show that off,” Dow said.

As with the Natchez, cruises on the City of New Orleans will include narration about the city and shoreline sights such as the port, historic Jackson Square, the Chalmette Battlefield, which marks the Battle of New Orleans in the War of 1812, and the Chalmette National Cemetery.

And there will be plenty of live band music as the boat plies the Mississippi.

Cyndi Gruenberg of Houston, Texas, rode the Natchez with her husband and two daughters recently and said they learned much about the city.

“It was a great trip, a little bit of history along the river and just a fun ride,” said Gruenberg. “It’s pretty cool. It brings nostalgia back.”

Tourism officials say they don’t expect a shortage of passengers, as the number of visitors to New Orleans has surpassed pre-Katrina levels in recent years.

Stephen Perry, head of New Orleans & Co., which promotes tourism, says the city is “back in every way” with increased hotel and restaurant bookings. Riding a paddlewheel is part of the New Orleans experience, he noted.

“This is one of the most eclectic, authentic places left in America,” Perry said. “People don’t come here only for food and music. What they like is other experiences.

“A paddle wheeler is just one of the great added attractions of imagining yourself in a time gone by.”